DO YOU get the feeling that Bratislava traffic police have grown less willing to let people off for minor offences with a warning? 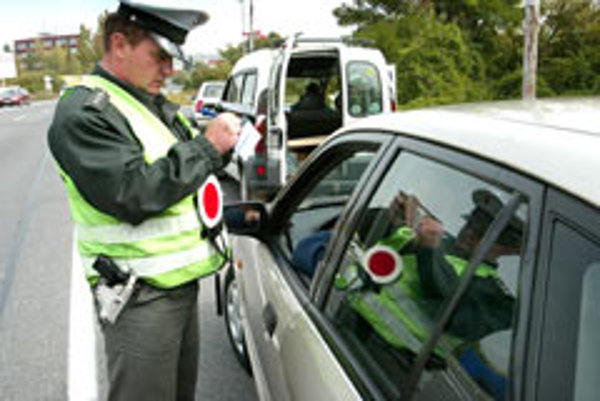 DO YOU get the feeling that Bratislava traffic police have grown less willing to let people off for minor offences with a warning?

You could be right. Since the spring of 2007, Bratislava traffic police have been scored and ranked according to a system that awards them points depending on the size of the fines they issue.
According to documents obtained by The Slovak Spectator, officers who catch a driver with alcohol in his bloodstream, for example, gain 10 points. Citations for drivers who don’t have a valid freeway sticker are worth three points. And if they stop someone who is driving even though their licence has been suspended by a court? Bingo! Thirty points!

On the other hand, the system gives only two points to cops who spend all day directing traffic or escorting convoys.

Those who let offenders of with a warning or a lesser fine (such as Sk500) get half a point, while officers who issue the maximum fine of Sk2,000 get two points.

The points system was initiated by the director of the Regional Traffic Supervision Association (KDCD), Peter Chalupa, who claimed he had wanted to increase police productivity and combat reckless driving. In an interview with The Slovak Spectator, however, Chalupa’s boss, Bratislava Traffic Inspectorate Chief Peter Vittek, promised to cancel it immediately.

“This system was not created on the basis of some analysis, but based on the subjective decision of a single department head,” he said. “Personally I am against it, and that’s why I’m abolishing it.”

What were the points for?

A KDCD policeman, speaking on condition of anonymity, said the points totals for each officer had been used to calculate mid-year or end-year bonuses. “The guys at the top of the list might get Sk3,000, the average ones would get Sk500, and the ones at the bottom would get nothing,” he said.
He added that officers who did not gain a lot of points were bullied – “they were called incompetent in front of their colleagues” – and were under pressure to handle every offence with the maximum possible fine rather than in a non-punitive manner.

“I’ve had it happen that I stop a woman and she starts crying, saying she is on maternity leave and her husband doesn’t earn much, and that she can’t afford to get a Sk2,000 fine,” he said. “In such cases, I want to have the freedom to handle things as my conscience dictates, not according to some points system.”

Given that images from traffic cameras are saved, officers who disobey orders to issue fines for offences or to require offenders to appear before the traffic inspectorate risk being punished by a reprimand or having their wages cut.

Vittek said the points were not used as a basis for calculating performance bonuses – “officers are evaluated in a comprehensive manner, such as according to their willingness to work” – but conceded that the points system could erode public confidence in the police. “People start thinking – ‘you’re trying to gain at my expense. You’re not giving me a fine because I broke the law, but because you want to get points.’ And that is not permissible.”

He also admitted that the points system created “bad blood” between officers, and said the Bratislava Region corps was trying to transform policing into a service “more based on humanity than on statistics and numbers.”

According to all eight regional police corps canvassed by The Slovak Spectator, the points system is not in use in Slovakia. Even the Bratislava Region headquarters denied the practice until confronted with the incriminating documents.

However, according to anonymous tips received from people claiming to be traffic officers in Košice and Komárno, the practice is used there as well.

“As soon as you started asking about it, they took down the charts with all the points,” said one. “The system was introduced by the head of the Košice traffic police, Michal Rusnák. When they come out to check on us at the checkpoints, their first question is how much have you collected, rather than how is your shift going.”

“Among those eight regional headquarters that said they weren’t using the points system, at least one was lying, and that was the Nitra Region,” wrote another whistle-blower. “The points system is in full use at our station in Komárno district. The problem lies with our superiors. Every December, they have a contest to see which district station has collected the most, and the winner gets a trophy. Isn’t that a little sick?”

By press time, the spokesmen for the Nitra and Košice Regions had not responded to a further request for information.