THE LAST time Slovak filmmakers experienced the glamour of the Cannes Film Festival was in 1971, with the premiere of Juraj Jakubisko’s Vtáčkovia, siroty a blázni (Birds, Orphans and Fools). But this year changed all that. 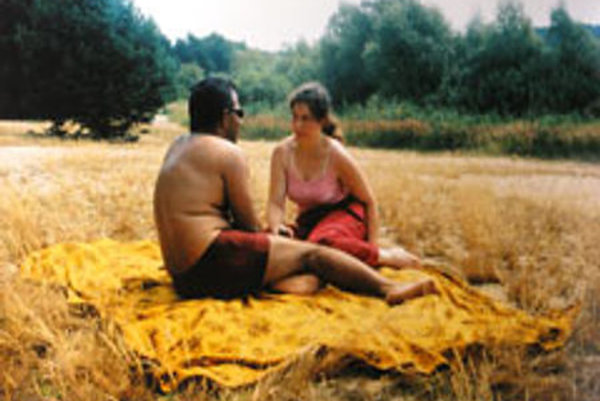 One of the documentary’s stories involves Miro, who has fallen in love with Monika. (Source: Artileria)
Font size:A-|A+

THE LAST time Slovak filmmakers experienced the glamour of the Cannes Film Festival was in 1971, with the premiere of Juraj Jakubisko’s Vtáčkovia, siroty a blázni (Birds, Orphans and Fools).
But this year changed all that.

Slepé lásky (Blind Loves), a documentary by Juraj Lehotský, screened in the famed festival’s Directors’ Fortnight section, which was created in 1969 as a protest against “all forms of censorship and diplomatic considerations”.

Since then, it has held the first screenings of debut films by such renowned directors as Martin Scorsese, Jim Jarmusch, Spike Lee and Sofia Coppola.

Blind Loves, which tells the story of four non-sighted people looking for happiness, received an extremely warm response from both the public and critics. The Screen Daily called it a “charming, thought-provoking curio [that] could easily prove to be a hit on the indie circuit”.

Marko Škop, producer of Blind Loves, who was in Cannes to take part in the festival’s prestigious Producers on the Move sessions, was thrilled with its reception.

“The response was extremely positive,” he told The Slovak Spectator shortly after the screening. “An overwhelming majority of the 850 spectators who saw the premiere were obviously engrossed. The standing ovations lasted for more than five minutes and I even spotted some people whose eyes were filled with tears.”

As well as the audience response, Škop was pleased with the positive reviews the documentary had earned in the international press.

“We are especially grateful for all the great reviews by Screen Daily, Variety, The Hollywood Reporter and many other renowned magazines,” he remarked. “They confirm that Blind Loves deserves wide acclaim, and will hopefully contribute to its further success.”

Indeed, not long after the film’s screening, a number of distributors were negotiating to bring it to their countries, which included most of Europe and even Japan.

The end of the festival held another pleasant surprise for the team behind Blind Loves. Although the Directors’ Fortnight is a non-competitive section, the International Confederation of Art Cinemas (CICAE) gave this “sober, touching and human movie, which stimulates imagination and delivers a positive message” a prize “for the originality of the theme and for the balance between fiction and documentary”.

Blind Loves for those willing to see

Lehotský said he felt extremely honoured to have headed a film selected for the festival.
“It is a tremendous privilege for both me and my colleagues,” he told The Slovak Spectator. “Moreover, I consider this a breakthrough for my future. The Director’s Fortnight section has always represented a milestone in the career of the filmmakers whose works have been screened there. It has enabled them to make more independent movies and to be less influenced by the lack of financial support.”

However, Lehotský noted that screening at Cannes has also created expectations.

“Now I have to show that I deserved this success,” he stated. “It means not slacking off, and to keep putting my heart and soul into the movies I make. The most important thing is, in my view, to stay down-to-earth and surround myself with friends who will help even if I try the impossible.”
Lehotský said his filmmaking comes from the desire for adventure and discovery. This was also the case with Blind Loves, which he decided to make mainly because non-sighted people had always aroused his curiosity.

“Every time I think about making a new movie, I look for my principal inspiration among people whom I consider somehow mysterious,” he explained. “The blind have always interested me, since their perception of the material world can’t be compared to that of sighted people. It was only while filming that I realised these people can live a fully-fledged life, that is, sometimes, even nicer than ours.”

Interestingly, Lehotský’s original intention was completely different from the finished product.
“At the beginning, I wanted to make a feature film about a blind girl who every morning travels in a bus, and meets a man with whom she falls in love,” Lehotský said. “I wanted to show how a non-sighted woman imagines the object of her love, while knowing that she will never see him.”
Lehotský had even started the casting process, when he finally changed his mind.

“I got to know so many interesting people that I decided not to make a feature film, but rather a documentary telling their real stories,” he told The Slovak Spectator. “Now I can say it was a good choice. My actors have taught me to view the world in a different light and understand that happiness rests on details. The real ‘blindness’ does not depend on someone’s being sighted or non-sighted, but rather on one’s willingness to see.”

According to Alexandra Strelková, director of the National Cinematographic Centre in Bratislava, Lehotský’s success is a signal of promising trends for the Slovak filmmaking scene.

“Blind Loves will certainly help to promote other Slovak movies as well,” she stated.

But she emphasised that this was not the first time that Slovaks had attended Cannes.

“The country has set up a promo stand at the Marché du Film [the festival’s business counterpart] for the past five years,” she said. “For the first three years, we shared it with Poland and the Czech Republic, and since 2007 only with the latter.”

Strelková said that the Czech and Slovak stand had attracted a lot of attention and that it would likely result in future important partnerships.

“Many people come to enquire about making films in our country, whether their aim is a co-production or, for example, hiring our professional teams,” she told The Slovak Spectator. “Another objective of our stand is to inform potential distributors about both existing and intended Slovak movies and to make room for Slovak producers who come to Cannes to seek a foreign partner.”

Strelková expressed her belief that Slovak cinematography has recently begun flourishing, with Blind Loves being a prime example of how even smaller projects can win the hearts of the discerning audience at Cannes.

“We have the potential,” she said. “Now we must learn how to put it to good use.”