HZDS haunted by its past

THE MOVEMENT for a Democratic Slovakia (HZDS) has been struggling for international acceptance since the party led by former prime minister Vladimír Mečiar drove Slovakia to the verge of international isolation back in 1997. 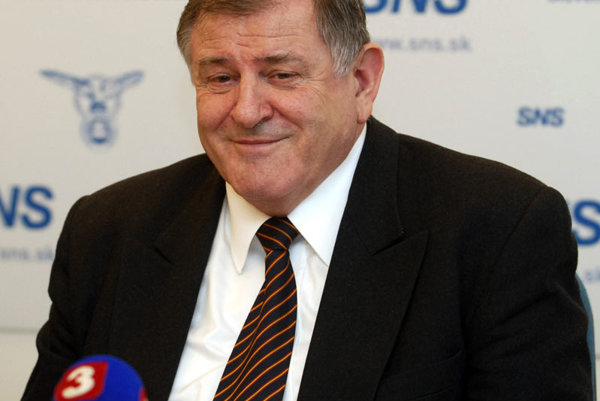 Movement for a Democratic Slovakia boss and former prime minister Vladimír Mečiar remains unacceptable to some European Democratic Party members. The HZDS has been knocking at the door of the European political grouping, seeking full membership. (Source: ČTK)
Font size:A-|A+

THE MOVEMENT for a Democratic Slovakia (HZDS) has been struggling for international acceptance since the party led by former prime minister Vladimír Mečiar drove Slovakia to the verge of international isolation back in 1997.

So it was crossing its fingers while the European Democratic Party (EDP) met in Bilbao, Spain on June 6 to decide whether to upgrade the HZDS from observer status to full-fledged member.

After the meeting, Yannick Laude of the French liberal UDF, which had opposed the upgrade, confirmed that the HZDS had been upgraded, but only to associate membership, which is one step below a full member.

"We granted them just an associated membership in the EDP," Laude told the TA3 news channel. "We do not have problems with members of this party, but we have a big problem with Mr. Mečiar."

Graham Watson, chairman of the Alliance of Liberals a Democrats of Europe (ALDE), of which the EDP is a faction, said he could even imagine the HZDS members of European Parliament - Irena Belohorská, Sergej Kozlík, and Peter Baco - joining the group as full members.

"If they successfully complete the integration into the European Democratic Party, it is only natural that we will welcome them in our club," Watson told the SITA newswire in May.

But HZDS vice-chairman Milan Urbáni, who represents his party on the EDP Council, and Mečiar were quick to accentuate the positives of the EDP's decision.

"International isolation is over," Mečiar heralded at a press conference in Brusno on June 7. "It is in the past. The potential to find coalition members has improved, the international situation improved, and the internal building of the party has been improving."

The move gives the HZDS the right to participate in EDP activities, including voting, HZDS vice-chairman Milan Urbáni said at the party's national executive session in Brusno spa on June 7.

Urbáni explained that the change in status means that HZDS MEPs don't automatically become members of the EDP, but can ask for membership individually.

"I consider this acceptance a success for the party," Urbáni said in Brusno. "It is the result of what the party has done since the referendum on joining the European Union, through Schengen, to the Lisbon Treaty."

Several EDP representatives voiced their opposition to accepting the HZDS as a full member.

French and Czech representatives said the resistance centred on the party's past and its chairman.
"His past is very controversial," Francois Bayrou, head of the French UDF, told the Sme daily on June 7. "We cannot betray the present for the past. We will give the party one year to grow."
Josef Brož, the Secretary General of the European Democratic Party, was even more critical.

"The HZDS has its negative past, it is connected with certain stances towards the EU," Brož told Hospodárske Noviny financial daily on June 9. "It is viewed as a party that has always been led by Vladimír Mečiar."

Watson said his main problem was with Slovakia's adoption of the Press Code.

"Some parts of the Act can undermine the press's freedom to write and criticise openly," he told Hospodárske Noviny.

Grigorij Mesežnikov, head of the non-governmental Institute for Public Affairs think tank, said that Mečiar is infamous throughout the European political community for his undemocratic moves between 1994 and 1998.

"Mečiar acted like an authoritarian," Mesežnikov told The Slovak Spectator.

Mesežnikov also questioned whether the HZDS is a liberal party.

"It is nationally oriented party, which is more conservative from the cultural point of view," he said.

Mesežnikov listed the abduction of then-President Michal Kováč's son in August 1995, which allegedly involved the intelligence service, as one of the affairs the HZDS cannot put out of people's minds.

Others are the unconstitutional expulsion of MP František Gaulieder from Parliament in December 1996 and the failed referendum on whether Slovakia would join NATO, according to Mesežnikov.
The NATO referendum was announced in March 1997 by former President Kováč, but the Mečiar government never distributed the ballots.

This resulted in Slovakia being on the receiving end of criticism from the EU and the United States.
Political analyst Miroslav Kusý said that HZDS' past is simply "too dark to bring the HZDS into decent society".

Moreover, the HZDS is still led by Mečiar, who is not acceptable to European structures, he said.
"He is simply persona non grata," Kusý told The Slovak Spectator. "To move beyond its past, the HZDS would have to get rid of Mečiar. But then it would not be the HZDS any more."

Kusý said that the HZDS declared itself a rightist party, but is now backing leftist policies.
"They have no agenda at all," Kusý said. "They just have the personality of a leader, who dictates the direction they shall take."

The HZDS tried for several years to join the European People's Party, but the Slovak Democratic and Christian Union (SDKÚ), Christian Democratic Union (KDH) and Hungarian Coalition Party (SMK), which are already members, opposed it.