You can help in many ways other than donations

Východoslovenská energetika a.s. (VSE) recognizes and accepts its role as a responsible citizen of the region. The financial support it provides to worthwhile projects is only one way in which it fulfils this task. Through their actions and activities, the company’s employees are also trying to help create a closer and more open relationship between VSE, the region and the community. Several hours of well-directed and selfless work for the community can often mean more than a financial gift. 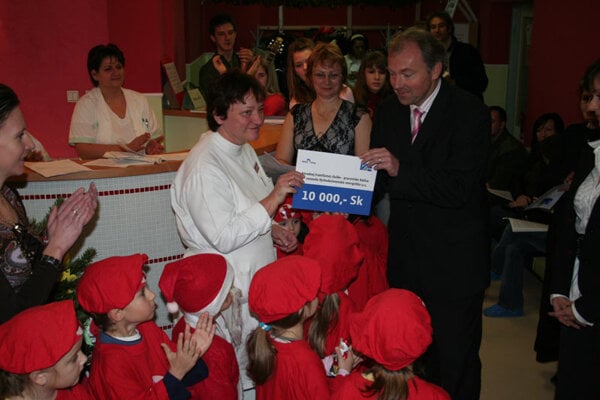 Východoslovenská energetika a.s. (VSE) recognizes and accepts its role as a responsible citizen of the region. The financial support it provides to worthwhile projects is only one way in which it fulfils this task. Through their actions and activities, the company’s employees are also trying to help create a closer and more open relationship between VSE, the region and the community. Several hours of well-directed and selfless work for the community can often mean more than a financial gift.

Since 2006 our employees have been actively participating in voluntary activities organised by the company. We started by building an educational forest trail at Smolnícka osada, in the Slovenské Rudohorie mountains (Slovak Ore Mountains). A total of 15 employees took part in the work, clearing the trail and erecting information boards. “Apart from the results of the physical work, a significant benefit was the social aspect. Volunteering became an unobtrusive form of teambuilding for people from different positions within VSE,” adds Head of Communication Andrea Danihelová. Even German trainees from VSE’s parent company, RWE, came to volunteer during the clearing of the trail.

Even a Little Can Be a Lot

One needs to sacrifice only about an hour of time and half a litre of blood in order to save someone's life. This is one of the reasons why voluntary blood donation, in cooperation with the Red Cross and the National Transfusion Service (NTS), has become a tradition in recent years. For example, in 2007, over 30 of our employees donated blood.

Our employees also donate blood on their own initiative and there is at least one voluntary donor in almost every place of work in Eastern Slovakia. With the aim of attracting new donors, VSE decided to organise a common blood donation opportunity once a quarter. As a result, either we regularly visit the NTS site in Košice, or their mobile blood donation station comes to our meeting rooms of VSE. "It is exactly this form of donation that is preferred both by our regular donors, because it is not time-consuming, and by us, because we have gained several first-time donors through it," explains A. Danihelová.

From the viewpoint of the number of participants, the most successful project so far has been the project Reading Fairytales for Visually Impaired Children. Almost 30 employees participated in reading the book Smile Little Heart onto CDs in 2007. This fairytale book is available at branch offices of the Union for the Visually Impaired in Slovakia and in schools for visually impaired children in Eastern Slovakia.

The success of the project has been confirmed by people’s willingness to continue taking part. Readings should take place again in the autumn – this time in cooperation with the Slovak Library for the Visually Impaired in Levoča.

Common Energy for a Million

This is the name of a grant scheme within the framework of which VSE divides 1 million SKK each year. Through individual grants of up to 30,000 SKK each, we support individual employees who help their community through voluntary work in sport clubs, dance ensembles, hiking groups and, by doing so, also give socially-disadvantaged children an opportunity to take part in sports and meaningful activities.

Employees can apply for support from this scheme in two rounds each year. VSE will reward each hour worked by an employee, or each donated crown, by three times their value. “Thanks to this scheme we found that we have many activists among our colleagues about whom we had no idea,” says A. Danihelová, evaluating the scheme. The numbers also demonstrate its success. 22 employees applied for support across both rounds in the first year, whereas this year almost 40 applied in just the first round.

Quality Will Be the First Priority

And how will volunteering at VSE continue? We know that the number of volunteers in our company will not grow geometrically. Nor is that the goal. It is more important that voluntary work becomes a part of the CSR mosaic at VSE that cannot be overlooked. Therefore, in the years to come we would like to focus on making sure that projects in this area are worthwhile and do justice our slogan from the introduction: “to be a responsible citizen of the region”.