ADVERSE weather conditions on June 7 stymied the efforts of six BASE jumpers, who had been planning to spend the day leaping from the observation platform of the UFO Café which crowns Bratislava's Nový Most, according to the SITA newswire. 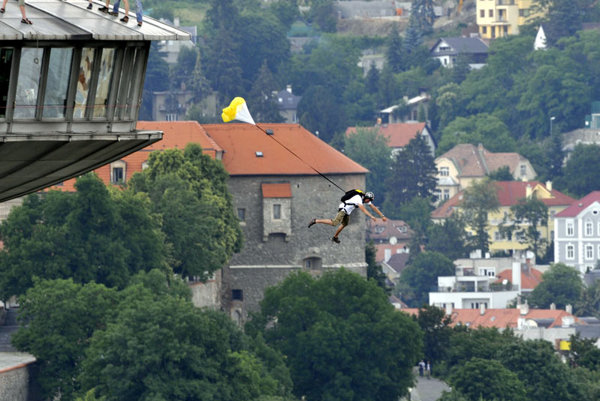 BASE jumping is one of the most popular, and dangerous, adrenaline sports. (Source: ČTK)
Font size:A-|A+

ADVERSE weather conditions on June 7 stymied the efforts of six BASE jumpers, who had been planning to spend the day leaping from the observation platform of the UFO Café which crowns Bratislava's Nový Most, according to the SITA newswire.

The experienced professionals were supposed to make as many as 60 jumps from the platform, 95 metres up, as part of the first legal BASE jumping event in Slovakia. They included Slovak Roman Dubský, who won third place at the European Cup for sky-diving, and the world record-holder, German Hannes Kraft. American jumper Amanda Vicharelli refused to take part in the afternoon session because of unfavourable wind conditions.

The wind - and the delayed opening of a parachute - almost proved fatal for one jumper. During the morning session, he landed among traffic on the New Bridge, breaking both his ankles.
BASE jumping is one of the most dangerous adrenaline sports in the world, and also one of the most popular. At first glance, it resembles normal sky-diving. But participants leap from fixed points only 100 to 200 metres above ground. These include buildings, antennas and poles, bridges, cableways and cliffs. BASE jumpers have no reserve parachute (there is not enough time to deploy one) and must rely on a single, specially-designed canopy. They normally have just a split-second to correct their direction of fall and landing point.

Slovaks triumph in battle of the fish soup cooks

THE WINNER of the fifth annual fish soup-cooking competition, which took place in Bratislava's Hviezdoslavovo and Rybné Squares on June 7, was chosen by several thousand people, Vladimír Tomčík, head of the Devínska Brána association, told the SITA newswire. They were able to choose from among more than 40 teams from Slovakia, Austria, Hungary, Serbia, Bulgaria, Italy, and India. Also competing were teams of soldiers, railway policemen and musicians, as well as the mayor of the nearby Austrian town of Hainburg, according to Tomčík.

The first three places were won by Slovak teams, chosen as the best by visitors to the Old Town, as well as soup testers. The Emergency team came out on top, followed by the Orava Team, and then a team composed of former members of the folk group Lúčnica - Family Tree.

Teams began preparing their fish soup at about 15:00, with recipes ranging from Hungarian halászlé, to Russian ucha, or soľanka, traditional Slovak fish soup with cream, French bouillabaisse, and old family favourites. Two hours later, visitors to the city centre could try the soups and judge the teams.

"Every visitor got five paper pieces and a small marble. After handing the paper ticket to the team of their choice, each got to taste their soup, and then rewarded the team whose soup they considered the best with the marble," Tomčík explained. He said the event had gone very well, attracting a good number of participants, and he stressed the excellent atmosphere, as well as the favourable weather. The event was organized by Devínska Brána in co-operation with the Old Town of Bratislava.

"I WAS born here, more than 70 years ago... I used to bathe here, my brother was a head doctor here." Such comments could be heard on June 8 in Koch's Garden in Bratislava's Partizánska Street, one of the gardens opened to the public during the Weekend of Historical Parks and Gardens of Bratislava, on Saturday and Sunday, June 7 and 8.

Koch's Garden was only open on Sunday afternoon. It was the only one among the seven included in the event which is not normally accessible to the public.

So visitors had just a single afternoon to wander its narrow paths, among the thicket of precious trees, enjoy the moss-covered benches, disturb the lover's stone statues, stir the water in a small fountain, or examine the small pool which used to serve the female patients of the Koch sanatorium.
The garden, along with its adjacent private sanatorium, was built in 1932 by the surgeon Karol Koch. The sanatorium building bears the signature of the noted Slovak architect Dušan Jurkovič, while the garden, covering half a hectare, was created by the gardener Jozef Mišák. About 120 species have been planted here, many of them rare and unusual in Slovakia, such as the Florida calycantus.

Since 1981, the venue has been a national cultural heritage site. The garden was later made a preserved place of Slovakia.

The other six Bratislava gardens and parks were also full. Liszt's garden hosted the historian Pavel Dvořák, who narrated his Forgotten Stories about Bratislava. The Botanical Garden offered an exhibition of bonsais, cactuses and objets trouvé, while in Horský Park visitors learned from their calls which bird species live there. The Grassalkovič Garden, the Medical Garden and the Park of Janko Kráľ also offered programmes for thousands of people attracted by the event.

"The goal of the event was to attract as many citizens and visitors as possible to Bratislava's parks and gardens," the head of the event, Michaela Chalupová, told the SITA newswire shortly before it started. "We want to showcase parks not just as a unique natural cultural heritage, but also as places crucial for people's mental and physical health."