SLOVAKS appear to be neither dismayed nor impressed by Ireland’s ‘no’ vote on the European Union’s Lisbon Treaty. Irish political representatives say they hope the European Union (EU) will find a solution to the situation, since the vote has effectively blocked union-wide adoption of the treaty. Meanwhile, top Slovak politicians commenting on it have expressed more concern about the EU’s policy on inflation than about the storm brewing in Brussels. 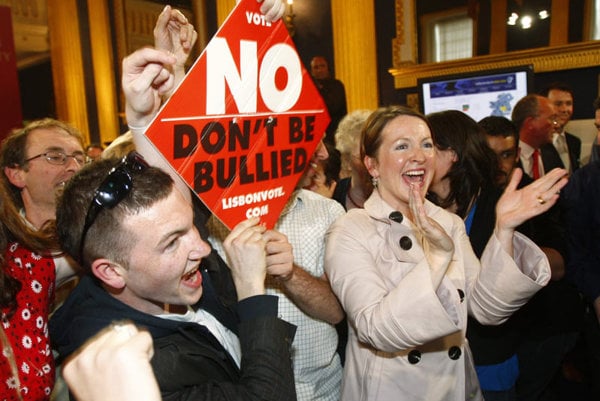 Ireland will reflect on and analyse the outcome. (Source: Reuters)
Font size:A-|A+

SLOVAKS appear to be neither dismayed nor impressed by Ireland’s ‘no’ vote on the European Union’s Lisbon Treaty. Irish political representatives say they hope the European Union (EU) will find a solution to the situation, since the vote has effectively blocked union-wide adoption of the treaty. Meanwhile, top Slovak politicians commenting on it have expressed more concern about the EU’s policy on inflation than about the storm brewing in Brussels.

A clear majority - 53.4 percent - of Irish voters voted to reject the Lisbon Treaty in the referendum, held on June 12, 2008. Turnout was 53.1 percent of the electorate.

The Lisbon Treaty was signed by EU leaders in December last year, but must be ratified by all the EU’s 27 member states before it can come into force. Irish law requires that a referendum be held on any changes to the country’s constitution: as a result, Ireland’s voters were the only ones in Europe to be offered a direct say on the treaty. The EU’s other 26 states have all opted for parliamentary ratification.

The treaty, which aims to streamline decision-making in the enlarged EU by introducing voting reforms and reducing the size of the Commission, and which would create the new posts of Council President and High Representative for Foreign and Security Policy, was agreed after earlier efforts to pass a European Constitution foundered following the constitution's rejection by French and Dutch voters in referendums in 2005.

The fate of the Lisbon Treaty is now unclear. The Euractiv website, which covers key EU policies and news, reported that “the Irish result has thrown the EU into an existential crisis.”

Ireland’s foreign minister, Micheál Martin, said in Luxembourg on 16 June that it is "far too early“ to seek a solution to the Irish rejection of the treaty. He told reporters: „The people's decision has to be respected and we have to chart a way through... It is far too early for proffering any solutions or proposals”.

“There are no quick-fix solutions,“ Martin stressed.

Hilda Ó Riain, chargé d'affaires at the Irish Embassy in Bratislava, told The Slovak Spectator that a range of concerns were aired during the campaign. “At times, those on the No side differed strongly on why they opposed the Treaty. This makes it particularly difficult to draw conclusions and lessons from this result”, Ó Riain said. She added that it was too early to speculate on future options: “This is a time for reflecting on, and analysing, the outcome. It is not a time for making decisions about what might happen in the period ahead.”

“The Irish Government's first step will be to reflect on the result and to consult widely about it. There will be an opportunity at the European Council in Brussels to discuss the situation with our EU partners.” Ó Riain stressed.

She was also optimistic about the EU’s resourcefulness in finding solutions, saying: “We have been in this situation before and have always found an agreed way forward.”

Following the result, EU foreign ministers met in Luxembourg to discuss its implications. They agreed that the ratification process should continue in other countries in spite of the Irish rejection.

According to German Foreign Affairs Minister Frank-Walter Steinmeier, “there is just one alternative - to continue the ratification process. It is not an easy situation. We must find a way out, together with Ireland.”

At a summit of prime ministers of the Visegrad Group of Central European countries, Slovak premier Robert Fico said that the Irish result cannot overshadow, in his opinion, steep rises in gas and food prices.

“It would be bad if the weeping over the Lisbon Treaty were to dominate,” Fico said.

Among Slovak politicians, the treaty’s rejection was welcomed only by a breakaway group of former Christian Democratic Movement (KDH) MPs, reported by the SITA newswire.

Political analyst Ivo Samson told The Slovak Spectator that the EU was likely to find a solution to the situation caused by the Irish ‘no’ vote.

“The EU will probably rely on Irish politicians persuading Irish voters to approve this treaty in a future referendum,” Samson said. A similar process followed Irish rejection of the EU’s Nice Treaty in 2001; after amendments, the Irish voted to approve it in a subsequent referendum in 2002.

“If this scenario is repeated, nothing bad will happen for the future of Europe,” Samson added.
According to him, the number of Euro-sceptics who welcome the negative result is not large.

“The majority of people are neither happy, nor unhappy. They are totally indifferent,” Samson said.
EU issues are perceived as unimportant in Slovakia, he added. Slovakia recorded the lowest turnout among all EU members – just 16.9 percent of eligible voters - for European parliamentary elections in 2004.

“Interest in the EU is very low in Slovakia, perhaps the lowest in the whole EU,” Samson〜 told The Slovak Spectator.

James Thomson  contributed to the report.