IN a nightclub, Rika, a woman who is as small as a toddler, dances with white angel wings on. After her performance, an old man picks her up and tells her how cute she is, and that he wants to take her home with him. Rika, knowing that she’s powerless to stop him, just waits until the man puts her down. 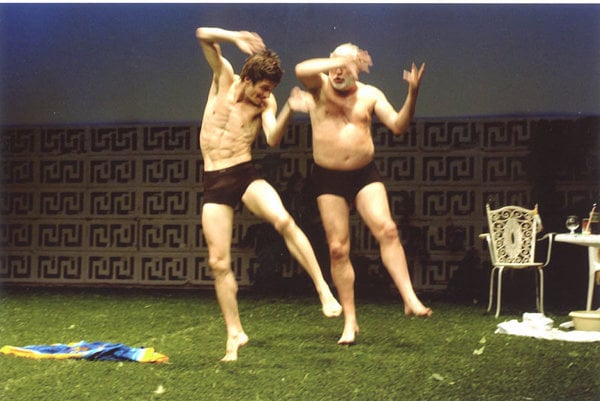 IN a nightclub, Rika, a woman who is as small as a toddler, dances with white angel wings on. After her performance, an old man picks her up and tells her how cute she is, and that he wants to take her home with him. Rika, knowing that she’s powerless to stop him, just waits until the man puts her down.

This is one of the scenes from a film used as part of Le Jardin (The Garden), a performance by the Belgian The Peeping Tom Collective at the conclusion of the Bratislava in Movement dance festival on June 17.

“Such experiences are a part of Rika’s life,” Simon Versnel, who plays the old man in the film, told The Slovak Spectator. “We could not believe that, but strangers, especially men from off the street, touch her like a baby, and do what I do to her in the film.”

Meeting Rika Esser, who is just 82 centimetres tall, inspired the Peeping Tom Collective to make the film, which led to a trilogy, of which Le Jardin is the first part.

“Rika talked about her life, which was for us very special, because you have no idea what a person like this experiences,” said Versnel. “She is a tough lady, very intelligent. She is always on the frontlines [fighting for rights of such people].”

Franck and Gabriela knew they wanted to make a film and have Rika in it, but she refused at first. She agreed only after getting to know them and realising that their intentions were sincere, according to Versnel. But she asked to have scenes in which she experiences her daily life. So the filmmakers put in scenes such as when she encounters a large dog whose head is at the same height as hers.

“Coming literally face-to-face with a dog happens to her six times a day,” said Versnel. “Of course she is not afraid any more.”

They shot the film in the centre of Brussels in 2001, in the African nightclub Le Numero uno. It is largely an unknown club because it belongs to another world, parallel to, beneath or above the outside world, the ensemble writes in its materials about the club. It gives the film an atmosphere of a dream or a nightmare.

After making the movie, the group talked a lot about the definition of normal, and abnormal, and how people look from the outside.

This led to Le Jardin, which was completed in 2002. It consists of the 35-minute film starring Rika and Versnel along with Chartier and Carrizo and a live dance performance, featuring all of them except Rika.

“The piece continues our train of thought, but in a different way,” Versnel told The Slovak Spectator. “The old man says that he lost everything in life and the couple loves each other, but is fighting, like in everyday life.”

“For me is already more reality that you get older, your friend get older and people die and you lose and this is what I tell in the play,” said Versnel.

One of the most powerful moments is when Versnel dances alongside Chartier, a much younger man who’s in perfect shape.

In some ways the film prepares the audience for what it will see in the dance performance and see the contrast.

“I think the film must be shown before a live performance, otherwise that contrast won’t work,” Miroslava Kovářová, the director of the contemporary dance festival, told The Slovak Spectator. “This is an extremely well thought-out performance and the theme of defining what is normal would not work without this film.”

After the success of Le Jardin, the Peeping Tom Collective made a second part, Le Salon, in 2004. In it, the character of the old man reappears, but he is losing his grasp on reality. The ensemble completed the trilogy in 2007 with Le Sous Sol, which revisits the characters from Le Jardin and Le Salon after they have died.

“The Slovak dancers were spellbound,” Kovářová told The Slovak Spectator after the performance. “They were fascinated by the concept, by the way the dancers moved, by how truthful it was, and by how many layers it had.

“After the performance one of them came to me and said ‘I now know what I want to do.’”