When the kids aren’t alright

Milica, a 45-year-old lawyer, watched in horror from her car as she waited to pick up her 15-year-old daughter outside Bratislava’s Dopler discotheque last spring. 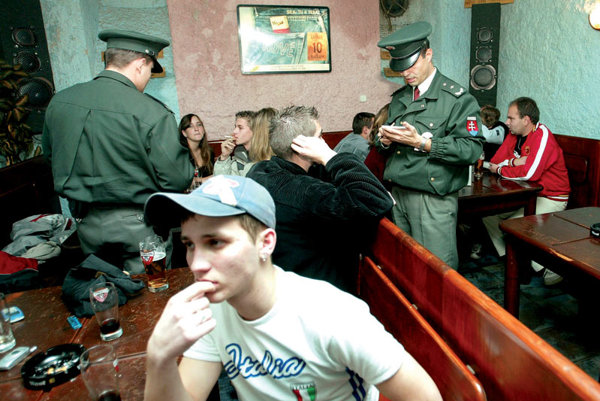 From now on, teenagers under 18 will be barred from pubs and discos after 23:00, sparing them the nuisance of police raids. (Source: XXXXX)
Font size:A-|A+

Milica, a 45-year-old lawyer, watched in horror from her car as she waited to pick up her 15-year-old daughter outside Bratislava’s Dopler discotheque last spring.

“It was past two in the morning, and I saw a bunch of boys pulling a young girl along with them who was so drunk she didn’t even know where she was,” the mother of two recalled. “She was wearing a tiny miniskirt, and they were grabbing her everywhere. All around there were teenagers who looked like they were drunk or on drugs. I trust my daughter, and there’s no way I could forbid her to go out, but I was totally shocked by what I saw.”

For parents like Milica, their first encounter with the drinking habits of modern teenagers can be an electrifying reminder of how much has changed since the days of Pioneer Camps and “zemiakovej brigady”. Surveys show that Slovak adolescents are among the heaviest drinkers in Europe, and that the problem is getting steadily worse.

Slovak law makes it illegal for bars to serve alcohol to anyone under 18, but the rules are rarely enforced. A local tabloid last month conducted a test with a pair of 13-year-olds and found that they were served beer and hard liquor at five of the seven Bratislava pubs they tried. “A few weeks ago my husband and I actually had intervene with a group of drunk teenagers on the street at 9:30 at night, and take care of a girl who was particularly intoxicated,” said Milica. “There were police around, but they were doing nothing about it.”

In May, the ruling coalition passed a law that harks back to socialist discipline – teens under 18 will be barred from discos after 23:00 unless accompanied by an adult, while pornography will be banned from newsstands and gas stations. The law has been slammed by opposition politicians as a blast from the country’s Communist past, but Milica, who has traveled widely since 1989, is in favor of it, despite her liberal beliefs.

“It has nothing to do with democracy, it’s about setting the rules of the game,” she said. “If it’s illegal to drink in some US states until the age of 21, there must be some reason for it. These kids are not mature enough to know about alcohol, so of course they try everything they can get their hands on. As a mother, I really welcome such a law. Something has to be done.”

If memory serves, growing up in Canada in the 1980s we spent much of our time trying to figure out ways to get our hands on some alcohol, and a lot less actually drinking it. As soon as our voices were fully broken and our teen acne was under control, we were butchering our driver’s licenses to make out that we were 19, or hanging around liquor stores trying to convince customers of legal age to buy beer for us. “Getting served” was a moment of triumph for a high school student, and something that only the boldest and coolest among us attempted in an actual bar.

In the early 1990s I found myself teaching English to high school students in what was then still Czechoslovakia. Even allowing for differences in geography, culture and decade, it took a while to get used to the relative freedoms that Slovak teenagers enjoyed. On my first night in the student hostel where I was lodged, one of my future pupils lowered a bottle of beer on the end of a rope to knock against my window. And then another. The nearest pub served teachers on the top floor and largely students in the basement; not that the teens would have felt constrained drinking among their supposed guardians, but the booze was cheaper downstairs.

And it wasn’t just the alcohol. It goes without saying that all kids smoked, and no one was ever refused a purchase of tobacco. Slovak teens, and indeed everyone over the age of about eight, were also daily exposed to hard-core pornography at local newspaper kiosks. Those who didn’t understand the meaning of such titles as “Ass-Bangers in Action” had only to consult the accompanying illustrations.

Of course, this was all part of ‘freedom’, and if no one had yet figured out how to filter out the grosser and more sordid bits, it was still a thousand times better than what had gone before. It was just life, with no one to take care of it, and for all their bewilderment and material discontent, those teens were a heart-rending mixture of innocence and its opposite.

Fifteen years later, that collective innocence has disappeared, and weary experience has taken its place. Teens still get served in bars, but now they have the money to get as drunk as they want, which for many is as drunk as they can. They are no longer just observers or consumers of pornography, but with their mobile phones and adolescent imprudence are increasingly producers of it.

“The trend is clearly towards increased alcohol use among teenagers, as well as a lower age of the user,” said child psychologist Štefan Matula, chairman of the Detský fond Slovenskej republiky (Slovak Children’s Fund) NGO. “In regular Europe-wide surveys, we fare poorly, and it’s getting worse.”

In the last survey performed by the European School Project on Alcohol and Other Drugs (ESPAD) in 2003, Slovak high school students reported rates of drinking second only to Sweden.

Everyone who has kids claims to know what the problem is – that parents have too little time to spend with their children, while teens have too little to do while on their own. It’s just as clear that no quick fix exists – real estate developers continue to eat up what little green space remains in the capital, schools continue to cut extra-curricular clubs, and parents continue to work longer hours.

Hence the new law, which its backers claim will help working parents by restricting their children’s alcohol use, but will not interfere with the content of their parenting. “We’re not claiming that the law will achieve some kind of dramatic change, but we want to help parents who want to raise their children in a healthy and intelligent way,” said MP Ján Podmanický from the ruling Smer party, one of the law’s sponsors.

“There are many influences that are destroying the traditional family,” agreed Deputy PM Dušan Čaplovič. “Today’s parents may leave their kids to play outside with a key around their necks, while many work two shifts.”

Psychologist Matula said that he had “no problem” with such legislation. “The risks that arise from alcohol use are far greater than those associated with restrictions on visits to pubs. This law will also not bring about any huge change, but it will bring us closer to European norms.”

Opposition MPs fought against the law – “the state should interfere with parenting as little as possible, and leave it up to the parents,” said Lucia Žitňanská of the SDKÚ – but with the government behind it, they could do nothing to prevent its passage in the May parliamentary session.

Some of the law’s other provisions are more controversial, such as a proposed Supervisory Council for the Protection of Youth, which will compile a list of places and events that should be off-limits to children, as well as report offensive media reports to the authorities. Matula also questioned the sense of banning the sale of pornography when it was available for free on the Internet.

However, coalition MPs said that it was better to do something about teenage drinking and exposure to pornography than to give up in despair.

The law even enjoys support among people opposed to social engineering, and who criticize Robert Fico’s nationalist-socialist government.

“I’m against any limitations on personal freedoms, but I think that children have no place in pubs at night,” said František Šebej, a former MP with the liberal Civic Conservative Party (OKS), and now a commentator with the conservative weekly Týždeň. “It has nothing do with liberalism or Communism but with the protection of children who are at risk, and I honestly don’t see any elements in this law that remind me of the totalitarian era.”

Pub owners, predictably, see no need for restrictions on their clientele, just as they flatly reject the notion that they serve drinks to underage patrons. But even teenagers themselves are not entirely opposed to the idea.

“In hindsight, I can see that some rules would be a good idea,” said Barbara, now 16. “At a lot of discos you get some kind of bracelet if you are under 18, which means they’re not supposed to serve you alcohol. But it’s not a problem to find someone older to buy it for you, while some girls will carry alcohol in their bags and then just buy coke to add to it.”

At the same time, she said, reaching for her mother’s hand, she doubted that a law requiring disco-going teens to be accompanied by an adult would work in practice. “I go out to meet new people and have fun,” she said. “I can’t imagine what it would be like with my mum sitting across the table from me.”

Children under 15 will not be allowed to visit nightclubs, and will be allowed in restaurants only until 23:00;
Teenagers aged 15-18 will only be allowed to visit nightclubs after 23:00 in the company of an adult;
Sex shops, betting shops and slot machines will be off limits to young people;
Pornography will be banned from sale at newsstands or gas stations;
Media content will be more strictly supervised for suitability for children;
A supervisory organ will be set up under the Ministry of Labor, Social Affairs and Family that will compile a list of media, events and establishments considered harmful to children.