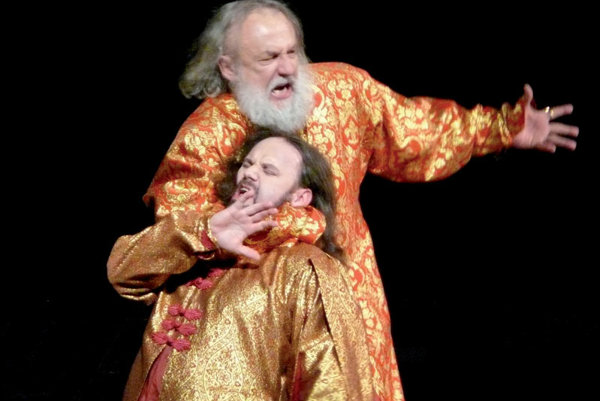 SND’s opera ensemble premiered the only opera that Modest Petrovich Mussorgsky completed on April 25 and 26. Opera lovers can see the opera in its full length, the first time it has been thus presented since its first production in Petersburg in 1874. Because this enactment of the story of the Russian ruler Boris Godunov from the early 17th century lasts almost four hours, performances of this opera start at 18:00. Visitors can look forward to spectacular scenes, more than 500 costumes, and excellent performances by the singers and other musicians.

The KY-TIME program is dedicated to Jiří Kylián, a Czech choreographer who established himself abroad and who since 1976 has been the artistic director of the Nederlands Dans Theater, where current SND Ballet director Mário Radačovský danced in the 1990s. KY-TIME, premiered on May 16, includes choreography work by Kylián (Un Ballo, Six Dances), Radačovský (’68, Inspiration), and Lukáš Timulák (Real Time).

The SND will resume operations in September, at which time opera and ballet lovers can look forward to two new operas as well as two ballets. On November 7, the SND Opera will premiere Svätopluk by Eugen Suchoň, and on December 5 Orfeo ed Euridice by Christoph Willibald Gluck. The ballet will premiere Ivan The Terrible by Sergei Sergeyevich Prokofiev on September 19 and The Nutcracker by Pyotr Ilych Tchaikovsky on December 19.

Performances begin at 19:00 unless stated otherwise.
Go to www.snd.sk for dates and programs. Opera and ballet performances take place in the historical building of the Slovak National Theater on Hviezdoslavovo Square or in the new building on Pribinova Street.