SLOVAKIA'S Constitutional Court has overturned the Supreme Court's extradition order against Mustapha Labsi, an Algerian national wanted in his home country for alleged links to terrorist groups, including the Al–Qaeda network. 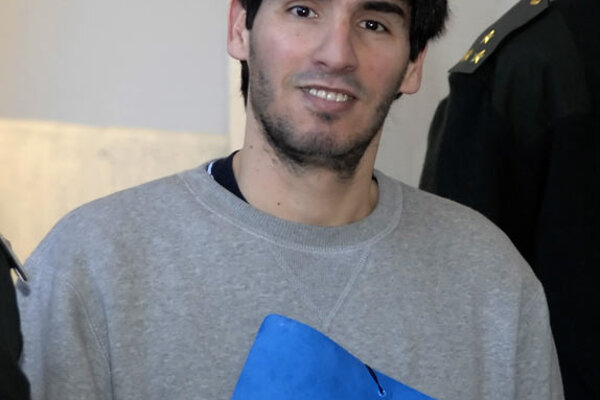 Mustapha Labsi will not be extradited, for now. (Source: ČTK)
Font size:A-|A+

SLOVAKIA'S Constitutional Court has overturned the Supreme Court's extradition order against Mustapha Labsi, an Algerian national wanted in his home country for alleged links to terrorist groups, including the Al–Qaeda network.

The Court ruled that Labsi's human rights were violated when the lower court ordered him to be extradited without considering the veracity of Algeria's guarantee that he would not be tortured upon return.

The Justice Ministry has not commented extensively on the ruling, while Amnesty International and Labsi's lawyer are calling it a victory for fundamental human rights.

In 2005, Labsi was convicted in absentia in Algeria for links to terrorism, but was temporarily detained as he travelled across the European Union.

In April 2006, France sentenced him to five years in prison for allegedly planning terrorist attacks and using false documents, but released him on time served. Last year, he was arrested while crossing from Austria into Slovakia, where has a wife and child.

The Bratislava Regional Court was the first to order that Labsi be extradited to Algeria, followed by the Supreme Court, which upheld the order on January 22.

Jozef Skybjak, spokesman for the Constitutional Court, stated on June 26 that the extradition order had violated Labsi’s right "not to be tortured, nor subjected to cruel, inhumane, or humiliating treatment."

The Justice Ministry has commented that it is still studying the ruling. But in a statement to The Slovak Spectator, ministry spokesman Michal Jurči warned that Slovakia should not become a haven for terrorists.

"We consider terrorism and organised crime a cancer of society that must be tirelessly opposed," the statement reads.

In contrast, the Slovak branch of Amnesty International (AI) welcomed the ruling as proof that the Constitutional Court protects human rights.

Moreover, Branislav Tichý, the head of the AI's Slovak office, said the ruling reflected the Court's commitment not to extradite suspects to countries where they could face torture or other inhumane treatment. This principle is embodied in the European Convention for the Protection of Human Rights and Fundamental Freedoms; in the Convention against Torture and Other Cruel, Inhuman or Degrading Treatment or Punishment; and in the International Covenant on Civil and Political Rights, all of which the Slovak Republic is a party to, Tichý told The Slovak Spectator.

Mária Kolíková, who represented Labsi, told The Slovak Spectator that the court's ruling is a victory for equal treatment under the law.

She said the Court stressed the need for all the country's courts to not only prosecute human rights violations, but to protect human rights.

"The Supreme Court erred by not looking into whether Labsi could be tortured if extradited," Kolíková said.

Kolíková mentioned a report published last year by the U.N. Commission on Human Rights that raised grave concerns about human rights violations in Algeria, including torture during prosecution, that have not been disproved. These suspicions, the report states, continue to fester, as Algeria has yet to allow a visit from the UN Special Rapporteur on Torture.

"The Commission is concerned about the fact that confessions coerced through torture are not explicitly banned by law and excluded as court evidence," the report states.

Kolíková emphasised that the Constitutional Court's ruling raised an issue of importance for everyone's rights.

"In this case, the principle is that the ban on torture applies to everyone, without exception," Kolíková said.

On the question of Labsi's fate in Slovakia, Kolíková said that Slovak authorities will now have to decide whether to prosecute him.

But she noted that a democratic legal system requires legitimate evidence for prosecution, which is a principle that must be applied in all cases, including against suspected terrorists. Otherwise, innocent people could be wrongly convicted, she said.

"If we tolerate injustice in the legal system, we create a hammer that could fall on every one of us," Kolíková concluded.