Tatra observation deck only for brave

A NEW observation deck was opened at the top of Lomnický štít, the second highest peak in the High Tatras, on June 27, the SITA newswire reported. 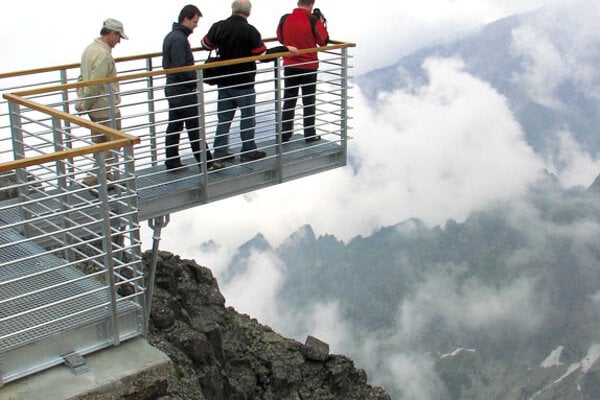 Mind the drop: quite a view from this deck in the Tatras. (Source: SITA)
Font size:A-|A+

A NEW observation deck was opened at the top of Lomnický štít, the second highest peak in the High Tatras, on June 27, the SITA newswire reported.

The deck provides stunning views of the mountains and the Malá Studená Valley, and even extends over the cliffs for a look at the sheer drop below.

The deck is approximately four metres long and a metre wide. According to its designer, Miroslav Mačičák, it is fastened to the cliffs with a special glue that enables it to withstand wind speeds of up to 252 kilometres per hour and bear the weight of several tourists at a time.
“The deck is designed for a much higher number of people than there is space to fit,” Mačičák said.

The observation deck took about three months to build, with components being transported to the peak by helicopter. It cost about Sk600,000.

On the same day as it was opened, the State Forest Company of the Tatras National Park (TANAP) also opened the highest natural botanical garden in Slovakia, at 2,634 metres above sea level.
“These are naturally-grown flowers, not grown in a greenhouse," Zuzana Kyselová, a botanist and researcher for TANAP, said at the garden's opening. “We wanted to show that flowers grow in the highest ranges of the Tatras, and how pretty they truly are.”

Luckily for visitors, many of the flowers at Lomnický štít are currently in bloom. The plants are assigned charts that show their name along with a picture.