JUSTICE Minister Štefan Harabin has been under the spotlight recently, with a parliamentary committee examining whether he abused his authority by appointing an unqualified person associated with the communist-era secret police to the position of executor. Opposition MP Daniel Lipsič, who is a member of the committee and Harabin’s predecessor as justice minister, accused the minister of violating the law by appointing the man and also suggested that Harabin had maintained friendly relations with a person suspected of drug trafficking. 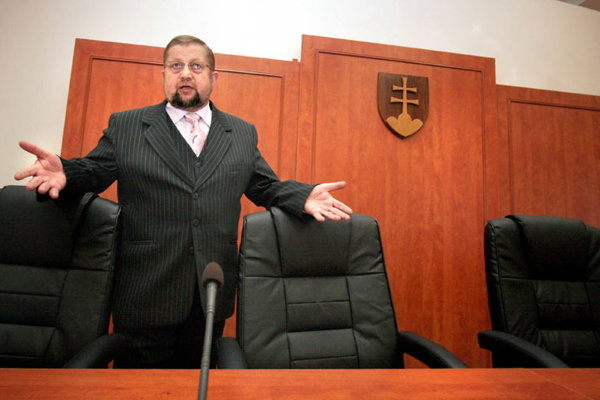 JUSTICE Minister Štefan Harabin has been under the spotlight recently, with a parliamentary committee examining whether he abused his authority by appointing an unqualified person associated with the communist-era secret police to the position of executor. Opposition MP Daniel Lipsič, who is a member of the committee and Harabin’s predecessor as justice minister, accused the minister of violating the law by appointing the man and also suggested that Harabin had maintained friendly relations with a person suspected of drug trafficking.

The deputies of the Constitutional-Legal Committee visited the Ministry of Justice on July 7, specifically to examine whether it was at fault when appointing Ján Ondáš as an executor in October 2006. Ondáš does not have a degree from any law school or university. He graduated from a police academy, the College of the Corps of National Security (ZNB).

Ondáš refused to comment to the media about his nomination. According to the Sme daily, he worked for the ŠtB communist secret police in various positions, finally becoming an ŠtB investigator. Ondáš’ work at for the secret police was said to be first at the 6th department – for intelligence technology – and later at the 2nd department – for the “fight against internal enemies”.

Harabin denied outright that he could have made a mistake.

“The law was not violated,” he said in a statement to The Slovak Spectator.

Lipšic, a member of the opposition Christian Democratic Movement (KDH), is convinced that there has been a violation. He says that the rules are clear and unambiguous: the 2003 amendment to the Act on Execution states that only a person who has graduated from a law school - and nowhere else - can be nominated to the position of executor.

According to Lipšic, this was confirmed by the Constitutional Court, which stated in a ruling that when appointing new executors tighter criteria are justified and allowed. The Constitutional Court also ruled that those executors who were appointed before 2003, i.e. before the amendment, and who had not graduated from a law school, could remain as executors.

“So the current legal arrangement is absolutely clear. And appointing Mr. Ondáš as an executor is quite evidently against the law,” Lipšic stressed to The Slovak Spectator.

The parliamentary examination was carried out by the chairman of the Constitutional-Legal Committee, Mojmír Mamojka, and Jana Laššáková, both MPs for the governing coalition party, Smer, and opposition MPs Lucia Žitňanská, of the Social Democratic and Christian Union (SDKÚ), and Lipšic.

Members of the Constitutional-Legal Committee have yet to issue a report or statement, despite having conducted their examination at the Justice Ministry. A vote to determine their position was postponed until the next meeting of the committee. Mamojka told journalists after the examination that there are “some questions of interpretation, which can be perceived arguable to some extent”.

But Mamojka admitted that “doubts have remained,” Sme reported on July 10.

He had told the public TV channel on July 3, in reference to Ondáš’s nomination as executor: “My opinion is that it probably contradicts the law.”

A member of the Constitutional-Legal Committee, Katarína Tóthová of the governing coalition party said the Movement for a Democratic Slovakia (HZDS), the problems stems from the 2003 amendment. “It is not formulated so unambiguously that I could not possibly look for other alternatives as well,” Tóthová told journalists on July 9, according to the SITA newswire.
According to Harabin, Lipšic did not tell the truth before the Constitutional-Legal Committee, or to journalists. “He again proved to be a liar, which does not surprise me. These are just media dramatisations.”

But Jozef Vozár, a constitutional lawyer at the Institute of State and Law of the Slovak Academy of Sciences, is of the same opinion as Lipšic. “It is a very non-standard, unhappy, or even anti-legal decision,” he told the public service Slovak Radio (SRo), on June 26.

Vozár further opined that as Ondáš was appointed in contradiction to Slovak law, it would be possible to attack his previous decisions. “His activity could be considered invalid,” Vozár continued.

Lipšic repeated for The Slovak Spectator that Harabin might have overstepped the authority of a public official.

“If the authority was executed deliberately in conflict with the law, and someone gained a profit from that; then there is a suspicion that an abuse of authority by a public official was committed,” Lipšic said.

During the next meeting of the parliamentary committee, its members will discuss this possibility. If they come to the conclusion that Harabin should bear criminal responsibility in connection with the decision, they would file a motion at the Prosecutor’s Office.

If they fail to agree on that, Lišpic intends to file his own motion at the Prosecutor’s Office.

“I consider it absolutely scandalous that ŠtB members are deliberately appointed as court executors,” Lipšic said.

“Mr. Lipšic does nothing more than lie and foist false information on journalists,” Harabin said in a statement to The Slovak Spectator.

According to Lipšic, the political aspect of the whole case is also important. He would not rule out the possibility that opposition MPs might initiate a no-confidence vote against Harabin.

p>Lipšic recently stated in parliament that Harabin was on friendly terms with Baki Sadiki, who currently lives in Slovakia and is suspected by Swiss police of drug trafficking. According to Swiss police, he allegedly smuggled drugs from Turkey through Slovakia to Switzerland. The prosecution case against him was launched in the mid 1990’s. In Slovakia, Sadiki faced charge of unauthorised possession of armaments and economic crimes, and was sentenced to several months in prison.

Sme has published a transcription of a 1994 telephone conversation between Sadiki and Harabin, who was then a justice of the Supreme Court. The phone call was used by the Prosecutor’s Office as evidence that Harabin should not rule in the Sadiki case, since the two were friends. The request for excluding Harabin from the case was signed by the-then head of the criminal department of the General Prosecutor’s Office, Peter Filip.

The phone call suggested the two had informal ties. In it, Sadiki asks Harabin how his son is doing; Harabin asks whether Sadiki is already home and whether they arrived all right.
The investigation of Sadiki for drug trafficking is still open, according to the weekly Plus Sedem Dní.

Lipšic concluded his parliamentary speech with the words “Mr. Minister, not only is this government, but you personally are mafia-friendly!"

The government has reacted angrily to the claims about Harabin. A spokesperson for the Prime Minister said that statements from several officials involved in the exclusion of Harabin from the Sadiki ruling, including Peter Filip, showed that "the attack by the Sme daily on the justice minister is based on false information."

The government's statement did not address allegations about Harabin's relationship with the suspected drug trafficker.