SINCE it was established in Cedar Rapids, Iowa, in 1974, the National Czech and Slovak Museum and Library has grown in leaps and bounds. As recently as this spring it had on display four alternative proposals for buildings that would have more than tripled the size of the facility to 60,000 square feet (5,600 square metres). The final concept design was to be have been revealed, June 17. 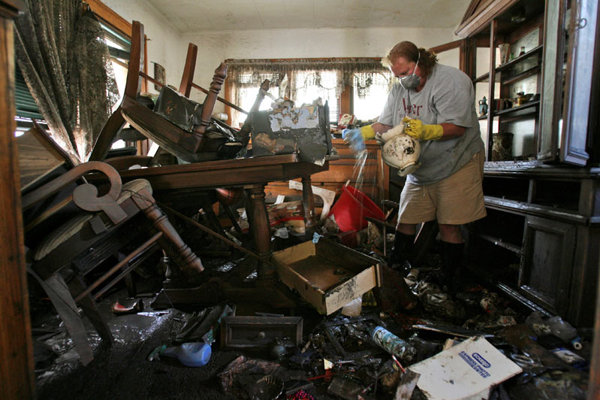 SINCE it was established in Cedar Rapids, Iowa, in 1974, the National Czech and Slovak Museum and Library has grown in leaps and bounds. As recently as this spring it had on display four alternative proposals for buildings that would have more than tripled the size of the facility to 60,000 square feet (5,600 square metres). The final concept design was to be have been revealed, June 17.

But then, after severe rainstorms on June 13, came the flood, which experts have described as a “once in 500 years” event.

The museum and library were inundated: water levels inside the buildings rose seven feet (2.13m) above the floor; the waters lapped even higher against the outside walls.

Instead of planning for the future, staff and friends are now focused on rescuing the present. They have removed artefacts from the upper levels of the building, which weren’t reached by the floodwaters. They’ve also removed flood-damaged items from the building and begun trying to restore them. Many of the library’s books were dumped straight into boxes and sent to Chicago, where they will be freeze-dried to remove all dampness. Inevitably, some books will be beyond saving; efforts will be made to replace them.

Two exhibits were destroyed, including one that commemorated the events of 1968 in Czechoslovakia.

Cleaning operations were set up outside the building, and the Chicago Conservation Center has provided expert help in rescuing textiles and linens. But it will take at least several months to assess the total damage.

“People have been working so hard,” explained Gail Naughton, the institution’s president and CEO. “You can’t imagine working in the sludge and smell - and now the dust as things dry out. It’s amazing what people will do in a crisis.”

While the damage will run into millions of dollars, it could have been worse. Museum staff knew a flood was coming and were able to remove two trucks full of material ahead of the flood.

Librarian David Muhlena was on holiday in Michigan when he got word of the impending flood.

“We had a disaster plan in place and we followed that,” he said. “But we were expecting inches, not feet.” The Cedar River rose nine feet (2.74m) higher than its highest previous recorded level, with the water peaking at 31 feet (9.45m) above the normal level of the river.

Both the Slovak and Czech governments expressed sorrow at the losses and promised to help.
“It is our joint monument,” said Ján Kubiš, the Slovak foreign minister. “It is part of our history and that is why we want to contribute to its reconstruction.”

The Slovak Spectator asked Deputy Prime Minister Dušan Čaplovič, who is responsible for arranging the aid, how much the Slovak government will provide.

"Firstly the Finance Ministry must submit its proposal for allocation of funds from the Slovak cabinet's reserve," Čaplovič said. "We will provide financial aid, but for now I am not able to specify the amount."

The Czech consul general in Chicago, Marek Skolil, visited the damaged area and sent back a report to the Czech Embassy in Washington and to the foreign ministry in Prague. Czech prime minister Mirek Topolánek expressed his concern.

“I was alarmed by the news that the collections and materials, which have been contributing to the maintenance of Czech and Slovak heritage in the United States in such a tremendous way, are in danger,” he said.

The origins of the museum and library date back to 1974, with the creation of three inter-related Czech organizations. Five years later, the Czech Fine Arts Foundation rented a modest house at the edge of Cedar Rapids’ Czech Village neighbourhood and opened a museum. Within three years the museum had moved into a larger building. But even that proved insufficient.

At the same time as the museum’s board approved the idea of building a new structure, the museum’s base expanded. Board members suggested to US Senator Charles Grassley that the new museum be designated the National Czech and Slovak Museum, reflecting the considerable shared history of the two peoples.

On July 2, 1992, Grassley announced the national status of the museum in the “Congressional Record”. Four days later the museum was officially given its present name. Construction on the new building began the following year.

Some 7,000 people attended the dedication of the present building in 1995. Among the honoured guests and speakers were the presidents of the United States, Slovakia and the Czech Republic.

“The United States supports your personal strong commitment to openness and reform as Slovakia takes its place within the family of democratic nations,” US President Bill Clinton told Slovak President Michal Kováč on dedication day.

“The National Czech and Slovak Museum has embraced positive examples from the past,” Kováč responded. In that regard he mentioned Štefan Osuský, an interwar Slovak diplomat, as a person who exemplified high-minded Slovak-US relations.

The library holds about 30,000 Slovak and Slovak-related items in its library, said Muhlena. Two-thirds of the items are stored off-site and suffered no flood damage. Material relating to fine arts and folklore was given priority for removal from the museum building as the flood approached.

Some 40 percent of the museum’s artefacts are Slovak, said Stefanie Kohn, the museum’s curator. This percentage has risen substantially in recent years, thanks to some major donations. The museum holds the largest collection of national costumes (kroje) outside Slovakia and the Czech Republic. Its oldest pieces date from the 16th century.

The museum has received good publicity from newspapers in US cities with substantial Slovak and Czech ancestry, including Pittsburgh, Cleveland, Chicago and Omaha.

Expansion plans are now on hold, but the institution is optimistic about the future.

“We want to assure Czechs and Slovaks that this museum will survive,” Naughton said.

Jan Stoffer, Director of Operations and Education has been tasked with drawing up an operations plan. “There are a lot of options and possibilities on the table,” she said.

One of the biggest questions, whether to rebuild on the present site, is only partially down to the museum to decide. Already, three buildings visible from the museum have been marked for demolition because of flood damage.

But the enthusiasm and optimism of the museum’s staff are palpable.

“It’s kind of fun here,” said Stoffer: “You see history in the making.” She was already talking about collecting raw data on the experience of the flood in the Czech Village neighbourhood that surrounds the museum. “Maybe that will be our first exhibition,” she said.

Many of this year’s scheduled events have been cancelled, but one still on the calendar is BrewNost!, on September 26, an annual fundraiser that features top international beer and wine with food from Iowa chefs.

“We might subtitle it ‘Come Hell or High Water’,” quipped one member of the museum staff.