SLOVAK filmmaker Juraj Jakubisko struck the right balance of publicity and anticipation leading up to the premiere of his newest film, Bathory, which debuted to a packed audience at the 43rd Karlovy Vary International Film Festival on July 5. 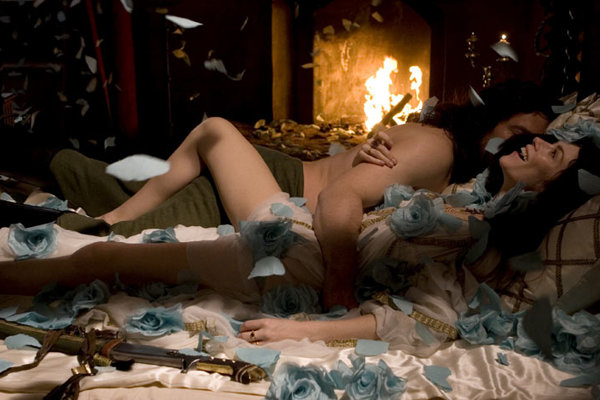 SLOVAK filmmaker Juraj Jakubisko struck the right balance of publicity and anticipation leading up to the premiere of his newest film, Bathory, which debuted to a packed audience at the 43rd Karlovy Vary International Film Festival on July 5.

The screening hall at the Thermal Hotel, which is the focal point of the festival every year, seats more than 1,100, yet tickets for the film about the famous Blood Countess of Csejthe (Čachtice) sold out within a couple of hours.

The audience reaction to the film ranged from ecstatic to sceptical, especially when it came to the director’s interpretation of Bathory’s life and downfall.

According to legend, as well as several bestsellers, the 16th century Hungarian noblewoman became so obsessed with attaining eternal youth, she slaughtered more than 600 young girls to bathe in their blood. But in the film, Jakubisko looks behind the myths and suggests she was actually a victim of a smear campaign rooted in political and ethnic strife.

At a cost of almost Sk400 million, Bathory, which was co-produced by Slovakia, the Czech Republic, Hungary and the United Kingdom, is the most expensive film in Slovak and Czech filmmaking history.

“It has been very interesting to see how such a large project has been publicised,” said Peter Dubecký, general director of the Slovak Film Institute. “Credit is due to Deana Jakubisková-Horváthová, [the film’s producer, an actress and Jakubisko’s wife], who showed admirable skills in finding sufficient financial support and advertising space for the film. Bathory has had by far the most publicity in comparison to other recent Slovak and Czech movies.”

Dubecký said the challenge for Bathory now is to prove that all the money invested in it was well spent.

“Of course, every expensive project raises the question of whether the end result makes up for all the work and finances involved,” he told The Slovak Spectator. “Furthermore, Slovak viewers can ask themselves if costly movies like Bathory should continue to be made, considering Sk400 million is enough for 40 films.”

Dubecký said his impression of the film was rather positive, though he spotted weaknesses.
“The movie is visually stunning,” he stated. “It has the power to literally press filmgoers down into their seats and amaze. Some shortcomings, however, can be seen in the script, mainly as far as the characters’ actions and relationships are concerned. This may cause not everybody to accept it with open arms.”

Shortly after the premiere, a discussion with Jakubisko was held to satisfy the audience’s curiosity. Most of the questions touched on the director’s decision not to follow widespread interpretations of the Blood Countess legend.

“Have you tried bathing in blood? You could not, because it clots,” he said, adding that his aim was not so much to present the “truth” about Bathory as to encourage people to learn about their country’s history.

“My aim is to provoke interest by Slovaks and foreigners in the history of Slovakia,” Jakubisko said. “Furthermore, I want to promote the country through movies, because they are the best ambassadors. After a test screening in London, for instance, one of the viewers came to see me and said, ‘Mr. Jakubisko. I like imagination, but this was too much.’ I asked him what he considered so incredible in the story and he answered, ‘Why, only we English and French have had kings.’ As you can see, without sufficient publicity, foreigners will hardly know anything about our homeland.”

Although the director, in his own words, had seen the movie dozens of times, he attended the screening in Karlovy Vary to observe the audience’s reaction. As well as their applause, he appreciated the numerous congratulatory text messages he received.

“Nothing pleases an artist more than sincere expressions of emotion after seeing their movie,” he told The Slovak Spectator. “Some friends even texted me that their hands were still shaking from excitement when writing the message and thanked me for such a beautiful experience. One cannot help but be moved by such sentiment.”