IT’S AN OLD love that Slovaks feel for their High Tatras mountains, one that is bound up with the nation’s highland peasant roots, and that is renewed every year in the summer months by hikers beneath the dramatic alpine peaks. 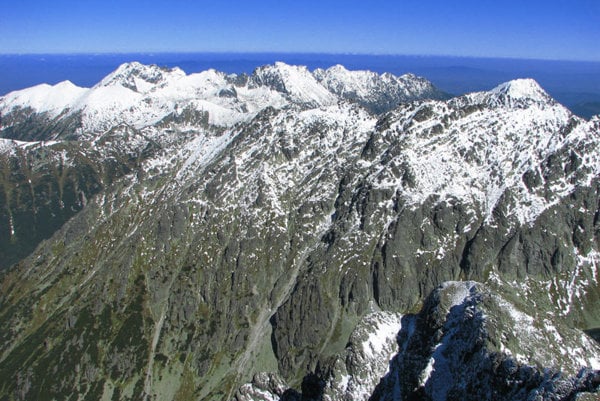 The peaks of the High Tatras: how much longer will they be cheap and cheerful? (Source: SITA)
Font size:A-|A+

IT’S AN OLD love that Slovaks feel for their High Tatras mountains, one that is bound up with the nation’s highland peasant roots, and that is renewed every year in the summer months by hikers beneath the dramatic alpine peaks.

It’s also a protective love. Part of the tiny 40-kilometre mountain chain lies in Poland, while the seigneurial Czechs, after 70 years in the failed marriage of Czechoslovakia, still regard the Tatras as a shared asset. But in Slovakia, where the mountains inspired the national anthem and adorn the currency, the locals call them “Naše Tatry”: Our Tatras.

Which explains the anguish Slovaks felt when a November 2004 windstorm felled about one-third of the forests girdling the mountains, turning shady resorts into treeless wastelands.

“I cried when I took my first look at this place after the windstorm,” said Božena Fábryová, manager of the Grandhotel Praha in Tatranská Lomnica, a tourist spot that took the worst of the squall. “It was as if the place had just been bombed. It was terrible, just unimaginable.”
In leveling 13,000 hectares of forest, the storm also exposed the neglected state of most hotels and pensions in the mountains.

After four decades of Communism, the dilapidated tourist infrastructure was privatised to government friends and supporters, such as members of the Lexa and Rezeš families, who were more interested in squeezing money out of their assets than in developing them.

After the trauma of the storm wore off, it became clear that only clever marketing and a major infusion of capital could save tourism in the High Tatras.

The arrival of J&T, a Bratislava-based capital group, provided both. J&T is investing €250 million in ski facilities, a cable car to one of the highest peaks, and four hotels, among them the century-old Grandhotel Praha.

Three of the hotels will be five-star facilities, including the Grand Hotel Kempinski, due to open in fall 2008. Konstantin Zeuke, the director of Kempinski Slovakia, said he was confident the mountains could attract more affluent visitors.

“The High Tatras is a unique mountain region in Europe, very well known by Germans, Russians, and all the neighbouring countries of Slovakia,” he said. “This is still a pioneer project for us, but I'm confident that Kempinski guests and others will start travelling for leisure or meetings to the High Tatras in the summer as well as in the winter.”

J&T founder and partner Patrik Tkáč said that the accessibility of the mountains (the Poprad-Tatry airport, a 20-minute drive away, has a regular service from London Luton airport) and their relatively manageable size were strong selling points.

“I’ve travelled the world and skied a lot, and here everything is concentrated, you can see from one end of the mountains to the other,” he said. “We will only make money if our plan is successful, and that is to turn the Tatras into a jewel.”

Such references tend to raise hackles among Slovaks, for whom the Tatras have always been a low-cost, mass destination, albeit one with poor services. “I’m a bit worried that development will turn the High Tatras into a place for high society, not for the average person,” said Dagmar Pažická, co-owner of the Pažický Penzion in the Tatras resort of Nová Lesná, which charges 15 euros a night for a room. “Everyone talks about the need for development, but often this is just a smokescreen hiding the fact that the developers are thinking about their own profits, not about Slovakia.”

But as the hotels are rebuilt and new growth shrouds the scars from the storm, the developers are winning support for their strategy of targeting the affluent and selling the Tatras as a niche destination. After all, it’s not as if the country’s overall tourism strategy was working miracles – Bratislava hotel occupancy, at around 57 percent, is six percentage points below the EU average, while last year the number of nights foreign visitors spent in paid accommodation in the country declined.

“The Tatras used to be a sleepy place where people were spoiled and incompetent, and where a lot of people only owned hotels because they were given them,” said Gabriel Beer, an editor with the Trend business weekly. “A lot of people might not agree with me, but I think J&T are doing positive work in the Tatras.”