SLOVAK filmmakers have achieved a string of successes lately, leading some experts to suggest the country’s dry spell of the past few years may be over. 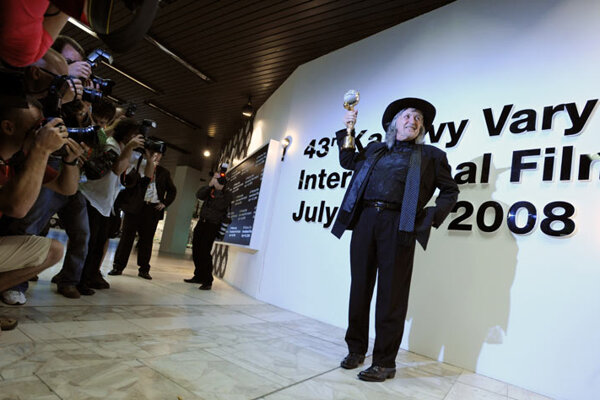 SLOVAK filmmakers have achieved a string of successes lately, leading some experts to suggest the country’s dry spell of the past few years may be over.

Two months ago, Juraj Lehotský’s documentary Blind Loves (Slepé lásky) became the first Slovak entry to be shown at the prestigious Cannes film festival in 37 years. And as many as eight Slovak movies were screened during the 43rd Karlovy Vary International Film Festival at the beginning of July.

The films shown in Karlovy Vary included Juraj Nvota’s Music (Muzika), which was screened in the East of the West section; Lehotský’s Blind Loves, which was selected for the Documentary Films in Competition; and Vlado Fischer’s Half-time (Polčas rozpadu), which was part of the Variety Critics’ Choice section. Roming by Jiří Vejdělek and Little Girl Blue (Tajnosti) by Alice Nellis were shown in the Czech Films 2007-2008 section because they were co-produced with the Czech Republic. And two special sections were created in tribute to the most prominent contemporary Slovak directors, Dušan Hanák and Juraj Jakubisko. The former presented his famous 1970s movies Pictures of the Old World and The Rosy Dreams, while the latter premiered his long-awaited Bathory.

“This was without a doubt Slovak cinema’s strongest representation in Karlovy Vary in the last 10 years,” said Peter Dubecký, general director of the Slovak Film Institute, who attended the festival to promote both existing and upcoming projects. “It is important to emphasise that Karlovy Vary is an A-class festival in the same category as [similar events in] Cannes, Berlin or Toronto. I am extremely pleased with the fact that Slovak movies have started being invited to these festivals, because it is a good omen for the future.”

Dubecký added that these successes were partially due to Slovakia’s increased efforts to publicise its films.

“For the past five years, we have set up a promo corner at the well-known Marché du Film in Cannes together with representatives of the Czech Republic, and at the Berlin film festival, which we shared with Czechs, Hungarians, Poles and Slovenians,” he told The Slovak Spectator. “Karlovy Vary also provided some publicity opportunities - four forthcoming original and co-produced movies were presented there, namely Ivan Vojnár’s Flowers of Sakura, Vladimír Balko’s Soul at Peace, Jiří Chlumský’s Broken Promise, and Marko Škop’s Osadné – Brussels – Osadné.”

Dubecký also believes that the obvious boom in the number of Slovak films is mostly the result of improved opportunities for filmmakers to receive funding.

“The system of financial assistance to filmmakers has substantially changed in Slovakia,” he remarked. “Backing can now be obtained through the AudioVision grant programme and starting in 2010, the support will hopefully be even more generous, thanks to a connection with the Audiovisual Fund.”

Dubecký expressed optimism about the amount of funds that will be available in the future.
“If we want this trend to continue, between Sk170 million and Sk200 million should be invested in filmmaking every year,” he said. “And if the Audiovisual Fund project is put into practice, some Sk400 million is foreseen for new movies.”

Since both Dušan Hanák and Juraj Jakubisko turned 70 this year, the organisers of the Karlovy Vary International Film Festival decided to pay tribute to them by screening their movies and awarding them Crystal Globes for Outstanding Artist Contribution to World Cinema.

Jakubisko said that he considered the award a great honour and added that decades of filmmaking had earned him more creative control over his films, such as Bathory.

“When I first started out,” Jakubisko recalled for The Slovak Spectator, “I was making black and white 8mm movies, then I tried 16mm and 35mm ones, and later I started working with colour motion pictures, which developed from very poor quality to literal perfection, and now I take advantage of digital technology. This prize is closely connected with all that, since it is a reward for the message I have tried to spread through my films - a message that appears on the screen thanks to various filmmaking techniques.”

Hanák also expressed his pleasure with the award, saying it showed a certain consensus of views and attitudes in the region where he had lived and filmed his movies.

“Although I have already been presented with similar awards in Denver or Bergamo, this occasion is very special for me,” he told The Slovak Spectator. “All my works were born in the Czech-Slovak sociocultural context. So such a prize means a loyalty to the artistic ideals of the 1960s, the creative explosion throughout the world that has influenced whole generations of artists to today.”