EASTERN and northern Slovakia were hit by five days of severe floods that started on July 23. 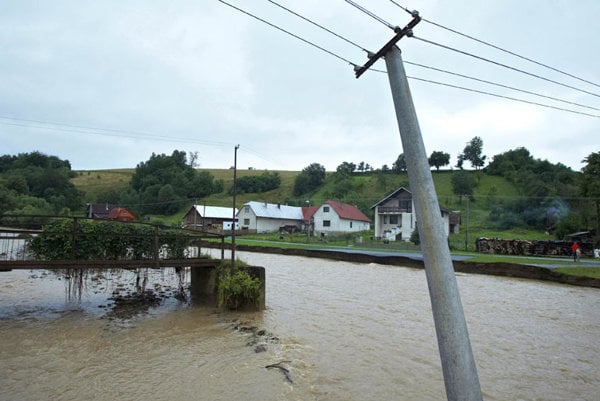 The situation was grave in Lukov, a village in eastern Slovakia. (Source: ČTK)
Font size:A-|A+

EASTERN and northern Slovakia were hit by five days of severe floods that started on July 23.

Torrential rains caused flooding in the Stará Ľubovňa and Bardejov districts, killing two people, leaving dozens of villages without gas and power, and washing away bridges. Near Prešov, the floods almost caused the Sigord Dam to overflow.

The nationwide damage has been estimated at hundreds of millions of crowns, prompting non-governmental organisations, especially the Ekopolis association, to question whether adequate flood control measures were in place.

The fatalities occurred in the village of Čirč, in eastern Slovakia’s Stará Ľubovňa district. A 41-year-old man and his 33-year-old sister were swept away while trying to protect their property from rising flood waters.

In the Bardejov district, 36 villages with between 200 and 500 inhabitants each were left without gas and power. Some of the villages, including Livov, Livovská Huta, and Kríže, were completely inaccessible for days.

Roads and cellars were also flooded in villages around Spišská Nová Ves, Bardejov, and Poprad.

Prešov declared a state of emergency on July 23, when the Sekčov River spilled over it banks and inundated the roads between the villages of Nižná Šebastová and Fintice.

In the Poprad district, the floods caused a mudslide near Ždiar, a village in the foothills of the Tatras.

According to Peter Klein, the head of the Spišská Nová Ves emergency rescue team, flood waters from the Holubnica stream damaged the local zoo and sewage water treatment plant.

The situation has calmed down over the past few days, he told The Slovak Spectator, but he noted that flood alarms are being kept at crisis levels because rescues are still underway in the parts of town called Novoveská Huta and Ferčekovce.

“The riverbed is clogged with debris up to two thirds of its height,” he told the Spectator.

“The inhabitants of the affected areas have been informed of measures aimed at preventing the spread of infectious diseases through contaminated water and food.”

Klein said that flooding occurred because the riverbeds were unable to absorb such extreme, prolonged downfalls.

“We had hoped such a situation would not occur,” he said.

Klein said much of the country is at risk of flooding.

“Because of climate change and the destruction of forest fauna that absorbs rainfall,” he said.
Mária Hankovská, the head of the flood commission in Bardejov, also confirmed that several villages in the Bardejov district were still in a state of emergency.

“Lives are still in danger there,” she said.

Most roads have been cleared and embankments reinforced, she said, but the road between Livov and Livovská Huta was inaccessible until July31.

“Only military vehicles can get through,” Hankovská said on July 30.

She said the floods had caused panic.

“When we first arrived, the villagers acted like they wanted to hang us,” she said. “The emotions were that strong.”

But the mood has calmed, she said. The people have enough drinking water, food, and sanitary items. The damage to the area has not been assessed yet, but Hankovská put it at more than Sk200 million.

“There is devastation – sewers, ducts, houses, roads, bridges,” she told The Slovak Spectator.

The extent of the damage has raised the question of whether adequate flood prevention measures were in place around the country.

Slovak Radio (SRo) reported that the Slovak Water Management Company (SVP) had planned to implement measures worth more than Sk13 billion by 2007, but that only Sk4 billion were put in place.

Peter Višváder, the spokesman of the Environment Ministry, explained to The Slovak Spectator that the shortfall was the fault of the Mikuláš Dzurinda government, which he contended didn’t make anti-flood measures a priority.

“So it didn’t spend the necessary amounts,” Višváder said.

Višváder also said the Fico government has put aside more than a billion crowns for flood prevention since coming to office.

In addition, about Sk700 million will be spent on repairing riverbeds, and about Sk300 million is earmarked for new investment. An additional Sk4 billion (€120 million) has been allocated from EU Structural Funds.

“Big amounts will go to eastern Slovakia,” he said.

László Miklós, who served as Dzurinda’s environment minister, told The Slovak Spectator that the government did not use the finances from the state budget for flood prevention because it did not expect to acquire the necessary resources from the Euro Funds.

But Miklós noted that the Flood Warning and Forecast System was put into place during his term.

He also recommended so-called environment-stabilisation measures, such as planting a green belt of bushes with high absorption across several hundred hectares.

“These are the cheapest and technologically simplest measures,” Miklós told the Spectator.

But he noted that such proposals are difficult to implement because of land ownership issues.

Robert Oružinský, a forester and environment expert, told The Slovak Spectator that preserving and protecting forests would prevent floods in the future.

“Forests don’t completely prevent torrential floods, but they can restrain them and lessen the aftermath,” Oružinský said.

Elena Pätoprstá, an environmental activist with the Ekofórum NGO, accused state authorities of contributing to the risk of floods by overlooking excessive logging in state forests.

She said many experts at the State Environmental Protection Office were fired for opposing logging, leaving not enough human resources to plan adequate flood prevention measures.

“But politicians use the media to point the finger at NGOs,” Pätoprstá said.