The cost of euro adoption: one good meal

ONE OF the world’s leading clubs of industrialised countries recently delivered an optimistic message to those who feared that Slovakia’s switch to the euro might place a major financial burden on the shoulders of the most vulnerable in Slovakia. The impacts of the cash changeover scheduled in 2009 will be manageable for society and its effects are likely to be small in aggregate, though it might lead to significant price increases in a number of sectors, most notably tourism and recreational activities, the Organisation for Economic Cooperation and Development (OECD) said. 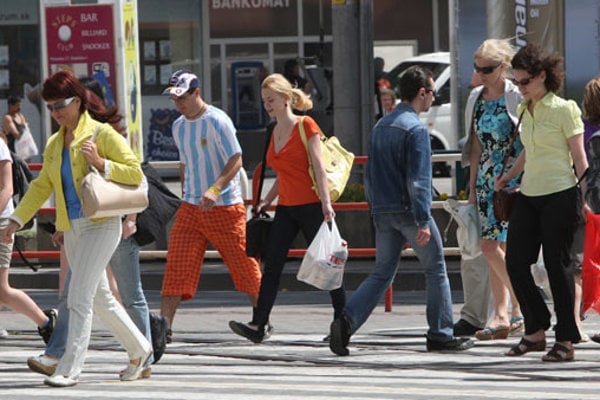 ONE OF the world’s leading clubs of industrialised countries recently delivered an optimistic message to those who feared that Slovakia’s switch to the euro might place a major financial burden on the shoulders of the most vulnerable in Slovakia.
The impacts of the cash changeover scheduled in 2009 will be manageable for society and its effects are likely to be small in aggregate, though it might lead to significant price increases in a number of sectors, most notably tourism and recreational activities, the Organisation for Economic Cooperation and Development (OECD) said.

“Applying the experience of existing euro area member countries to the case of Slovakia, the cash changeover is estimated to increase aggregate consumer prices by 0.32 percent between July 2008 and July 2009,” said the OECD in its study on the impact of euro adoption on inflation and interest rates in Slovakia.

According to the club of 30 mainly wealthy nations, higher income families will carry a heavier burden of the currency changeover while some socially vulnerable groups such as the unemployed and the retired will be less affected. Households with children are, however, likely to incur higher costs due to the changeover.

The OECD estimates that a typical household will incur additional consumption expenditures of Sk504 (€16.7) per year on average as a result of the changeover. Since citizens with higher incomes tend to spend a larger share of their income on recreational activities their additional expenditures are estimated to increase by 0.11 percent more than those of citizens in the lowest quintile, the OECD said.

The findings of the OECD study, which were presented to the media on July 17, have surprised neither state officials nor market watchers. The complete study will be released at a later date.

“Slovakia’s view corresponds with the results of the OECD study and confirms the thesis that the euro does not directly equal price increases,” State Secretary of the Finance Ministry František Palko told media. “The study has shown unambiguously that Slovakia cannot expect an enormous increase in prices due to the euro switch.”

What Palko said was interesting was that the heaviest impact of the euro will be seen more among people aged between 30 and 44 than among the older generation aged over 60.

“The young ones will be confronted with an increase of about Sk710 in annual additional consumption expenditures per household because of the euro’s introduction, while for the older generation it will be about Sk163 annually per household,” Palko told media.

Another finding that Palko pinpointed as intriguing is that the euro changeover will have a heavier impact on the households of the self-employed as opposed to the retired, who should see their annual expenditures grow by Sk151, compared to increased expenses for the self-employed of Sk843 annually.

Citizens of the bigger cities will also carry a heavier burden of the changeover, with about Sk681 in extra expenses annually per household, while rural areas will see additional annual expenditures of about Sk383, Palko said.

The vice-governor of the National Bank of Slovakia, Viliam Ostrožlík, welcomed the findings as good news and added that even those groups which experience a heavier impact from the changeover should be able to handle it pretty well.

The Finance Ministry will, however, be keeping a close eye on the structure of inflation and comparing it with developments in other countries. Palko also said that the government would react immediately to any changes.

“If it turns out that the euro changeover has [a severe] impact on some groups of citizens, the government will take immediate action,” Palko told media.

The government only recently passed a multi-billion-crown package of measures that should ease the impact of the changeover on the most vulnerable groups.

The government has also been leading a crusade against what it calls unjustified price hikes or unfair business practices during the run-up to the changeover. However, business has reacted cautiously to news about the preparation of such measures, arguing that healthy competition is the best regulator.

Andreas Wörgötter, head of OECD’s regional studies division, said that if the government decides to consider compensation for eventual impacts from the changeover, it should be thought through very carefully and should not be done on the principle of “general support for all”, which might have inflationary effects.

The OECD is encouraging Slovakia to continue economic reforms.

“Our message for Slovakia is: do not stop economic reforms,” Wörgötter said. “We have seen in other countries that after the adoption of the euro there is often a certain reform fatigue.”
Wörgötter said the government should continue its work to reduce regional disparities, increase labour mobility and, for example, develop a functioning rental housing market.
The OECD also said that the level of competition for products appears to have played a major role in determining the extent of euro changeover-related price increases in the first-wave euro area countries.

As such, the lighter overall product market regulation in Slovakia compared to other euro area members and the associated higher level of competition should help contain price increases as the euro changeover takes place.

“Although the overall actual price effect of the cash changeover was very small in most euro area countries, inflation perceptions increased notably after the changeover as there was a widespread feeling among the public that the euro had brought about significant price hikes,” the report said.

Whilst such a widening of the perception gap in Slovakia, if it occurs, might contribute to a negative attitude among citizens towards the euro, it is unlikely to have consequences for actual inflation, according to the OECD.

“This is because in most member countries the effect was perceived as temporary by citizens so that inflation expectations remained unaffected or even declined in the aftermath of the changeover,” said the OECD.