ČACHTICE Castle, surrounded by legends, has regained its impressive form from 1700… but only in 1:50 scale, at the Matthew’s Kingdom visitor attraction near the village of Podolie. 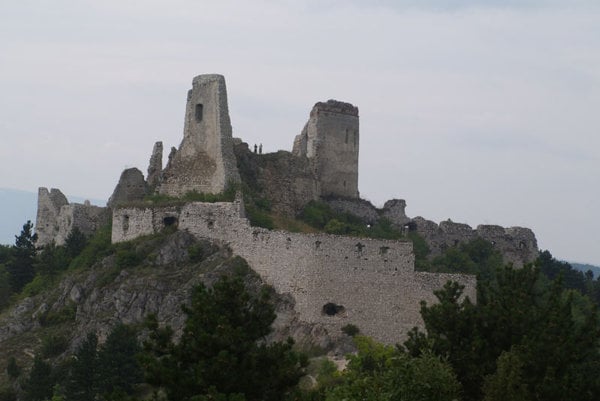 ČACHTICE Castle, surrounded by legends, has regained its impressive form from 1700… but only in 1:50 scale, at the Matthew’s Kingdom visitor attraction near the village of Podolie.

The festive opening of the residence of the “Bloody Countess” Alžbeta Báthory took place in late July at the attraction, which is filled with scale models of castles and mansions, once owned by the “Lord of the River Váh and the Tatra mountains”, Matúš Čák Trenčiansky. The timing was not accidental: it coincided with the long-awaited premiere of Slovak director Juraj Jakubisko’s film Bathory, which took place in early July.

In the village of Čachtice, people are pleased about the effect the film is having, with crowds of tourists beginning to visit the ruins of the castle.

“The growth of tourism can be felt; the visitors ask about the castle, the film, and the circumstances surrounding Alžbeta Báthory,” a waitress in a Čachtice restaurant near the lane to the castle told the SITA newswire.

A delay in the film’s premiere gave modellers the idea of re-creating the castle.
“When we learned last year that the premiere had been postponed, we told ourselves we could complete it in time,” said Juraj Hladký, from Matthew’s Kingdom. Hladký, who comes from nearby Nové Mesto nad Váhom, says he grew to love this castle the most. “The work on this model lasted for eight months, excluding the time spent on research. The costs amounted to about Sk100,000

The history fan, aged 49, says that the actual castle’s remains were disappearing right before his eyes.

“We have a project worth almost Sk100 million, aimed at preserving what remains of the castle; we intend to get the resources from Eurofunds,” said Anna Ištoková, the mayor of Čachtice, adding that thanks to the film by Juraj Jakubisko the village has recorded a huge increase in tourists. “Both the legend about the castle and village of Čachtice have become known to a wider group of people,” Ištoková said.

Many people from the neighbouring Czech Republic came to see the castle on a recent Saturday afternoon.

“I heard something about Čachtice. I was curious about the castle, certainly in part thanks to the film about Countess Báthory,” Tereza Budzowská from Ostrava said, who came to Čachtice with a bunch of bikers.