Who will confront the skyward urge?

BRATISLAVA is the eighth fastest-developing city in Europe, astonishing those who decades ago were sceptical of its potential. The Slovak Spectator spoke to Štefan Šlachta, the capital’s chief architect, about its phenomenal success, as well as its many growing pains. 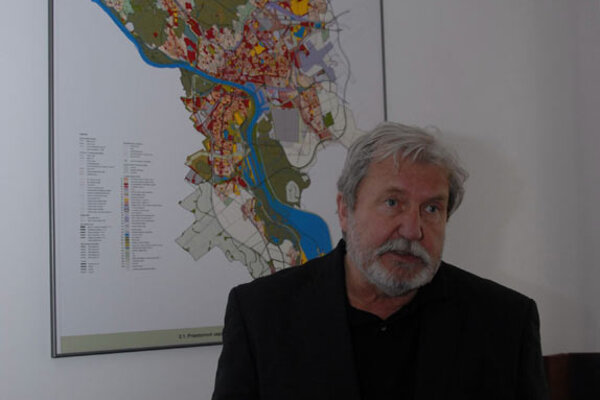 BRATISLAVA is the eighth fastest-developing city in Europe, astonishing those who decades ago were sceptical of its potential. The Slovak Spectator spoke to Štefan Šlachta, the capital’s chief architect, about its phenomenal success, as well as its many growing pains.

Šlachta has been criticised for supporting the development of Bratislava Castle hill on the left bank of the Danube, known as Vydrica. But that has not shaken his belief that every era has the right to present its contemporary architecture, and that one cannot return to the past.

The Slovak Spectator (TSS): When the Czech capital Prague is mentioned, everybody thinks of towers. Each city has its own skyline. But Bratislava seems to have no skyline.
Štefan Šlachta (ŠŠ): I do not agree. Like Prague, Bratislava has its historical skyline. Of course, it is a sin to interfere in the historical panorama, as happened with the construction of the Aupark Tower in Petržalka. This is inexcusable. The Bratislava district of Petržalka decided that the panorama of Bratislava would be destroyed, and not that of Petržalka. In fact, even the view from the tower is terrible.

TSS: How can such a thing be prevented?
ŠŠ: Cities like Hamburg, Jerusalem, and London have small models, like a puzzle, where you can put in and take out buildings. On such a model, new projects can be evaluated from the spatial point of view. For example, we raised the alarm about the Aupark Tower when it was first planned, that it would stick out. Nobody wanted to believe us. But the fact is that when you walk down the historical city centre now, the tower looms over the Old Town like a monster.

TSS: Sometimes it seems that Bratislava has no concept for zoning high-rises.
ŠŠ: The city is considering locations where towers can be concentrated. Unfortunately, this happened quite late, after some of them had already been built. In the era between the two World Wars, Bratislava rose from one-storey to five- or six-storeys. Today, a lot of these buildings are being built.

TSS: Where will future high-rises be?
ŠŠ: The chaotic construction of high-rises started during socialism, unfortunately. I am thinking especially of the Hotel Kyjev at Kamenné Square and the Civil Engineering School [part of the Slovak University of Technology]. The National Bank of Slovakia is the only new high-rise situated in the centre of the city. Then there are small local centres like Polus in Nové Mesto, or Patrónka, where some high–rises have already been constructed. The human desire for tall buildings, be it a demonstration of some technological prowess or a symbol of economic power, has been there since the Tower of Babel. We get emotional now about towers 150 metres high, but Gothic cathedrals were the same.

TSS: Let’s talk about the National Bank, with 33 storeys, which opened in 2002. It got a lot of criticism, too.
ŠŠ: I was on the jury when the National Bank was proposed. There were 28 projects. It had to be a slim building because nothing else would have matched the nearby Slovak Radio building, which is in the shape of an upside-down pyramid.

TSS: Do you think that such high-rise buildings are safe?
ŠŠ: Well, this is questionable. For example, let us think what would happen in a fire. The firemen unambiguously said they could save people only up to the 17th storey, so what about the higher storeys?

TSS: What about preserving monuments in Bratislava?
ŠŠ: The situation with monuments is that many things were destroyed during communism, and they have been lost forever. Today, I rather think that people should be educated and enlightened, and we should fight for people to understand that values cannot be expressed in terms of money. Monuments are crucial for the identity of a town or locality, and if people think innovatively, there can always be a way to use them properly. It requires, of course, that developers agree not to hunt for maximal area in square metres at any cost.

TSS: The demolition of the building of the former Kablo factory, where cables were produced, caused a storm of criticism. The history of the Kablo Bratislava company dates back to 1895.
ŠŠ: Káblovka, the Kablo factory, was not acknowledged as a historical monument, unfortunately. In this case the preservation authorities – but I have to say we all – hesitated too long, and failed, as it should have long been recorded as a monument. In other parts of the world, old industrial areas, such as Manchester, stopped functioning and stood empty for a longer time, until they decided how to use them. Here, this problem arose overnight.

Factories stopped operating and the next day, someone wished to build something on their site. We do not have the distance to become aware of the value of these buildings. It all came too suddenly, too quickly, and developers outpaced us in a way. Káblovka is valuable because it serves as a certain kind of example, and maybe as a result we will be more cautious in the future.

TSS: What about the planned construction of the district of Vydrica in the Old Town under the Castle? The public tender was won by an Italian project with a modern architecture, which caused a wave of criticism. Has the final decision been taken?
ŠŠ: No, the project is still under discussion. Historical topography was taken into account. Something remains from the ruins. Signs with names of streets have been preserved, various stones, even some portals. That all can be put into the new architecture. The Italians who won, who come from Rome (Roberto Grio, Guendalina Salimei, Francesca Contuzzi and Elio Ravá), really minutely studied Vydrica. It is interesting that as early as 1994, they produced a tender concerning Vydrica, but at that time, their project was not realised.

Ladislav Rehák finances the construction projects very transparently and correctly, I would say. And yet the media keep stamping on his head. On the other hand, another part of the Old Town, Cukermandel, which is close to Vydrica, is being designed and developed by J&T. Nobody knows anything about their project, nobody has seen it. I have not seen any plan of theirs. I would like to know why journalists are not interested in this.

TSS: Turning to Kamenné Square and the Hotel Kyjev. This is the very centre of Bratislava. You are involved in the demolition of the Kyjev, for which the media have not praised you.
ŠŠ: I have always said that something must be done with Kamenné Square. It has lost its position as the temple of consumption and it needs to be re-made into something that the city needs, that would function 24 hours a day, and fulfil the needs of people. Now I am talking about the square. But where is the square? In its centre, there is the parking lot and there are many kiosks. Sure, this could be changed, but the time has passed. I think, of course, that the Kyjev Hotel and the adjacent building of Tesco, the former Prior department store, is of good architecture.

If it is replaced by something new, it must be twice as good. And a part of the complex can eventually be included in the new solution.
Petra Šrámková contributed to this interview.