IT’S usual to sightsee, learn new facts about historical sites, and meet foreigners while abroad, but some residents of Košice have been doing it without leaving home.They take part in the “Wanders in Košice,” monthly guided tours involving locals and some English-speaking foreigners that the City Information Centre (MIC) has been organising since 2004. 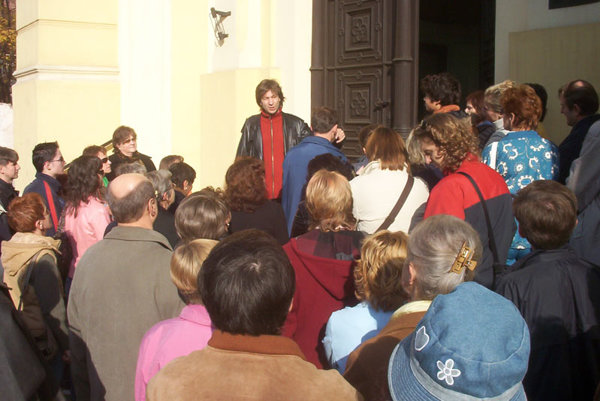 IT’S usual to sightsee, learn new facts about historical sites, and meet foreigners while abroad, but some residents of Košice have been doing it without leaving home.They take part in the “Wanders in Košice,” monthly guided tours involving locals and some English-speaking foreigners that the City Information Centre (MIC) has been organising since 2004.

“The tours have enabled those interested in the history of their town to gradually discover the secrets of places they thought they knew,” said Ladislav Korán, director of the MIC. “Much to our pleasure, some people become so intrigued by something they’ve learned, they begin attending history lectures or reading literature, and then return to share their new knowledge.”

The tours now attract around 300 people. Everyone meets the first weekend each month, divides into twelve groups, and designs a tour based on a certain topic. Previous tour subjects focused on the city’s cinemas, its socialist history, and its bells. The tours on the history of its Jewish community and the St. Elisabeth Cathedral have been repeated several times due to popular demand.

According to Korán, the tours are popular because of how the town’s history and legends are presented.

“The guides are amusing and engaging, so the information’s not hard to digest,” he told The Slovak Spectator. “They don’t burden the audience with unnecessary and tedious details.”

The MIC estimates that locals make up 90 percent of the sightseers, but foreigners have begun participating as well.

They’ve started attending English-language tours led by Milan Kolcun, who co-founded the excursions and is one of three guides. Kolcun recently published “Wanders in Košice” (Potulky mestom Košice), an English translation of his popular book.

As stated whimsically on the cover, the book is aimed at “(genuine) tourists, (rational) local patriots and (future) guides in Košice, as well as those who would like to know as much as they do.”

“It is more beautiful and optimistic to look up rather than down while you walk through the city; then you won’t miss the architecture - that astonishing art that adds soul to the space that most closely surrounds us,” Kolcun writes in the book’s introduction.

Kolcun told The Slovak Spectator that Košice is an ideal city for guided tours because of its “sightseer-friendly” distances.

“Within 60 minutes, one can easily walk across the whole centre of Košice,” he said. “Furthermore, there are plenty of monuments and places to visit. This is shown by the fact that we have done almost 50 tours so far and there are still enough topics for the next two years.”

That is why Kolcun often calls Košice a “city of human dimensions”.

“It is neither too big, nor too small, and this actually applies to all of Slovakia,” he observed. “Our cultural heritage is comparable with other countries. The only difference is that we didn’t have a Homer who ensured us a lifetime of publicity.”

The next tour takes place on September 6 and 7, during the Festival of Central European Theatres. It will visit the State Theatre in Košice, which has been called the most beautiful theatre in the country. At more than 100 years old, its chandelier represented Slovakia at the World Exhibition in Paris in 1889.

At the first weekend in October, the tours will visit the places influenced by the likes of Raphael, Titian, Andy Warhol, Koloman Sokol, Július Jakoby and dozens of other artists.