Labour Minister back under spotlight

LESS than a month after the environment minister was sacked due to allegations of cronyism, another minister in the Robert Fico government has been suspected of favouring candidates friendly to her party Smer when approving hefty subsidies for social projects. 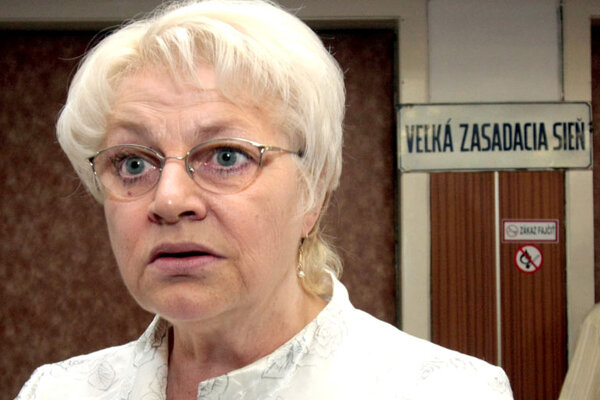 LESS than a month after the environment minister was sacked due to allegations of cronyism, another minister in the Robert Fico government has been suspected of favouring candidates friendly to her party Smer when approving hefty subsidies for social projects.

The Labour Ministry has approved subsidies worth Sk400 million (€13 million) to four non-profit organisations backed by Juraj Thomka, a friend of Smer’s Jana Laššáková, the tabloid daily Plus 1 Deň reported in early August. The subsidies are being granted as part of a pilot project to support ‘social companies’, firms that receive state support in return for hiring socially vulnerable employees.

The prime minister has stood firmly behind Labour Minister Viera Tomanová, whom the largest opposition party, the Slovak Democratic and Christian Union (SDKÚ), wants to have dismissed. The Movement for a Democratic Slovakia (HZDS), a junior member of the ruling coalition, wants to take a closer look at the ministry’s operations while the Slovak National Party (SNS), the third member of the ruling coalition, has so far kept quiet on the issue.

Tomanová brushed off the cronyism allegations and said that the eight non-profit organisations were selected from a pool of 12 applicants based exclusively on professional criteria. She also denied the parallels between her and the ex-environment minister that were drawn by the media and the opposition.

Tomanová said that comparing her case to that of ex-Environment Minister Jaroslav Izák is like “comparing the weather conditions in Africa and Antarctica”.

Izák’s ministry came under fire for approving subsidies to political contacts and supporters. One subsidy, for Sk200,000 (€6,640), went to the mother-in-law of the head of the ministry’s Environment Office.

After the story broke in the media, Prime Minister Robert Fico called on the SNS, which nominated Izák to his post, to withdraw him. Izák was the fourth minister to have left the cabinet since the current election term began in 2006.

Fico told the media on August 13 that he trusts his minister Tomanová and he is satisfied with the explanation she has given him.

“Do you think I have a problem dismissing a cabinet minister?” Fico said to the media. “Of course I don’t.”

The prime minister said that if he subscribed to the media’s theories, he would have to exclude 70 percent of all those applying for subsidies because they are all supporters of one of the ruling coalition parties, the SITA newswire wrote.

Smer’s Laššáková also denied the media reports and said that she would defend her name in court. Businessman Juraj Thomka, who stands behind the social company projects, at times has had dealings with Laššáková through a company called Prevody a Agregáty, reported the Sme daily.
Laššáková’s son Vladimír Laššák, who works in the Regional Development Department of the Banská Bystrica Regional Administration Office, endorsed the applications submitted by Thomka’s four non-profit organisations with a letter to the Labour Ministry.

However, Tomanová said that the letter only says that all seven projects are in line with the economic development of the Banská Bystrica Region. She showed the letter to media at a press conference and added that it was addressed to an employee of the ministry and not directly to her.

“I care about the quality of the projects,” said Tomanová, and defended her ministry’s actions by adding that if all 12 of the submitted projects had met the criteria, all of them would have won state support.

“How am I supposed to know and identify everybody’s friends, family and relatives,” said Tomanová. “Besides, it is not me who is doing it, but people at the ministry.”

However, political-ethics watchdog the Fair Play Alliance said that state officials should not brush these suspicions aside so lightly.

However, what they possibly could have done, Wienk said, is use their contacts to access important information and thus gain an advantage when compared to other candidates.

The media, however, has questioned whether the organisations that won the subsidies really met the criteria better than those that were refused.

The TA3 news television channel, for example, reported that a non-profit organisation from Bôrka also requested Sk15 million (€498,000) from the nearly €600 million worth of euro-funds intended to cure long-term unemployment. The organisation, which has been operating since 2001, wanted to set up a company that would employ Roma. TA3 also noted that the four non-profit organisations that were granted subsidies were established only shortly before the launch of the social company project.

Meanwhile, HZDS MP Jozef Halecký, the head of the Parliamentary Social Committee, said he would initiate an audit of the Labour Ministry, because Sk400 million is too large a sum to overlook. MP Ján Kovarčík, also a member of the HZDS, said that his party could not be happy with what is happening at the ministry, Sme reported.

The SNS has commented little on Tomanová’s case and has been preoccupied with choosing a new nominee for environment minister.

The SDKÚ has already called on Fico to sack Tomanová. The Labour Ministry’s response was to accuse the SDKÚ of denying the equal rights of citizens to participate in state projects regardless of their political affiliations.

In November 2007, the Slovak government announced it would subsidise companies that employ a higher number of socially vulnerable people, including the young jobless, people over 50, single parents and those caring for three or more children.

One of the criteria that companies must meet to win a subsidy is that, with 28 months of state support, the social company’s project must operate for at least five years. If the project is not sustainable for five years, the company has to return the money, said Tomanová.

However, despite all explanations, the seeds of suspicion have been sown, Wienk said.
“This case gives the signal that, as part of a single call for projects, people who are close to Smer can draw huge amounts of money and gain advantages, mainly information through their contacts,” Wienk told The Slovak Spectator.

For Wienk, the case has both ethical and political dimensions, and she said that people involved in it should be made responsible on both levels.

“The players should be made responsible for not warning about the possibility of conflicts of interests and also for not having created rules strict enough to prevent such conflicts,” Wienk said.

Tomanová has faced suspicions of cronyism in the past and has already survived one no-confidence vote in parliament.

The organisation owed the state nearly Sk2.8 million (€93,000) in unpaid taxes, but was granted a subsidy after its authorised representative, Miroslav Mečíř, signed a statement confirming that his organisation had settled all its debts to the state.

Privilégium was forced to return the subsidies in August 2007. In late June 2008, Štěpánka M., the authorised representative of Privilégium, was charged with fraud.