SACKED former agriculture minister Zdenka Kramplová, says she was fired for refusing to bowing to political pressure when awarding ministerial contracts. But political analysts say that even though there’s some truth in that, she still deserved to lose her job. 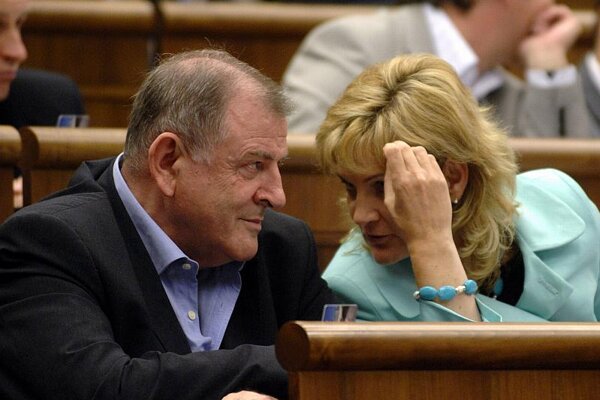 After being close political allies for more than a decade, Vladimír Mečiar and Zdenka Kramplová have parted ways. (Source: ČTK)
Font size:A-|A+

SACKED former agriculture minister Zdenka Kramplová, says she was fired for refusing to bowing to political pressure when awarding ministerial contracts. But political analysts say that even though there’s some truth in that, she still deserved to lose her job.

On August 14, Prime Minister Fico unexpectedly announced that he was dismissing Kramplová at the request of Vladimír Mečiar, whose party, the Movement for a Democratic Slovakia (HZDS), originally nominated her.

The reasons for this, according to the media, were the controversy surrounding the HZDS’s recent annual report – which Kramplová certified – and an Agriculture Ministry tender worth almost a billion crowns awarded to a company with ties to a HZDS corporate sponsor.

Fico declined to comment further on the dismissal, saying only that audits would reveal any mistakes. But he did add that he had not detected any major shortcomings in Kramplová's work.
Kramplová has vigorously denied any wrongdoing.

“My conscience is clear,” she said at a press conference on August 14.

She later told the Hospodárske Noviny and Sme dailies that she had been sacked because she had refused to award tenders preferentially.

A review of the HZDS's annual report by a parliamentary committe in June found that a Sk10 million loan to the HZDS was apparently repaid by two party supporters – the owner of an indebted company and an 82–year–old pensioner.

The pensioner told the media that his cash donation of Sk7 million had been delivered to HZDS headquarters in a plastic carrier bag. Kramplová was the party official responsible for certifying the annual report, so when suspicions around the loan and its repayment came to light, she quickly became the object of scrutiny by media and the opposition in parliament.

But she has stood by her preparation of the report.

The loan gained even greater significance when connected to a Sk900-million Agriculture Ministry tender recently won by a company called Columbex International.

Kramplová told the dailies that Columbex was among five companies that bid for the contract, to harmonise information systems at the ministry, and that it was chosen solely on the basis of the price at which it tendered.

But the dailies noted that one of Columbex's top managers is Alexej Beljajev, who also heads the company that lent the HZDS the Sk10 million at the centre of the controversy.

Kramplová maintains that the loan and the selection of Columbex for the tender are coincidental.

But she did say that, after the media started asking questions about the annual report, that Mečiar had requested in private that she terminate the contract with Columbex.

As a result, she says, she filed a motion with the Public Procurement Office to examine the tender. Miroslav Jureňa, Kramplová’s predecessor and vice-chairman of the HZDS, who was himself sacked in November 2007 over allegations of cronyism, acknowledged to journalists that the HZDS had sought information about what tenders had been approved in the agriculture sector.

Jureňa argued that since it was the HZDS that nominated Kramplová, the HZDS should bear the responsibility for investigating any suspicions of wrongdoing.

“It is also our duty to monitor what has been happening at the ministry,” Jureňa said on August 14.

The next day, Kramplová told the SITA newswire that the contracts were paid for out of public funds, not party resources. She said that blaming her for not informing the party about contract awards was "scandalous, and harms the HZDS and the whole governing coalition.”

Smer party spokesperson Katarína Kližanová-Rýsová told the Sme daily that Fico would not comment on claims against members of the HZDS.

“The Office for Public Procurement and the Supreme Control Office must say whether the tender was in compliance with the law, not the Sme daily,” she said.

Emília Beblavá, president of Transparency International Slovakia, a non-governmental watchdog, told The Slovak Spectator that she saw no reason not to suppose that top HZDS representatives had put indeed pressure on the Agriculture Minister when it came to choosing which firms would get public orders.

Beblavá also said that the way the ministry chose to organise the tender in the least transparent way. Such huge amounts, like Sk900 million, should not be awarded without prior public announcements.

“An open public competition is necessary for that,” she said. “The market is relatively extensive, and there are many [eligible] firms here, enough potential suppliers.”

Beblavá could not say why Kramplová was fired. But she said it was astounding that the same people were behind both the dubious financing of the HZDS and the company which won the tender.
“So the suspicion that this could be an improper source of financing for political parties is real,” Beblavá said.

Beblavá also said that whatever the reason for Kramplová's dismissal, her sacking was justified.

Kramplová failed in her choice of tender process, as well as in the way she documented the HZDS’s financing.

“I think that nobody, who has followed public life in Slovakia in the last nearly 20 years, can doubt that there is cronyism in parties here, and that it is also present in the HZDS,” Beblavá stated.

Grigorij Mesežnikov, president of the Institute for Public Affairs, a non-governmental think tank, stressed that in connection with the dubious tender at the ministry, but also with other cases which have recently led to the removal of other ministers, the cabinet of Robert Fico has linked finance to politics in a way which exemplifies cronyism.

“This government has made cronyism its modus operandi,” Mesežnikov said.