CONTROVERSY has already surfaced about one of the two new ministers appointed to the Robert Fico cabinet, just days into his term in office. Ján Chrbet and Stanislav Becík were appointed on August 18. Chrbet was nominated by the Slovak National Party (SNS) to be the environment minister and Becík was nominated by the Movement for a Democratic Slovakia (HZDS) to be the agriculture minister. 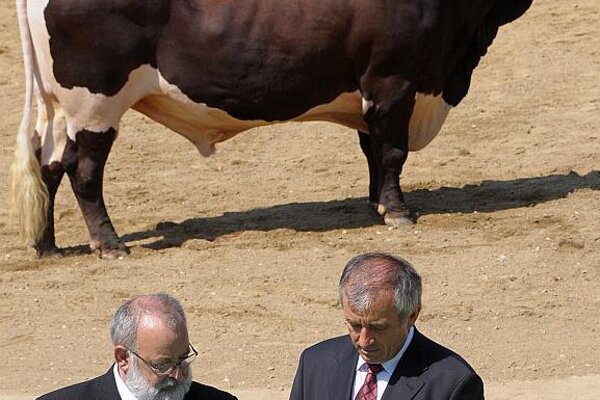 CONTROVERSY has already surfaced about one of the two new ministers appointed to the Robert Fico cabinet, just days into his term in office. Ján Chrbet and Stanislav Becík were appointed on August 18. Chrbet was nominated by the Slovak National Party (SNS) to be the environment minister and Becík was nominated by the Movement for a Democratic Slovakia (HZDS) to be the agriculture minister.

Soon before, the Hospodárske Noviny daily reported that Chrbet used to hold a managerial position in Tomo-Tech and Skywa, two firms that had owed a combined debt of Sk375,000 to the Sociálna Poisťovňa social security provider.

That debt was settled on the same day that Chrbet learned he would become environment minister, the daily wrote.

After his swearing-in ceremony at the Presidential Palace, Chrbet was peppered with questions about his companies’ finances, but declined comment.

“The questions will be answered at a press conference once I assume my duties at the ministry,” he promised.

SNS spokesperson Jana Benková wrote in a press release on August 20 that, in accordance with the law, Chrbet changed from a managerial post to an ownership position in all his companies when he became an MP in 2006.

“It is true that the companies owed money to Sociálna Poisťovňa, but this has already been repaid,” the statement reads.

Its statement also pointed out that the debt had been paid by the firms that owed it, not by Chrbet personally.

But an excerpt from the Trade Register’s website clearly lists Tomo-Tech's director as Jana Chrbetová.

The website also lists Chrbet as having a position in Skywa.

Zuzana Wienk of the Fair Play Alliance told The Slovak Spectator that she strongly believes the minister’s financial history and the repayment of his companies’ debts should be explained openly.

“If the minister hides anything about these debts, I think there is some risk that he could repay them using public money,” Wienk said.

Adding gasoline to the fire, Pravda reported on August 20 that Skywa and Davoz, another of Chrbet’s companies, owes money to the Justice Ministry for publishing in the Trade Journal.

It wrote that the ministry has recently called on all businesses that owe a similar debt to pay up or face court. It lists Skywa and Davoz as owing three invoices of Sk600 each.

Also potentially troubling is information from the Trade Register's website that Chrbet’s Davoz Trading conducted business with Jozef Šikrha, the former boss of SUN, a non-banking financial company that is now bankrupt.


Šikrha is accused of having embezzled around Sk444 million (€14.74 million) from more than 600 clients.

“The business dealings stopped after a difference of opinion with Šikrha,” Višváder told Pravda on August 20.

The SNS statement from August 20 included a sharp rebuke of Pravda's reports.

“The SNS rejects any speculation and attempts by journalists who lack proper stories to drag Chrbet’s name through the mud,” the statement reads.

Becík was formerly the managing director of the Dvory nad Žitavou agricultural cooperative.

Shortly after his swearing-in ceremony at the Presidential Palace on August 18, Becík refused to comment on the suspicious Sk900-million tender that allegedly caused Kramplová’s downfall.

“It will all be investigated and researched, and decisions will be made according to the findings,” Becík said.