ENERGY companies risk expropriation if they fail to incorporate the public’s social situation into their pricing schemes. This was the thrust of recent statements made by Slovak Prime Minister Robert Fico as part of his widely-heralded “get tough” approach to energy monopolies. 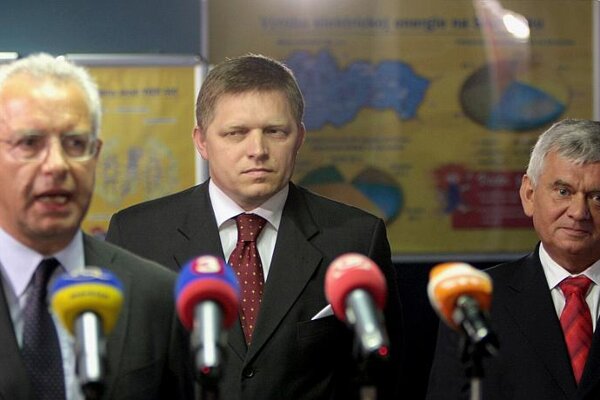 ENERGY companies risk expropriation if they fail to incorporate the public’s social situation into their pricing schemes. This was the thrust of recent statements made by Slovak Prime Minister Robert Fico as part of his widely-heralded “get tough” approach to energy monopolies.

Though lawyers say that the constitution allows for expropriation in the public interest, it would produce a hefty bill for the state. The opposition has expressed about the prime minister’s ultimatum. And the companies involved have been reserved in their responses, unsure whether the statements are a true expression of the government’s intentions or simply voter-tailored rhetoric.

The government is ready to take extreme measures, including expropriation, if power monopolies do not consider the public’s purchasing power when setting prices, Fico said. He added that the state will eventually lose patience.

“I would like to remind all the foreign owners of energy monopolies about Article 20 of the Slovak Constitution, which reads that expropriation is possible in the public interest,” Fico said, as quoted by the SITA newswire on August 18. “If they proceed with policies that go against the state interest, and it is not only about Enel, but also about the attitude of foreign owners of energy monopolies, we won’t hesitate to wield even extreme measures.”

Fico said his government is strongly socially oriented, which means that his administration must keep the population’s social situation in mind in every decision it makes.

Both major power producer Slovenské Elektrárne and gas utility Slovenský Plynárenský Priemysel (SPP) have defended their prices and reject the allegation that they are abusing their market position. The companies have also refused to weigh in on Fico’s statements.

“We prefer not to comment on speculation and political statements and we have not yet been officially told that the state would choose expropriation,” Juraj Kopřiva, spokesman of Slovenské Elektrárne, in which Italian company Enel holds a majority share, told The Slovak Spectator.

Kopřiva said that Slovenské Elektrárne is only an electricity producer, which means it does not propose prices for the Regulatory Office for Network Industries (ÚRSO); the prices are proposed by the distribution companies, in which the state holds a majority share.

“Gas prices are transparent, in line with legislation, and reflect justified expenses and profit,” SPP spokeswoman Dana Kršáková told The Slovak Spectator. “They are also monitored by the ÚRSO.”

Political scientist Grigorij Mesežnikov from the Institute for Public Affairs think tank said that Fico’s statements are meant to appeal to voters by pressuring energy producers.

“The government has been pressuring monopolies since before now,” Mesežnikov told SITA. “Smer is worried about the impact of euro adoption.”

Martin Chren, director of the F.A. Hayek Foundation, told SITA that the state would come out with the short straw from any expropriation of SPP or SE because it would have to reimburse investors at the current market value.

On July 2, the Fico government gave the ÚRSO more authority to cap energy prices. But observers doubt whether state regulation is the right way to tackle rising prices.

Fico said regulation is one way to prevent low-income households in Slovakia from spending a higher share of their income on energy than anywhere in the European Union.

Prices would be capped from 2009 until the share of household income expenditure on energy reaches the EU average, Fico said.

Gas suppliers will only be able to charge regulated prices to households whose annual consumption does not exceed 6,500 cubic metres, the cabinet said in its official report.

Electricity producers will have to supply at least 6 TWh of electricity at a price set by the regulatory authority to households without electric heating with an annual consumption up to 5,000 kWh; to households with electric heating that consume up to 20,000 kWh per year; and to small companies with an annual consumption of up to 30,000 kWh, according to government information.

The SE has already appealed against the Economy Ministry’s decision that the utility will have to supply households with 6 TWh of electricity at a price set by the regulator.

According to Kopřiva, the move is also at odds with the Slovak Constitution, energy legislation, laws on the regulation of network industries, and legislation on competition.

As for SPP, retail prices of natural gas went unchanged until 1999, which means the company had been spending more than customers had been paying, according to Kršáková.

The company covered the deficit with revenues from international distribution.

However, such cross-funding was at odds with the EU legislation, so the company had to scrap it and harmonise prices with real values, Kršáková said.

The last time SPP increased prices was in November 2006. In January 2007, it trimmed prices by an average of about 4 percent. At that time, the price of oil stood at $60 a barrel.

Since the beginning of this year, prices have risen past $100 a barrel and close to $150. Since January 2007, prices for households have shot up by 13-42 percent, Kršáková said.