THE EVENTS of August 15 will be written in golden letters in the chronicles of Slovak sports history.Twin brothers Peter and Pavol Hochschorner and Elena Kaliská, both competing in the water slalom, won gold medals within 36 minutes of each other at the XXIX Olympic Games in Beijing. 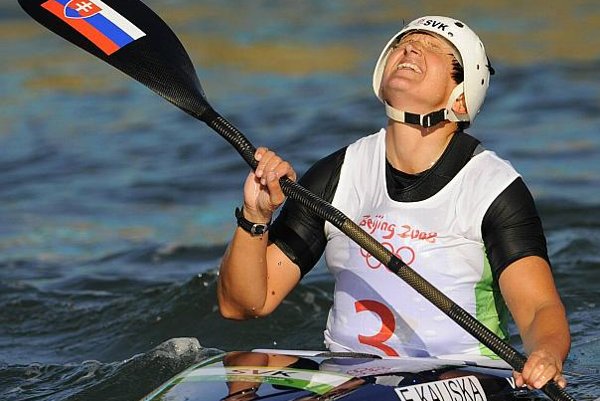 THE EVENTS of August 15 will be written in golden letters in the chronicles of Slovak sports history.Twin brothers Peter and Pavol Hochschorner and Elena Kaliská, both competing in the water slalom, won gold medals within 36 minutes of each other at the XXIX Olympic Games in Beijing.

All three had to wait a day after a storm postponed their events at the Shunyi Olympic Rowing-Canoeing Park on August 14.

The Hochschorners, who won their third gold medal in a row, confirmed that they rule the C-2 (canoe double) category. The 28-year old brothers from Komárno won with a time of 190.82 seconds, which was a two-second lead. The Czech team of Jaroslav Volf and Ondřej Štěpánek were second with 192.89 seconds and Russian Michail Kuznecov and Dmitrij Larionov came in third with 197.37 seconds.

“That boulder that’s been lifted off my chest was the size of Kriváň,” Pavol Hochschorner said with the gold around his neck.

He was referring to both the burden of medal expectations and the anxiety caused by the event’s postponement.

The brothers competed in the finals that day, but Kaliská battled through the semi-finals and finals. She defended her Olympic white-water singles kayak title and won her second Olympic gold with a final time of 192.64 seconds, a 14-second lead. In her category, a lead of as little as two seconds is considered significant.

“The size of the lead wasn’t as important as winning number one,” Kaliská said. “The feeling is indescribable.”

The victory has motivated the Hochschorner twins. They said they have already set their sights on the 2012 Olympics in London. But the future is not as clear for 36-year-old Kaliská.

“We will see what is next,” Kaliská told the SITA newswire. “Everything is open. Now I can’t say the final verdict about my future.”

On August 21, David Musuľbes added the bronze in 120kg freestyle wrestling to Slovakia’s collection with a win against Disney Rodriguez from Cuba. Musuľbes, a winner for the Russian team at the Sydney Olympics, was given Slovak citizenship in 2007.

“I hoped that I would win the gold at the end of my career,” Musuľbes said as quoted by the SITA newswire. “I will probably have to continue to London. I would like people to remember me as a winner. But it is too early to say what will happen.”

Musuľbes, who won gold at 2000 Sydney games, was a favourite for medals in his category.


“This year he won the European championship,” Ľubomír Souček, the press attaché of the Slovak Olympic Committee, told The Slovak Spectator. “As with all wrestlers who competed in his category in Beijing, he had an active balance … performed excellently and fulfilled the hopes placed in him.


“It is ironic that someone from the former Soviet Union won the bronze for Slovakia on the 40th anniversary of its invasion by Warsaw Pact troops. It is as a symbol of how the times have changed in both countries.”

By the time The Slovak Spectator went into print, the Slovak flat-water team of Richard Riszdorfer, Michal Riszdorfer, Erik Vlček and Juraj Tarr was scheduled to compete in the men's K-4 1000m on August 22.

But for other Slovak athletes, the Olympics have been a disappointment.

“This Slovak Olympic team had great potential, not all of which was fulfilled,” Souček acknowledged to The Slovak Spectator. “This is in spite of the fact that we have three medals and in the ranking of countries we have stayed high.”

Slovak athletes achieved gold in water sports. On top of that, shooter Zuzana Štefečeková won a silver and Musuľbes won a bronze.

“The biggest disappointments were the sports in which we had the highest number of athletes in the history of independent Slovakia,” Souček said. “So far (until August 21), none of them met their potential. Except runner Lucia Klocová, who narrowly failed to make it into the finals of the 800 metres, they did not even approach performances as good as earlier this year.

“This is quite alarming,” Souček continued, adding that the athletes’ physical condition is not the problem. “They fail mentally.”

Hammer thrower Libor Charfreitag left the Games empty handed after achieving a total of only 78.65 metres. This landed him in eighth position, two spots below what he had hoped would be his worst.

And another hammer thrower, Martina Hrašnová, also ended eighth, with just 71 metres. That was more than five metres behind her best results.

Dana and Jana Velďáková, two more twins on the Slovak Olympic team, risk going down in Slovak sporting history for both failing to record a single valid jump between them. Dana, who competed in the women's triple jump, was left behind after her three jumps were invalidated for foot faults. Her sister suffered the same fate in the long jump.

In the shooting categories, Slovakia multi-medallist Jozef Gönci ended without winning any significant placing. Now in his fourth Games, he ended 16th in the men's 50 metre rifle prone on August 15 and failed to advance to the finals in the men's 50m rifle 3 positions on August 17.


Windsurfer Patrik Pollák, the 2006 world champion in raceboarding, ended 30th in the third Olympic Games of his career.

And triathlete Pavel Šimko had a stroke of very bad luck. About 1,000 metres into the start of the swimming part of the competition, one of the other competitors accidentally kicked him in the head so hard he had to pull out.