History is the common link

BULGARIA and Slovakia share a great deal of common history, be it ancient or recent. This interlinks the two nations and creates an interest in getting to know each other better. One of the channels for this is the Bulgarian Cultural Institute (BKIS) in Bratislava. 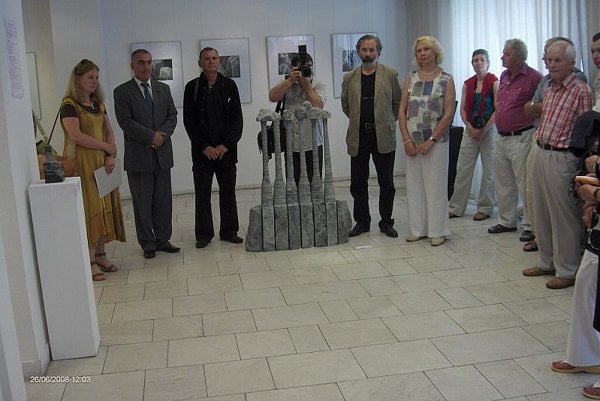 Ivan Rusev (third from the left) attended the opening of an exhibition of his works during the Sculpture and Object project. (Source: BKIS)
Font size:A-|A+

BULGARIA and Slovakia share a great deal of common history, be it ancient or recent. This interlinks the two nations and creates an interest in getting to know each other better. One of the channels for this is the Bulgarian Cultural Institute (BKIS) in Bratislava.

Founded in 1971, the institute’s main mission is to be an emissary of Bulgarian culture in Slovakia, assist in establishing Bulgarian-Slovak contacts within the cultural sphere, and actively cooperate with the Bulgarian minority in Slovakia.

“We endeavour to help preserve Bulgarian national identity and its integration within the diversity that exists in Europe and the world, keep Bulgarian national features, and extend and deepen the contacts Bulgarian culture has with the world,” Elena Arnaudova, the director of the Bulgarian Cultural Institute in Bratislava, told The Slovak Spectator.

It pursues its goals by holding exhibitions, presenting books, concerts, meetings and conferences, and screening Bulgarian films. It also runs courses on the Bulgarian language. The institute’s traditional role also includes organising scientific conferences about the heritage of Saints Cyril and Method, Christian missionaries whose history is celebrated among Slavs.

The institute participates in the annual Sculpture and Object, an international outdoor exhibition of sculptures in Bratislava, as well as the November photo festival, Month of Photography.

“This year, the excellent sculptor Ivan Rusev is representing Bulgaria at the exhibition,” Arnaudova told The Slovak Spectator.

“He organises a sculpture symposium in the Bulgarian village of Ilindenci that is often attended by Slovak artists. At the moment, Rusev is taking part in a symposium in Topoľčianky.”

During the 18th Month of Photography, which primarily focuses on Central and Eastern Europe, Bulgarian Velislava Stoycheva will display her photos.

Among other projects in the pipeline are a display of drawings and aquarelles by Eugen Lehotský entitled Impressions from Bulgaria, Arnaudova said. The exhibition, which opens on September 3, will present works the Slovak artist created during his study in Bulgaria in 1957.

September will be of special significance for Bulgaria, which will mark a hundred years of independence.

“This event is closely connected with Bulgaria’s Tsar Ferdinand, who after abdicating in 1918 lived in the manor house in Svätý Anton, a village close to Banská Štiavnica, in central Slovakia, until 1945,” Arnaudova said.

“Both these exhibits, after being presented in Sofia, will come to Slovakia first before continuing on their tour,” Arnaudova told The Slovak Spectator.