THE EDUCATION Ministry might be talking optimistically about the launch of its new education reform, which is now coming into force with the arrival of the new academic year, but non-governmental organisations and the opposition say it has left schools in chaos. 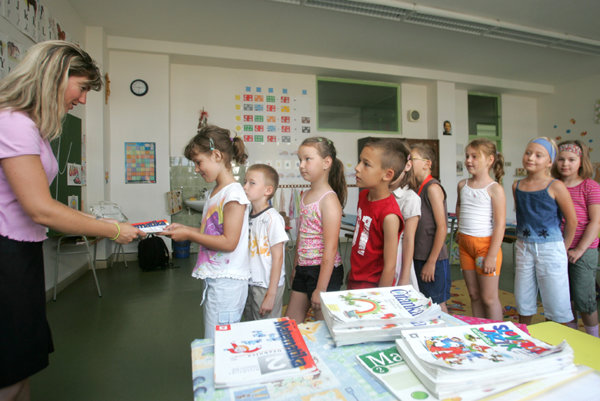 THE EDUCATION Ministry might be talking optimistically about the launch of its new education reform, which is now coming into force with the arrival of the new academic year, but non-governmental organisations and the opposition say it has left schools in chaos.

The new act is intended to give more freedom to schools within the education system. As set out in the act, the state sets the obligatory curriculum through so-called public education programmes; schools themselves are then supposed to create school programmes through which they set the rest of their curricula.

According to the opposition and NGOs, however, these aims are no more than formal declarations. They say that the reform in fact robs schools of their freedom instead of expanding it. They also say that education reform has not been sufficiently prepared since the act was passed at the beginning of July, when the schools’ summer holidays were beginning.

The ministry rejects such criticism. Ján Mikolaj, the education minister, who is a Slovak National Party (SNS) nominee, told the private TV channel Markíza on August 31 that education reform will be introduced gradually into schools. “The launch process will last for four to five years,” Mikolaj said.

However, several school employees joined NGOs and the opposition in criticising the act. Marián Šteffko, headmaster of the Secondary Grammar School of Viliam Paulíny-Tóth in Martin, told the Plus Jeden Deň daily on August 30 that it was arguable whether schools would really end up with greater freedom. He also criticised the lack of time spent preparing for the process of teaching.

“A responsible school programme can hardly be put together in one or two weeks, without even a single teacher having had training,” Šteffko explained. “Thus, it all depends on [teachers’] creativity and willingness to do something outside their work duties”.

In a speech marking the beginning the school year, Mikolaj conceded that at some schools teachers will not be able to implement the reform on schedule. The minister admitted that the human factor plays a role. According to him, some teachers will adopt the reforms more actively. “In other places, the launch will be slower”, Mikolaj said. “It is up to each school, and each teacher, how it, or he or she, uses the opportunity for reform,” he stressed.

According to Education Ministry spokesperson Dana Španková, headmasters could have consulted on their school programmes with the State Pedagogic Institute (ŠPÚ) at any time during the summer. “And they will still have ŠPÚ experts at their disposal. So co-operation has not been limited,” Španková told The Slovak Spectator.

Zuzana Humajová, an analyst at the Conservative Institute, a non-governmental think-tank, responded that the ministry simply had no mechanism to receive feedback. “There is no systematic collection of data, thus it is hard to answer the question of how well-prepared schools are the new school year”, Humajová told The Slovak Spectator.

She said that without systematic analysis of the problems being faced by schools employees of the ministry or the ŠPÚ cannot determine how schools are handling the job of creating new school programmes in line with the education reform. Specifically, Humajová stressed, it is not known “how many schools have managed it, and in what quality.”

Humajová added that the Conservative Institute co-operated with at least sixty elementary schools in various regions. In their opinion, the summer months were a very problematic period.


Not every school managed to create its own school programme. “Even if they called the ŠPÚ, they got different information, as ministry officials themselves did not know how to interpret the new legislation clearly.”

The biggest problem, Humajová said, was that schools had trouble working out how to compose the list of so-called optional subjects. “It was not clear whether schools could create their own subjects based on their own ideas.”

“As for the declared freedom of schools within the reform, schools were not sure what the limits to this freedom were,” she said.

Martin Fronc, a former education minister and currently an MP for the opposition Christian Democratic Movement (KDH) told The Slovak Spectator that the new school programme’s introduction has been traumatising.

“The new act, which has been rushed through very quickly, is just for effect and conditions have not been prepared to implement the reform; rather the contrary,” Fronc said.

According to Fronc, this poor preparedness has badly affected teachers, but will later have impact on pupils and parents as well.

Moreover, Fronc said that the new school act mimics reform but in fact brings no basic change in the way of teaching.

Fronc stressed, like Humajová, that the new act did not allow legislative space for greater use of alternative textbooks.

According to Fronc, the chance for reform, which he said is badly needed by the Slovak education system, has been missed. Moreover, resources currently available from European funds could be used to improve the process of teaching at Slovak schools. “Now it seems that these resources will, firstly, not be drawn on or, secondly, will go rather towards new computers and school equipment, than on improving the method and quality of teaching,” Fronc told The Slovak Spectator.

“The teaching at schools will continue more or less in the old way,” Fronc added.


But schools should be able to apply the new act, which replaces an earlier one from 1984, in at least one area.