CLIMATE change, global warming and whether mankind's activities might be having some impact on the climate of the planet have become hot topics of discussions for scientists and businesspeople, as well as the public. To make a definite and lasting impact on the climate change debate and to fight the phenomenon the British Council has launched the Challenge Europe programme. 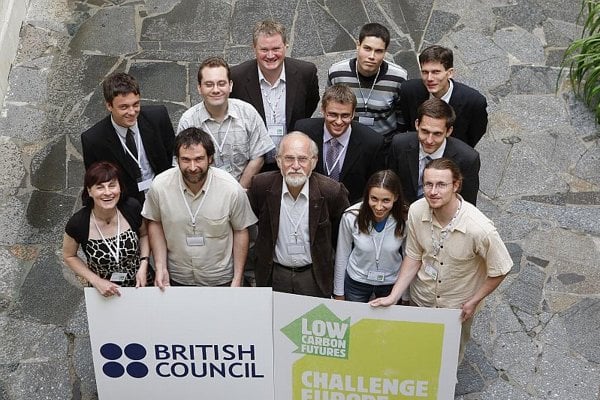 CLIMATE change, global warming and whether mankind's activities might be having some impact on the climate of the planet have become hot topics of discussions for scientists and businesspeople, as well as the public. To make a definite and lasting impact on the climate change debate and to fight the phenomenon the British Council has launched the Challenge Europe programme.

Slovakia is one of 15 European countries which have joined the three-year programme. On June 6, in Bratislava, the British Council in Slovakia introduced 11 climate advocates, who are members of a team of over 220 dynamic 18 to 35 year olds from all walks of life being assembled to work together to cut Europe’s carbon footprint.

“In total more than 20 young people have sent their applications to join the programme,” Anna Kováčová, the Challenge Europe coordinator from the British Council in Slovakia, told The Slovak Spectator. “We selected 11 of them who met the criteria. Apart from the age criterion, another was a good knowledge of English since they will communicate with advocates from other countries who are engaged in the topic either as part of their job or during their free time.”

An independent panel of representatives of the British Council and partners organisations picked the advocates in order to create a diverse team of people from various backgrounds. There are students, scientists engaged in solving problems related to climate change, as well as people working in the commercial sector and for non-governmental organisations.

“It might have been better to have 20 climate advocates, as the goal of this pilot year was to have between 15 and 20 advocates in each country,” said Kováčová. She also wanted to have a team of advocates with a wider range of professions.

“We have endeavoured to address not only people who work directly in this sector, but also those who do something different apart from dealing with climate change from the scientific point of view,” explained Kováčová. “They might be journalists who write about climate change, or filmmakers who make films about it.”

There is a limited opportunity for more candidates to join this year’s project in the next month, but a new team will be recruited to join the second and third years of the programme in 2009 and 2010.

After a first meeting in June, this year's Slovak climate advocates met on July 5 to discuss in more detail the themes on which they want to work during the next year.

“The debate resulted in six rather broad themes, from which they will pick three,” said Kováčová. “These are renewable energy resources, environmental education, working on an innovative information brochure, cooperation with the media in this segment, land use, and a proposal to think over possibilities for changing legislation.”

During forthcoming sessions, of which the first is planned for September, the Slovak advocates will select three themes and think about them more deeply.

“They should give the reasons why they picked them, think over the current situation in Slovakia and whether these problems are already being solved [here], what they want to achieve and who is the target group,” explained Kováčová. “They should also find out whether this issue has already been addressed abroad and map out organisations and individuals who are active in this or similar segments.”

The outcome is that the network of young advocates together develops 40 concrete, tangible ideas, approximately three from each national team. The project will be repeated for two more years.

Through its partnership the British Council will support these young Europeans on their quest, offering them access to some of the best minds in Europe through established networks of expert groups and individuals.

In every involved country the programme has enlisted patrons. In Slovakia they are the respected climate scientist Professor Milan Lapin and singer Katka Koščová.

“Such projects make sense because they focus particularly on young people and people who are interested in environmental politics and activities,” Lapin told The Slovak Spectator. “It must start from individuals, because the aggregate emission of greenhouse gases depends in particular on consumption and the behaviour of the population.

“If people’s high consumption of goods whose production causes large emission of greenhouse gases continues, then industry can do nothing and the country will release large amounts of such gases into the atmosphere,” Lapin said.