EVERY Slovak child learns that Eugen Suchoň composed the country’s national opera, Krútňava. But they probably don’t know what that title means. (It’s an archaic or poetic word for “whirlpool.”) 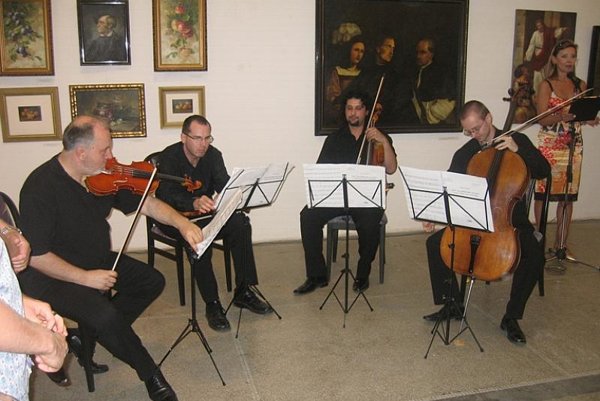 The project is a mix of music and fine art. (Source: Veronika Gabčová)
Font size:A-|A+

EVERY Slovak child learns that Eugen Suchoň composed the country’s national opera, Krútňava. But they probably don’t know what that title means. (It’s an archaic or poetic word for “whirlpool.”)

In fact, there’s a lot people don’t know about Suchoň. So this year, in honour of the 100th anniversary of his birth, the Elpida art support association, together with the Slovak National Theatre, the Slovak Fine Art Union and the Slovak Music Centre, have organised a touring exhibition dedicated to Suchoň’s music and life.

“Our aim is not only to draw people closer to the maestro’s compositions, but to present him as a gifted painter, because hardly anybody knows him like that,” said Veronika Gabčová, artistic co-ordinator of the project, which continues until the end of November.

The original concept for the exhibition was a display composed exclusively of works by several contemporary artists that would complement Suchoň’s music, but Gabčová, who works as a painter, designer, sculptor and restorer, came up with the idea of showing Suchoň’s paintings as well.

“Three years ago, I worked with Danica Štilichová-Suchoňová, the artist’s daughter, on restoring several of his paintings,” Gabčová told The Slovak Spectator. “This memory struck me when we were preparing the project, so we, with Štilichová-Suchoňová’s permission, borrowed the paintings to put them on show alongside some contemporary ones.”

To keep the project true to its name, “Tracing Eugen Suchoň’s footsteps”, the organisers have installed the exhibition in the three towns where the revered composer lived and worked. After an opening ceremony that was held in June at the Slovak National Theatre and attended by some 150 people, the display was placed in the Slovak Fine Art Union Gallery in Bratislava. It attracted as many as 200 visitors in just a week.

Several hundred art enthusiasts admired the paintings at the Palace of Art in Piešťany. The last stop of the project before returning to the capital is Pezinok, where the exhibition was launched on September 5 and will be available until October 5 at the Prokop Gallery.

“The closing ceremony will again take place at the new building of the Slovak National Theatre on October 30,” Gabčová remarked.

She added that a concert and a retrospective display would be prepared for visitors, with the maestro’s compositions being interpreted by the renowned Lúčnica folk dance ensemble. The paintings themselves will be exhibited at the theatre until the end of November.

The contemporary works accompanying Suchoň’s paintings were created by Petra Vlhová-Jureňová, Jozef Krakovský, Jaroslav Uhel, Miloš Packo and by Veronika Gabčová herself, who even made several ad hoc pieces inspired by the composer’s music.

Every part of the exhibition was curated by a different prominent figure from the Slovak arts scene and all the openings were accompanied by musical performances and various readings.

“We sought to make the display interesting for visitors of all ages,” said Eva Rohrman-Madová, director of the Elpida association. “That is why we opted for a multi-genre approach that helped us to link modern and classical arts.”

The opening programmes were, however, not the only attractive parts of the project. Two series of creative workshops led by Gabčová and Vlhová-Jureňová took place in Bratislava and Piešťany, with attendance ranging between 20 and 30 people.

“The workshops were very well received,” Rohrman-Madová told The Slovak Spectator. “The participants could try manifold artistic techniques and they even managed to bear their first fruits.”

Rohrman-Madová said that Suchoň deserves such celebration because he made an unparalleled contribution to the global arts scene.

“Suchoň’s body of work has always been considered an embodiment of the highest artistic and human qualities,” she observed. “He drew his inspiration from both classical works of art and Slovak folklore.

This enabled him to crystallise his own manner of expression, characterised by great inventiveness and an ability to compact details into a single, comprehensive whole.

In so doing, the composer created a new style of music, or even a new way of perceiving aesthetics, and managed to enrich the musical scene in Slovakia and the world.”

The Theatre Institute, in cooperation with the Music Museum of the Slovak National Museum (SNM), has also organised an exhibition to mark Eugen Suchoň’s 100th birthday. The ambition of the display in the SNM building at Vajanského Nábrežie in Bratislava is to present the composer in as extensive an artistic and social context as possible.

It traces his life since birth in Pezinok, through his youth, and studies up through his time as a respected composer, music theorist, teacher and cultural figure.

The focus is on his two operas – Krútňava and Svätopluk, the latter of which is a drama about a significant Slovak historical figure. These are presented via photos, drafts and models by set designers, costumes and videos.

Krútňava, which debuted in 1949, has been staged in 12 different productions in Slovakia and 24 productions abroad.