The fastest but not the highest

LAST year the prices of new apartments in Slovakia grew faster than in any of the other Visegrad Four (V4) countries. But despite the fast growth, new apartment prices in Slovakia have yet to reach the highest levels in the V4 region, which also includes the Czech Republic, Hungary, and Poland. 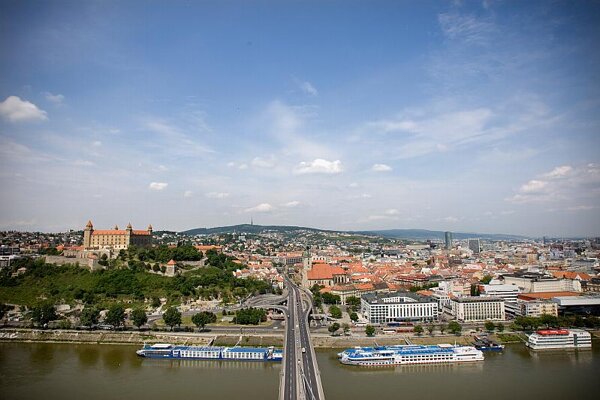 New apartments in Slovakia are the third most expensive or second cheapest in the V4. (Source: SITA)
Font size:A-|A+

LAST year the prices of new apartments in Slovakia grew faster than in any of the other Visegrad Four (V4) countries. But despite the fast growth, new apartment prices in Slovakia have yet to reach the highest levels in the V4 region, which also includes the Czech Republic, Hungary, and Poland.

Currently, it is the Polish who have to pay the most for a new apartment. They are followed by Czechs, while Hungarians pay the lowest prices. Slovaks have the second cheapest apartments in the region.

These findings came out of a survey conducted by King Sturge, a property consultancy, which focused on new residential property on sale in the V4 countries. It compared average prices inside and outside the capitals of the V4 countries.

“The prices of new residential property in the majority of V4 countries are approaching a temporary ceiling and in some regions prices have even begun falling,” said Janka Polyaková, from the residential department at King Sturge.

In the V4 ranking of prices for new flats, the Czech Republic is in second place. A buyer in Prague should expect to pay €2,486 per square metre. In other Czech locations, apartments cost €1,407 per square metre as of July 2008.

Prices in Hungary have so far recorded only a slight increase, according to King Sturge. One square metre in an apartment outside the capital cost €891, on average. In Budapest a buyer would pay €1,290 per square metre.

New apartments in Slovakia are the third most expensive (or second cheapest) in the V4. The average price of a new residential property in Bratislava stood at €2,165 per square metre, while in other Slovak regions it was €1,404.

“However, Slovakia is … where prices for one square metre of new housing grew the fastest among all the Visegrad Four countries in 2007,” added Polyaková.

The significant increase of prices in Bratislava and whole of Slovakia was mainly caused by consistently strong demand for real estate.

Bratislava has become a lucrative destination for foreign investors thanks to its strong economic potential, said Polyaková.

Several new luxurious and expensive projects launched in Bratislava, and the still-favourable terms for mortgages, have also supported the growth of prices to their current levels.

“Of course, euro adoption in January 2009 is also playing a significant role,” said Polyaková. “For many buyers, investment in real estate is a guarantee of the appreciation of their money.”

The future development of prices for new property in residential projects will be positively influenced by economic growth, stable demand for new housing and the increase in incomes. “There is still a relatively strong group of buyers in Slovakia,” Polyaková added.

Among factors which might negatively affect prices, she listed growth in interest rates, the increasing of cost of residential development, and a possible rise in inflation.

King Sturge does not expect the forthcoming year to bring significant changes to the new residential real estate market in the V4 region. In the Czech Republic and Slovakia it expects price growth of up to 15 percent. In the capitals, it should reach up to 8 percent in Prague and up to 10 percent in Bratislava.

Next year, the prices of new property in Poland should stabilise and growth is forecast not to exceed 2 percent. The same mild increase is expected in Hungary, because demand for new housing there is not as strong as in Slovakia and the Czech Republic, according to King Sturge.

Based on data from the National Bank of Slovakia, in the second quarter of 2008 prices of all residential property in Slovakia grew by 31.2 percent year-on-year, reaching an average of Sk46,658 (€1,549) per square metre. In the first quarter, growth stood at 34.5 percent year-on-year. The central bank processes the data in cooperation with the National Association of Real Estate Agencies (NARKS).