Devín was buried in order to save it

THE RESIDENTS of Devín, a section of Bratislava that includes Devín Castle, staged a symbolic funeral for their district on September 7. 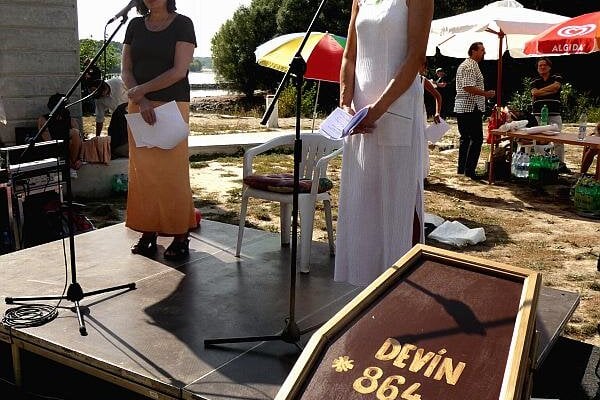 THE RESIDENTS of Devín, a section of Bratislava that includes Devín Castle, staged a symbolic funeral for their district on September 7.

The unconventional protest had just one aim: to provoke a public debate on the fate of the district’s distinct character, which the inhabitants contend is at risk. Swedish construction firm Skanska plans to build 23 four-storey apartment houses, which would double the district’s number of residents to a thousand, without building any additional public amenities, the Pravda daily wrote.

Representatives from the investor did not take part in the symbolic funeral. But the Devín residents who gathered at the confluence of the Morava and Danube rivers for the event were supported by many artists and other personalities. For example, opera singer Martin Malachovský sang for the crowd of about 200 people, top Slovak cellist Eugen Prochác played, and actor Jozef Vajda, who lives in Devín, recited lines in its honour.

“I firmly believe that there is still some hope that the deceased will be revived and not absorbed by the construction of a housing estate,” said actress Zuzana Kronerová, who hosted the event organised by the Za krajší Devín (For a more attractive Devín) civic association.

At the end of the event, a coffin with the inscription “Devín 864-2008?” was carried by a procession of protesters across the entire village, and all the way to the yard of the local townhouse, where it will stay, pending the district’s fate. If the protest is successful, the plan is to send the coffin down the Danube as unnecessary.

Devín was connected to Bratislava in 1946, but has preserved a rural feeling. This is why the protestors are asking the investor to build fewer, smaller houses and to provide at least basic amenities for the new inhabitants, the daily wrote.

This summer, Dan Ťok, Skanska’s general director for the Czech Republic and Slovakia, arrived in Devín with a promise that the company would soon file a compromise proposal.

“So far, the only answer was an e-mail that stated quite sharply that the invest

According to Za krajší Devín, the symbolic funeral was organised when Devín authorities learned that Skanska was seeking construction licences to begin the project in its original form. The licences were to be issued by the Regional Construction Office in Bratislava, which took away Devín’s right to decide on the development.

But Skanska spokesperson Madgaléna Dobišová said a compromise proposal has been drafted.

“The visualisation and new alternatives for villas are prepared,” Dobišová said. “We are waiting for the mayor to propose how we will communicate about them and the date we will meet.”

However, Skanska will not make the compromise proposal public, she said.