Ducks raise money for the tower

NEARLY 300 plastic yellow ducks floated down the Danube on September 13 from the Nový Most bridge to the Starý Most bridge as part of a fundraiser for the reconstruction of a Gothic tower in the Janko Kráľ Park in Bratislava. Thus, the Slovak capital has joined yet another group of international cities: an inventive one which holds duck races as charity fundraisers. 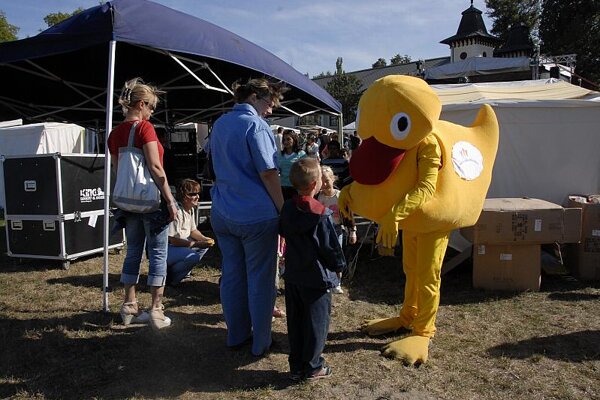 NEARLY 300 plastic yellow ducks floated down the Danube on September 13 from the Nový Most bridge to the Starý Most bridge as part of a fundraiser for the reconstruction of a Gothic tower in the Janko Kráľ Park in Bratislava. Thus, the Slovak capital has joined yet another group of international cities: an inventive one which holds duck races as charity fundraisers.

“The attendance was not a surprise for us,” Barbora Paulenová, programme coordinator of the Community Foundation of Bratislava (KNB), which organised the race, told The Slovak Spectator. “We planned that there would be 300 ducks competing because this was the first year of this event in Slovakia.”

“We were inspired by similar activities in London, New York and Singapore,” Daniela Danihelová from KNB told the SITA newswire.

On a beautifully sunny day, the race lasted just over 9 and a half minutes – long enough for the fastest duck to reach the goal. Its proud owner won a one-hour flight in an air-balloon and a dinner for two in a luxurious restaurant.

In total, 265 yellow ducks competed. Private individuals “adopted” 246 of those ducks, contributing Sk200 each towards the reconstruction of the Gothic tower. The business sector also joined in, adopting large ducks for Sk30,000 each. In total, KNB raised almost Sk450,000 with the race alone.

The Community Foundation has added this money to contributions which it has already collected from private individuals and companies. Those who missed the duck race can contribute to the tower reconstruction by text messages sent via the patrons message service.

Costs for the reconstruction of the tower, which at one time was part of the Franciscan Church in Bratislava’s Old Town and is currently a popular place in the park, are estimated at almost Sk4 million.

The duck race was only one point of the rich programme of the Fair of Non-governmental Organisations (NGOs) organised by the Pontis Foundation and held at the Tyršovo Embankment. Additionally, the Community Foundation of Bratislava was only one of 27 non-profitable and non-governmental organisations that presented themselves and their scope of activities at the fair.

“The goal of our events is partnership – a bridge for the public with stories of NGOs and their work, to bridge experience and resources with those that need them,” Lenka Surotchak, the director of the Pontis Foundation told The Slovak Spectator.

“There were more than 3000 people coming to see the activities of the 27 NGOs,” Surotchak told The Slovak Spectator. “They covered a variety of topics and it is important that they had the chance to directly talk to people and answer questions about fair trade, anti-corruption, discrimination, human rights and protection of green areas in Bratislava.”

During the Saturday afternoon of the fair, guests could visit the stands of both well-established and lesser-known NGOs and discuss their activities and projects.

For example, at the People in Peril stand, visitors could taste Afghan bread and women were able to try on a traditional burka such as the women in Afghanistan were obliged to wear during the Taliban’s reign.

The Freedom of Animals exhibit presented their recently-opened shelter in the Polianky area of Bratislava. This organisation had a special ambassador who was very popular amongst the visitors. Karči, an adopted black and white mutt was a shining example how a shelter dog can be intelligent and well-trained.

While strolling around, people not only had the opportunity to buy fair trade products, but also to talk with representatives from the Fair-Play Alliance or Amnesty International Slovakia about situations relevant to Slovakia, such as corruption or human rights.

Homeless people and the most effective way to help them was the main focus of the Proti Prúdu (Against the Current) and Depaul NGOs.

In its third year, the fair, organised by the Pontis Foundation, successfully introduced NGOs and their activities and projects to Bratislava citizens. Two other NGO fairs took place in Banská Bystrica on September 18 and in Prešov on September 19.

“This is a great opportunity for NGOs to be in touch with the people, receive feedback, and learn directly from the audience what is happening in many different fields,” Surotchak told The Slovak Spectator.