From Britain to Bulgaria and beyond: international bagpiping in Slovakia

THE ORAVA Cultural Centre, under the authority of the Žilina Region and the Municipality Office in Oravská Polhora, invited bagpipe players from around the world to take part in the 9th annual International Bagpipe Festival, which took place September 12-14. 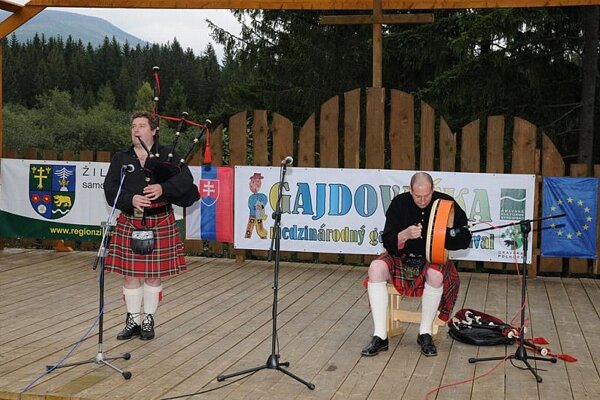 THE ORAVA Cultural Centre, under the authority of the Žilina Region and the Municipality Office in Oravská Polhora, invited bagpipe players from around the world to take part in the 9th annual International Bagpipe Festival, which took place September 12-14.

The participation of the young Japanese Yutaku Bana came as a big surprise. A student of ethno-musicology in Bulgaria, Bana presented himself by playing Bulgarian and Slovak folk songs on the bagpipes.

The festival’s rich programme also included accompanying bagpipe concerts. These successful concerts were held on September 13 at Orava Castle, in an open-air folk museum in Zuberec and in the Polish village of Milowka.

Bagpipe producers met in the Polhora workshop of František Skurčák who is currently the only producer of this ancient instrument in Orava. Mainly young people interested in playing the Croatian bagpipes were taught by the head of the Centre for Traditional Folk Instruments – Stjepan Vjeckovic from Croatia.

The programme, rich in visual content and sounds reminiscent of the bagpipers from Northern Podpoľanie region, attracted many, including Ľubomír Tatarka, Karol Kočík, and Jozef Kostúr, reminding them of their musical predecessors.

The focus of the Gajdovačka, however, was the 8th International Competition of Young Bagpipers. Its aim was to preserve and promote the playing of bagpipes among the youth and preserve the traditional cultural symbols of European regions.