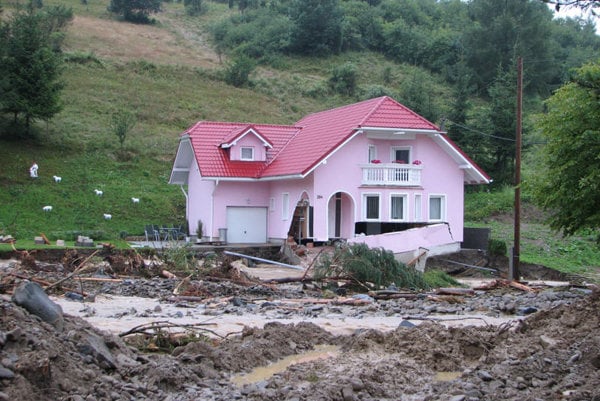 People are becoming more interested in the quality of their property insurance. (Source: SITA)
Font size:A-|A+

Slovak clients have also developed a more mature understanding of their non-life insurance. Providers report clients enquiring not only about whether they are insured, but about the quality of their property insurance. And insurance companies predict that there is probably no further room to decrease the price of mandatory third party liability car insurance, which has the largest share of the non-life insurance market.

“We are getting closer to western countries, where the ratio is 60:40 in favour of life insurance,” said Daniela Michaličová, spokeswoman of insurer Kooperativa. “As the current trend shows, the share in Slovakia is balanced at 50:50, and the market is still recording a mild increase.”

This is due to people becoming more aware that the difference between their current income and income after retirement might be quite large, Michaličová said.

“We suppose that it [the life insurance market] will stabilise at a level comparable to western Europe, which is approximately 7 percent of its premiums to GDP,” said Zoja Kvasňová, process manager at ČSOB Poisťovňa. “This will be in the long term, as this share currently stands at 2 percent.”

An improved living standard will be crucial to whether life insurance coverage increases in the future.

In 2007, the life insurance market in Slovakia grew by 13 percent, which was by about three percentage points lower than in 2006, according to Symsite Research. Life insurance premiums reached Sk28.8 billion (€0.94 billion) last year.

“Life insurance’s growth in the share of total written insurance premiums continued,” the Symsite Research analysis reads. “For the first time, the share reached 50 percent. In 2003, it was 40 percent.”

In terms of the structure of life insurance, classical capital insurance still prevails. However, the demand for a combined capital and investment life insurance, as well as for insurance with guaranteed yields, is growing quickly. The increase in life insurance can also be ascribed to activity by private insurance brokers.

The Symsite Research analysis suggested that the opening of the second pillar of the pension system and the government campaign against pension fund management companies might also have increased the volume of life insurance premiums by inducing the public to search for alternative ways of saving for retirement. (See story on pg 1 for more details.)

Pension reform could also increase public awareness about planning for the future, according to Dohnal.

Life insurance still has room to grow in Slovakia, as the current ratio of life insurance premiums to GDP is very low compared to developed countries. Last year, it reached only 1.6 percent, while in the EU 15 it was 7.3 percent, the Symsite Research stated.

The factors that might slow the growth in life insurance are rising oil, energy and food prices. With the need to spend more on basics, the public might hesitate to put aside money for savings.

Symsite Research expects that this year the pace of growth of life insurance premiums will slow slightly to 12 percent. Next year, the growth will continue at 10 percent.

In its analysis, Česká Poisťovňa – Slovensko reported that the entire non-life insurance market stalled last year. This was caused by a price war in the mandatory third party liability car insurance market that started in 2005.

In 2007, non-life insurance premiums grew by 2 percent year-on-year, while premiums for third party liability insurance decreased by half a percent.

In general, the price of third party liability car insurance probably reached its bottom in 2007 and 2008, according to Česká Poisťovňa - Slovensko.

The reason is that in 2007 insurance companies did not have to create reserves for the deficit of the third party liability car insurance, which the law requires from 2008. When setting prices for 2008, they also did not have to implement new limits for insurance settlements as set by European Union directives.

As far as property insurance, the wind storms in 2007 prompted clients to pay greater attention not only to whether they are insured, but also to how they are insured and against what.

“Gradually, the awareness of the necessity for quality insurance protection and purchasing the insurance at the right moment is increasing,” the insurer wrote in its analysis.

The aggregate volume of non-life insurance premiums reached Sk28.862 billion, while life insurance amounted to Sk28.818 billion in 2007, according to the Slovak Insurance Association, which currently includes 24 insurance companies.