JÁN Slota, chairman of the Slovak National Party (SNS), reached a new low, analysts say, in recent comments directed at Hungary and a member of its government. While delivering a speech in the village of Pavlovce, in the Prešov region, on October 5, Slota compared Hungarian Foreign Affairs Minister Kinga Göncz to Hitler. 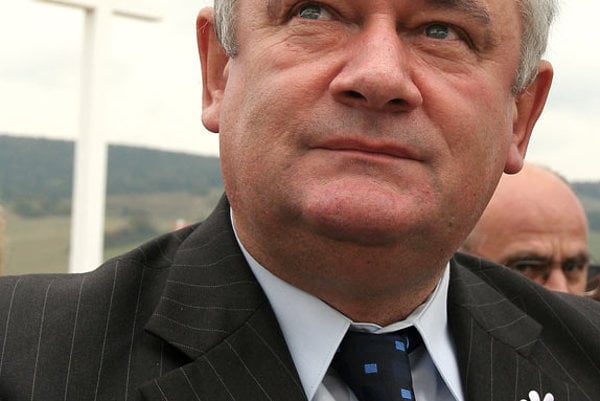 SNS boss Ján Slota during the ceremonial installation of the Lorraine Cross near the village of Pavlovce in eastern Slovakia on October 5. (Source: SITA)
Font size:A-|A+

JÁN Slota, chairman of the Slovak National Party (SNS), reached a new low, analysts say, in recent comments directed at Hungary and a member of its government. While delivering a speech in the village of Pavlovce, in the Prešov region, on October 5, Slota compared Hungarian Foreign Affairs Minister Kinga Göncz to Hitler.

“I can compare her to [Sudeten Nazi leader Konrad] Henlein’s people and that moustachioed man from the pub in Munich, who said the same kind of things as that lady I have already mentioned several times today. Maybe she is already growing a moustache,” he said.

Slota was in Pavlovce to install a Lorraine Cross (one of Slovakia’s national symbols), which he has been doing at various locations around the country. In his fiery address, which was delivered to 200-300 people, he insisted that Slovaks would not allow themselves to be oppressed.

“We will not yield to this enormous pressure that our neighbours from Budapest are applying to us, where this dishevelled lady [Göncz], this poor devil, is. She is threatening us and posing questions to the prime minister when she cannot even reach his heels.”

“We are Slovaks, and no one will dare to erase us from the map of Europe,” he bellowed.
He also launched into a personal attack on Hungarians and their national symbol, the turul, which is a mythical falcon.

“These robbers, murderers, and those who erect these ugly, disgusting turuls, these Hungarian parrots,” he said. “This is our land, this is our native soil, Slovak soil, and we will not give it up.”

When Slota mentioned “threats” and “questions,” he was referring to a meeting that Göncz had called with Slovak Ambassador Juraj Migaš four days earlier.
The topics discussed included a recent controversy over textbooks used by Slovak-Hungarian schoolchildren, the Slovak government’s allocation of European Union funds to Slovak-Hungarian schools, and the uproar over Hungarian Coalition Party (SMK) chairman Pál Csáky’s attendance at the Forum of Carpathian Basin MPs, which Slota has accused of being beholden to Budapest.

“It is evident that in Slovakia, anti-Hungarian statements are used for domestic political goals,” she told Hungarian media on October 6.

Prime Minister Robert Fico distanced himself from Slota’s comments, maintaining that Slota alone bears responsibility for them. But he took pains to add that Göncz had provoked them.
“At the heart of this issue is the ultimatum that Mrs. Minister gave us,” Fico announced at a press conference on October 6.

According to Slovak media, Göncz told Ambassador Migaš that if the Slovak government did not address her concerns in a fair and diplomatic spirit, she would seek resolution at European Union institutions.

“My answer is a categorical ‘no,’” Fico said at the press conference. “We will not succumb to an ultimatum. We will not allow anybody to pressure us by expanding Hungarianism to the detriment of Slovak interests.”

Göncz has rejected Fico's characterisation of her statements. In an interview with Hungarian media, she attributed the personal attacks against her to Slovakia’s need for a common enemy.

“We know that identifying a common enemy always gathers support for a certain political group, and we see that this is exactly what is happening there [in Slovakia] now,” Göncz said, as quoted by the Pravda daily on October 7.

Instead of listing geographical names side–by–side in Slovak and Hungarian, the books list them only in Slovak and places the Hungarian names in a glossary in the back.

The disagreement over the books escalated on October 8, when Hungarian schools started returning them to the Education Ministry.

But Education Minister Ján Mikolaj, an SNS nominee, told Rádio Express that the books satisfy the requirements for bilingual texts.

Fico also defended the textbooks, insisting that the government's only interest is in seeing that everybody speaks Slovak well.

He also rationalised the level of European Union funds that his government allocates for schools in southern Slovakia.

Grigorij Mesežnikov, president of the Institute for Public Affairs think-tank, called Slota’s statements “monstrous,” adding that Slota had long ago crossed the line of decency.

“To compare a politician from a democratic country to Hitler is a deliberate effort to attack her personally,” he told The Slovak Spectator. “Everyone must clearly see that this analogy is false.”

“It makes us out to be some barbaric country whose leaders cannot control themselves,” he said.

Political analyst László Öllős ascribed Slota's comments to fears that he is losing voters to the Movement for a Democratic Slovakia (HZDS) and the Smer party, which have been touting an increasingly nationalist agenda lately.

“Smer, including the prime minister and several other politicians, have been claiming southern Slovakia represents a real threat. And they portray their reactions as nothing more than a response to Hungarian provocation,” Öllős said.

But the politicians from Hungary aren’t provoking, he noted.

“However, Slovakia’s Hungarian Coalition Party (SMK) has made some missteps in its reactions to nationalist statements made by the politicians from the governing coalition,” he concluded.
Marián Leško from the Sme daily provided yet another take on the situation.

Slota's statements in Pavlovce were the result of more than just the “very good wine with which they welcomed him there,” Leško wrote on October 7. “The SNS chairman is drunk with the feeling that he has become the avant-garde of the governing coalition, as its most important figures behave just like him.”