IN A LAST-MINUTE vote the cabinet of Prime Minister Robert Fico has approved the draft state budget. By law, a draft had to be approved by October 15; it now goes to a vote in parliament. The budget - which assumes revenues of €13.222 billion (Sk398 billion), expenditure of €14.109 billion (Sk425 billion) and hence a deficit of €886.7 million (Sk26.7 billion) - sailed through cabinet without any major struggles, puzzling both the observers and the political opposition. It would leave the general government deficit at 1.7 percent of gross domestic product (GDP). 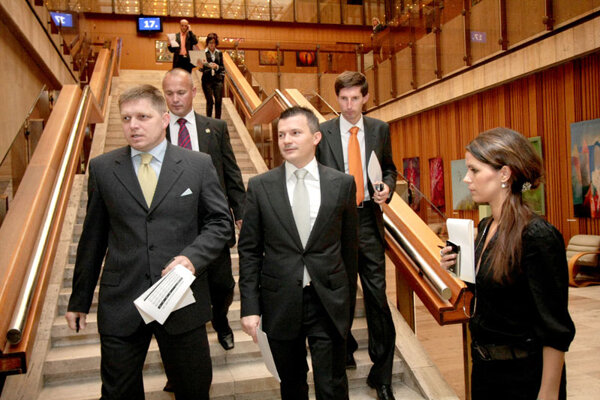 IN A LAST-MINUTE vote the cabinet of Prime Minister Robert Fico has approved the draft state budget. By law, a draft had to be approved by October 15; it now goes to a vote in parliament. The budget - which assumes revenues of €13.222 billion (Sk398 billion), expenditure of €14.109 billion (Sk425 billion) and hence a deficit of €886.7 million (Sk26.7 billion) - sailed through cabinet without any major struggles, puzzling both the observers and the political opposition. It would leave the general government deficit at 1.7 percent of gross domestic product (GDP).

Prime Minister Robert Fico called the proposal for 2009 “the most socially oriented budget in Slovakia’s history”.

Regardless of the prime minister’s choice of adjective, this will be Slovakia’s first budget as a member of the eurozone. After January 1, 2009, when Slovakia adopts the euro, responsibility for monetary policy will shift from the National Bank of Slovakia to the European Central Bank, and government fiscal policy will become the government’s most important tool for controlling inflation in Slovakia.

Parliament is expected to discuss the state budget in December, with observers expecting ministries to be seeking bigger slices than their present allocation from the Finance Ministry. The cabinet has already modified the draft budget submitted by the Finance Ministry in mid-August, which at the time one ministry called a “just a bad joke, really”.

The version that the cabinet approved appeared briefly on the ministry’s website on October 13, only to be removed minutes later.

The media and market watchers, not to mention the opposition, were intrigued about the additional €582.4 million which had been added to ministry budgets in just two months.

Where will the extra money come from?

Finance Minister Ján Počiatek has not given any specific answer to where the extra spending has come from, saying only that it is made up of different components and updates.

According to SITA, the prime minister’s only reference to a potential source of extra cash is that it could come from the dividends paid out by companies in which the state holds an equity stake.

However, the media and market watchers speculated that the government is also counting on funds from the second, so-called capitalisation, pillar of the pension system, where people save for their old-age pensions through private pension fund management companies.


The Fico government opened up the second pillar earlier this year, allowing about 1.5 million clients to decide if they wanted to stay in it or return to the pay-as-you go system administered by the state.

The pillar was open from January 1 to June 30, but the government has since decided that it wants to reopen it for an additional more than seven months, citing the spreading global financial crisis as a reason for the move.

“The government would be eating up money saved for pensions,” a former state secretary of the Finance Ministry, Vladimír Tvaroška, told the daily Sme. “If [the government] does not get money from the second pillar, it will not cut the public finance deficit but, on the contrary, will inflate it.”

Tvaroška also said that there is a real risk that fewer people than the 150,000 the government appears to be counting on would leave the second pillar and that the budget deficit would therefore end up higher than the projected 1.7 percent of the GDP.

However, Fico denied that the Cabinet had decided to open the second pillar in order to tap more finances for the state budget.

“We are not opening the second pillar because we need money for the state budget, but because we consider this product the most endangered in the given circumstances,” he said, as quoted by SITA.

What about GDP growth revisions?

Radovan Ďurana of the Institute of Economic and Social Analyses (INESS) said that the most problematic part of the budget was the total volume of expenditure, which is slated to grow faster than either inflation or GDP. Expenditure will grow by almost 12 percent or Sk45 billion (€1.494 billion).

The main change comes from an increase in non-tax revenues, which are less closely connected to GDP growth, Ďurana told The Slovak Spectator.

“Tax incomes have been increased by less than Sk2 billion, linked to a higher Finance Ministry estimate of income tax revenue from corporate entities,” Ďurana said.

Another question is whether the budget produced by the Fico team sufficiently reflects the global financial crisis and its potential impact on the country’s economy.

The budget’s economic growth estimate remains unchanged at 6.5 percent for 2009.

“The financial crisis will lead to a slowdown in the economies of the European Union, which is the main export destination for Slovak producers,” Ďurana said. "The eventual drop in their production could be reflected in a slowdown of GDP growth, average wages and domestic consumption. This is why slower growth in tax revenues can be expected; at the moment, we believe, the estimates of these are optimistic.”

The result could be a higher-than-expected state budget deficit, Ďurana said, adding that the government should be anticipating such an outcome and therefore seeking a balanced budget, or even a surplus.

“Unfortunately, it is not doing that,” he added.

Observers expect budget talks in parliament might indeed be noisy, with the strongest opposition party, the Slovak Democratic and Christian Union (SDKÚ), already suggesting that it will not support the draft budget in the form the cabinet has approved it.

Former finance minister and deputy chairman of the SDKÚ Ivan Mikloš said that the budget’s biggest problem is that its priorities are wrong .

“There is insufficient support for the middle class and families with children,” Mikloš told The Slovak Spectator. “However, the budget would allow room for this because in 2009 the government will have Sk130 billion more than the [Dzurinda] government had in 2006.”

According to Mikloš, another major problem is that the government has inflated budget revenue without changing the forecast for GDP growth.

“Everyone around, all the surrounding countries are revising their growth forecasts; in Slovakia for example the commercial banks have been modifying their predictions by 2 to 3 percent,” Mikloš said. “The government has indeed inflated revenue and inflated expenditure.”

According to Mikloš, the deficit could very easily turn out to be much higher than that approved in the state budget.

“First of all they should have made the growth estimate more realistic,” Mikloš said. “If growth does slow, incomes would drop as well and expenditures would climb.”

Mikloš also objected to the way the budget was approved calling it “scandalous” and “undignified” and suggesting that the first and only time when the government discussed it was in fact the same day on which it had to submit it to parliament. He also criticised the fact that the draft was on the internet for only five minutes before being withdrawn.

“Decisions were made not in the cabinet and not at the ministries but by the ruling coalition,” he added.

By October 14, following a meeting of the ruling coalition council, a forum where the leaders of its three parties - Smer, the Slovak National Party (SNS) and the Movement for a Democratic Slovakia (HZDS) - discuss the most crucial issues of running the country, Fico knew that the budget vote in cabinet would face no major hurdles. The draft budget should be passed smoothly, and without any significant discussion, he told the media after the meeting.