CARMAKERS have been part of almost every investment success story here and have earned Slovakia the nickname “the Detroit of the East”. But their fellows world-wide have been among the first to be affected by the global financial crisis. Slovakia, which is home to three major car manufacturing plants, is now carefully watching the automotive sector since any major blow to these companies could mean serious harm for more than just the regions in which they are based. 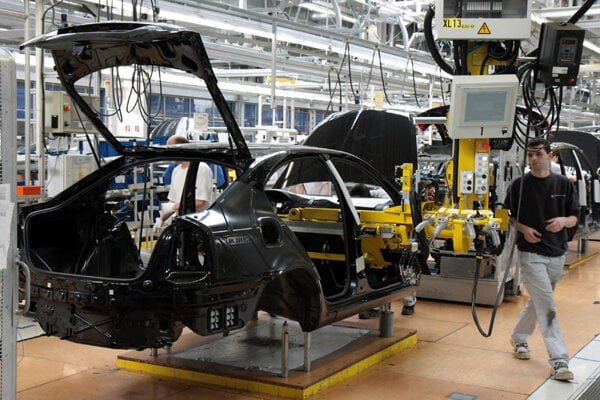 A drop in demand for cars could have a serious effect on Slovakia. (Source: SITA)
Font size:A-|A+

CARMAKERS have been part of almost every investment success story here and have earned Slovakia the nickname “the Detroit of the East”. But their fellows world-wide have been among the first to be affected by the global financial crisis. Slovakia, which is home to three major car manufacturing plants, is now carefully watching the automotive sector since any major blow to these companies could mean serious harm for more than just the regions in which they are based.

Though they are couched in cautious language, statements from PSA Peugeot Citroen, Kia and Volkswagen still say that there are no major problems looming on the horizon so far and that there remain some world markets in which prospects for car sales are not so gloomy. In the neighbouring Czech Republic, however, complications have already emerged and some carmakers have announced layoffs.

Observers say that several export-oriented sectors, including carmaking, will feel the crisis sooner or later. The carmaking industry also faces some other tough challenges, such as the need to switch to low-emission vehicles, something which will demand massive investment.

The European Automobile Manufacturers Association (ACEA) said that the deepening global slowdown, along with gloomy growth prospects and tumbling consumer confidence, is starting to take a toll on European automakers. Carmakers, according to the ACEA, need to sustain high levels of investment to support the market transition to low-emission vehicles but may lack sufficiently strong consumer demand and political support.

“The fall-out of the financial crisis is hitting auto-manufacturers hard, as the credit crunch makes it more difficult for the sector to finance daily operations and, at the same time, also weakens demand for new cars,” the ACEA wrote on its official website.

According to the ACEA, car sales in central and eastern European countries could continue to grow for longer due to a larger number of first-time car buyers and higher economic growth. However, these markets will not be immune to the crisis.

Car manufacturers have asked the EU to consider various measures and called on governments to respond to the crisis by stimulating the economy, relieving the credit crunch and restoring consumer confidence.

Czech automotive firms will have to layoff 2,500 – 3,000 people by the end of the year, mostly agency workers but also direct employees, said the president of the Czech Automotive Industry Association, Martin Jahn, as quoted by the Sme daily. According to Jahn, the layoffs are more a matter for suppliers than for car producers.

In Slovakia, car sales are still on the increase

This year in September, 7,098 new passenger cars and small commercial vehicles of up to 3.5 tons were registered in Slovakia, representing a steep, 23.98 percent, year-on-year increase, Mária Nováková of the Automotive Industry Association (ZAP) said in a statement. Since January, 71,643 cars have been registered, up 20.81 percent year-on-year, the ZAP said.

However, carmakers admit that the sector cannot remain immune to the financial turmoil and car producers will have to adjust their programmes to the changing business landscape.

“The automotive market in Europe has been experiencing an actual drop in demand,” Peter Švec, communications director at PSA Peugeot Citroen Slovakia told The Slovak Spectator. “All the big players in the automotive industry must therefore adjust their production programmes to the emerging situation.”

However, Švec said that the decline does not influence every market or every product segment in the same way.

“Demand for cars in France, which is a decisive market for PSA group actually grew in September 2008, by 8.2 percent,” Švec said. “Cumulatively, over the first nine months in 2008, year-on-year, sales in France were 3.4 percent higher. In Germany, over the same period, sales increased by 1.6 percent.”

Švec also said that the so-called B category, small cars with low CO2 emissions, is less affected by the fall in demand. In this context, Švec believes that the PSA group has a competitive advantage. Its production centre in Trnava is one of the four within the PSA group focused on the production of B-category cars.

However, Švec added that the production programme of the company up to the end of this year has been adjusted to the market situation in such a way that employment and wages will not be affected.

The company will stop production over the Christmas holidays, as during previous years, he said.

Dušan Dvořák, spokesman for Kia Motors Slovakia told The Slovak Spectator that the current crisis has not yet affected production at the company’s Žilina plant.

“Our main product, the Kia cee’d car, falls into the lower middle category, which in Europe is the largest segment,” Dvořák said. “[Our] production plan is prepared on a monthly basis, thus changes might appear in November or December. Plans for next year have not yet been confirmed.”

According to Dvořák, the company is not planning preventive measures and that production is flexible and can be adjusted within a short space of time to different conditions. Kia says it is not planning layoffs. It currently employs 2,740 people.

“The impact of the crisis on the automotive sector cannot be fully foreseen, but it is already evident that carmakers are reacting to a drop in demand for certain models from their product lines,” Dvořák added.

According to Sme, most of the Volkswagen’s local employees already work only morning shifts, and night shifts have been cancelled. Some employees are being required to take vacations, or are receiving only 75 percent of their normal wages, Sme wrote.

While the company has remained tight-lipped about the current situation, the Aktualne.sk website reported that Volkswagen plans to stop production for several weeks, between December 12 and January 22, 2009, in contrast to original plans for a two-week company holiday over Christmas.

Other industries start to feel the heat

Industry representatives say that the export-oriented sectors of the economy producing consumer goods will also feel the effects of the crisis. However, for some it might open up new challenges and commercial opportunities, business representatives agree.

Martin Čajko of the Slovak Industry Association said that financing for firms, both in the short-term and through investments, is becoming more expensive and is affecting industry.

More expensive financing is one thing, but on the other hand when a firm has planned investment it is important for it to know whether resources may dry up even if it can demonstrate ongoing financial stability, Čajko told The Slovak Spectator.

“Export-oriented sectors of the economy producing consumer-type goods, for example carmakers and electrical goods, are in danger,” Čajko said. “The overall decrease in demand for these goods is leading to a gradual reduction in production. However, I do not see this year that negatively because losses are not very extensive.”

If the current situation prevails next year, there might be a much graver scenario, he added.

As for the positives which the crisis might bring to Slovakia, Čajko said that one sector which might benefit is the publishing industry.

“The key market is Germany, and the impact of the crisis might result in German publishers wanting to move a larger part of their production, which they have so far kept at home, to central Europe, where they can still benefit from cheaper labour,” said Čajko. “This encourages me to say that, for some sectors, the current period might become a period of opportunities.”