Mild bubble maybe, but no catastrophe

ALTHOUGH the current mortgage crisis might tighten the conditions under which mortgages are provided in Slovakia, no dramatic changes or steep growth in prices are expected. As mortgage products are still relatively new in Slovakia, in contrast to the situation in the US, they have been granted only after careful inquiry into the borrower’s ability to pay. Moreover, the overall loan exposure of Slovaks is still very low compared to western countries. 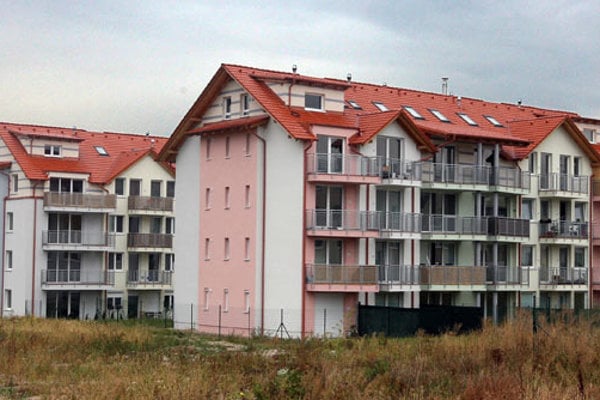 The real estate boom in Slovakia has been fuelled by genuine customer demand, according to analysts. (Source: SME - PAVOL FUNTÁL)
Font size:A-|A+

ALTHOUGH the current mortgage crisis might tighten the conditions under which mortgages are provided in Slovakia, no dramatic changes or steep growth in prices are expected. As mortgage products are still relatively new in Slovakia, in contrast to the situation in the US, they have been granted only after careful inquiry into the borrower’s ability to pay. Moreover, the overall loan exposure of Slovaks is still very low compared to western countries.

Although banks suggest that the real estate market in Slovakia might see continued stagnation or a drop in prices, they agree that it will be far from the situation in the US.

“It is possible that the banks will change their assessment processes for mortgage applications,” said Štefan Frimmer, the spokesman for Slovenská Sporiteľňa, the largest bank in Slovakia. “For clients this means that the banks will require more data from them.”

However, he emphasised that it will also provide a measure of protection to the clients themselves, as they too will have to thoroughly consider their ability to pay back the loan.

On the other hand, ČSOB bank does not plan to change its loan policy. The bank is still concentrating on simplifying its mortgage products, said Tereza Molnár Copláková, a spokeswoman for ČSOB.

However, she added that the bank checks each mortgage applicant’s loan exposure carefully. “We assess each client individually to evaluate his ability to fulfil his commitments and we take into consideration information from both internal and external sources,” Molnár Copláková said.

The key interest rates in the eurozone recently decreased. But how mortgage prices will develop in Slovakia will mainly depend on the inter-bank market, said Marek Gábriš, an analyst with ČSOB.

“The fluctuations in market interest rates on which the prices of mortgages are based, mainly long-term ones, are key,” Gábriš said. “Currently, these have a tendency to decrease.”

On the other hand, the margins which banks add to inter-bank interest rates have a tendency to grow in an uncertain environment.

However, Gábriš believes that the situation in Slovakia is different from the one in the US market. The reasons stem from different market regulations and fundamentals.

Although it is possible that a mild bubble was created in the Slovak real estate market, the market still shows favourable economic development, he said, due mainly to economic growth, job creation, growth of real wages, and better accessibility to loans and their low prices. Demographics were another factor – the large generation born in the 1970s was in need of housing.

“In general, I believe the correction [of prices in the real estate market] is natural and in no case will it be as sinister as in the US,” Gábriš said.

In Slovakia, the real estate boom was fuelled by an objective demand for real estate, Vladimír Baláž from Sevisbrokers Finance told the Sme daily

In several years’ time the situation might change as less populous generations enter the labour market, which will decrease housing demand, Baláž said.

Moreover, the astronomically high prices of some real estate in Slovakia suggests it was built with speculative intentions.

“No catastrophe threatens the Slovak real estate market,” Baláž told Sme. “Instead, the market will be influenced by irrational concerns about euro adoption. Later, the situation will return to normal.”

In developed countries, the ratio of mortgage volume to GDP ranges from 30 to 80 percent. n 2007, in Slovakia the equivalent figure stood at around 11 percent of GDP.

Both numbers are far below European standards, according to Sme.