Justice Minister Štefan Harabin swore at an opposition MP and taunted him about his Jewish ancestors in a parliamentary outburst that was censured even by his coalition partners. 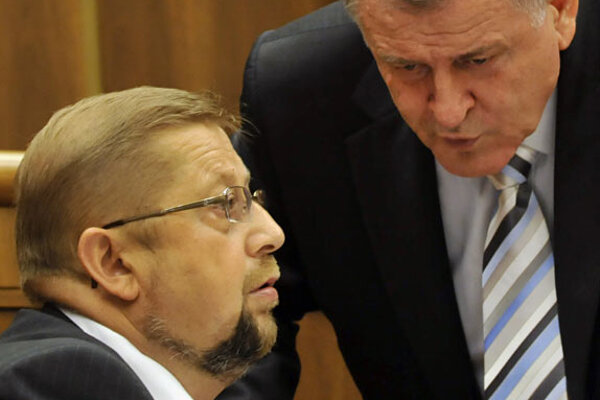 Justice Minister Štefan Harabin swore at an opposition MP and taunted him about his Jewish ancestors in a parliamentary outburst that was censured even by his coalition partners.

“You’re going to jail, you asshole,” Harabin said to former justice minister Daniel Lipšic as the latter left the speaker’s lectern after denouncing Harabin (pictured, above at left) over his alleged ties to an Albanian drug dealer.

Harabin at first denied making the remark, but was caught in the lie by a TV mike.
The incident occurred on September 4, during a debate on an opposition proposal to oust Harabin as justice minister. The proposal was submitted by Lipšic, who has accused Harabin of being on friendly terms with Baki Sadiki, the alleged boss of a drug gang that operates in Slovakia.

As evidence against Harabin, Lipšic read from the transcript of a 1994 phone call between Harabin and Sadiki. Lipšic argued that their jovial exchanges and use of first names proved the closeness of the relationship between them. Attorney General Dobroslav Trnka has confirmed that the transcript was genuine and was part of a case file.

Moreover, Lipšic said he also had a draft letter from the Attorney General’s Office asking Harabin, who was a Supreme Court justice at the time, to recuse himself from cases concerning Sadiki.

“Do we want the government to include a minister who is friends with the head of an Albanian drug mafia?” Lipšic asked.

“You remind me of some Nazis who had Jewish ancestry and yet were able to kill innocent children, women, old people in concentration camps, just to prove their loyalty to fascism,” Harabin responded.

“What is the difference between Goebbels and Lipšic?” he continued.

The references to Lipšic’s Jewish ancestry were continued by MP Vladimír Mečiar, the head of Harabin’s HZDS party, who asked Lipšic whether one of his ancestors had the surname Lipstein.
Harabin and Mečiar were immediately criticized for their comments, but Mečiar denied they were anti-Semitic.

“If Lipšic is the proponent of a new ideology, or maybe even crooked views, why can’t we look to see if there is a basis for this in his genes?” he asked.

After the no-confidence motion failed, Harabin admitted to journalists that he had used profanity and threatened Lipšic. “I lost my temper,” he explained.

But following an outcry against the remarks, some of Harabin’s coalition colleagues were not willing to let the matter rest. “It’s inappropriate for a politician to make comments in parliament that smack of anti-Semitism,” said PM Robert Fico. “If someone deliberately and systematically states such opinions, he doesn’t belong in government.”