Pezinok gets dumped on

A massive garbage dump to be located near the center of the town of Pezinok has been given final approval by the state authorities, leaving a court case as the only legal option for opponents of the project. 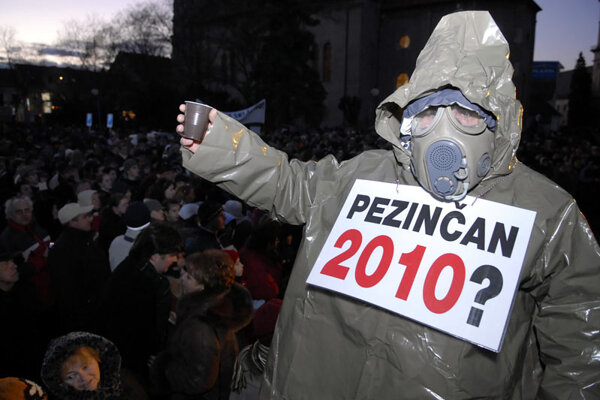 A massive garbage dump to be located near the center of the town of Pezinok has been given final approval by the state authorities, leaving a court case as the only legal option for opponents of the project.

The Environmental Inspectorate rejected the appeals of the town of Pezinok and local activists on August 18. The license to build the dump, which violates Pezinok’s current master zoning plan, was originally issued by the Regional Construction Office in Bratislava, which is led by Ján Man, Jr. – the same man who owns the land where the proposed dump will be built. Man was nominated to his post by the main ruling coalition party, Smer.

In defense of its decision, the Environmental Inspectorate said “The inspectorate cannot examine the decisions of other public administration bodies”. Prime Minister Robert Fico, meanwhile, said he suspected that the opponents of the dump were trying to smear his Smer party.

Civic activists as well as Pezinok’s mayor claim that the dump will be located too close to the town center, at only 400 meters away, and will pollute the air. But Marián Kočner, a controversial Bratislava businessman who represents Westminster Brothers, the company which has now started building the dump, says his company is mainly interested in profiting from the scheme. He projected that the dump, which will take 60,000 to 80,000 tons of garbage from Bratislava a year, could generate annual profits of Sk120 million to Sk150 million.

Kočner’s fortunes were considerably improved in June when Attorney General Dobroslav Trnka issued a seven-page decision saying that the Regional Construction Office had broken no laws in issuing the building permit. Kočner’s brother-in-law, Juraj Bartošek, also works as a prosecutor at the Attorney General’s Office.