The headquarters of the BEZ Group transformers producer in Bratislava could use more than just a lick of paint. The executive parking lot is a patchwork of cracked asphalt, while the main office building, a stodgy Communist low-rise on the outskirts of the Slovak capital, advertises space for rent. Inside, the furniture and fittings date back to the 1970s. 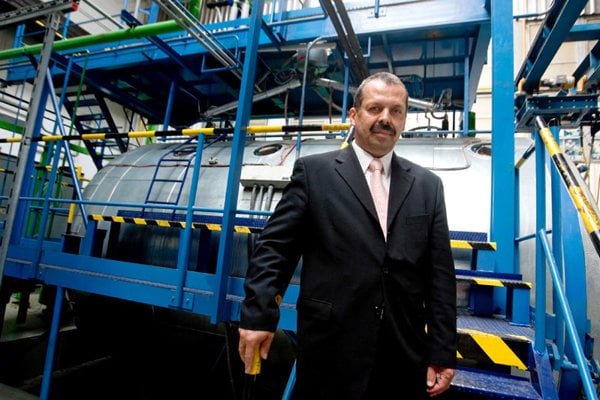 The headquarters of the BEZ Group transformers producer in Bratislava could use more than just a lick of paint. The executive parking lot is a patchwork of cracked asphalt, while the main office building, a stodgy Communist low-rise on the outskirts of the Slovak capital, advertises space for rent. Inside, the furniture and fittings date back to the 1970s.

Not what you might expect from a fast-growing, export-based company that saw sales turnover jump 55% last year to almost 57 million euros. But for board chairman Juraj Šmatlík, modesty is a cardinal corporate virtue.

“Look at my office, look at the furniture in this room,” he says, patting the olive-green nap on a boardroom chair. “All originals from the time of Communism. A lot of firms go out and buy new carpets as soon as they open up, but it’s better to be humble and invest all your assets in your future.”

Šmatlík and his Slovak business partners bought BEZ for Sk230 million (then about $6 million) back in 1996 during Slovakia’s wild privatization era, when many new owners were only interested in making a quick buck. “A lot of them figured that when they got their hands on a factory the first thing to do was suck all the money out of it, sell the assets and go buy a yacht. But my dream was to take a Communist dinosaur that was stuck in its tracks and turn it into a firm that could compete on foreign markets.”

At the time Šmatlík bought it, the factory was only operating four days a week, having lost most of its former customers with the breakup of the Eastern Bloc and then Czechoslovakia in 1993. The new owners cut the workforce from 650 to 230, and opened offices in the Czech Republic and Russia to recover the firm’s traditional markets.

Apart from its Czech and Russian clientele, BEZ now also supplies European energy giants such as Germany’s E.ON and RWE, while industrial clients include VW and Siemens; almost 90 percent of the Bratislava plant’s output is exported. The firm is benefiting from renewed investment in electricity grids worldwide due to high oil prices, a demand it is positioned to take advantage of following its 2004 acquisition of Skoda Plzen’s former transformer division, ETD Transformátory.

ETD makes larger power transformers that are typically used in power stations (including nuclear facilities in the Czech and Slovak republics), while BEZ Group’s flagship company, BEZ Transformátory, makes distribution transformers, smaller units that are usually the last in the line of supply to homes and factories.

The ETD acquisition was the key to winning a watershed 6.5 million euro contract in 2005 from MTU Friedrichshafen, part of the Daimler Chrysler Group. “If we hadn’t bought the Škoda Plzen division, neither company would have got that contract,” Šmatlík says. “It was a real breakthrough, and allowed us subsequently to take big steps forward. We can now win other customers like MTU because we offer a whole portfolio.”

Paul Greeman, an investment banking specialist who has been based in Slovakia since 1991, believes BEZ is reaping the benefits of the foresight it showed in the ETD deal. “They’ve put together and executed a long-term strategy of anticipating what is going to happen in the market and positioning themselves for it,” he argues. “They haven’t gone for the easy money and cashed out, but instead made some strong capital investments and built themselves into a regional winner.”

Because transformers are so widely used – in gas stations, shopping malls and factories – BEZ’s fortunes have risen and fallen with the health of the Slovak economy. The lean years of 1999 to 2000, when the country sobered up from the fiscal folly of the Vladimír Mečiar government, left the factory close to bankruptcy, and saw Šmatlík doing a lot of fast talking to stave off his creditors. “I managed to convince the banks that it was unthinkable for a factory with a century of tradition not to produce a single transformer, and that we could learn to make transformers efficiently,” he recalls.

Likewise, Slovakia’s successes have buoyed BEZ as well. Following the country’s EU entry in May 2004, European clients who had previously spurned non-Union products came knocking. “When we approached the Austrian power company EVN in 1997, they wouldn’t even talk to us. But in 2004, they came here themselves and expressed interest in our products. They told us that while we were outside the borders of the EU, we were not reliable partners for them. Today we supply three Austrian energy companies.”

BEZ is one of the only transformer producers in Europe, apart from the partly state-owned Koncar of Croatia, that is not part of a multinational group. Since almost taking on the Belgian firm Pauwels as a foreign investor in 2000 – the deal fell through because the Belgians wanted a dominant role – BEZ has made do with its own resources. Šmatlík does not conceal his satisfaction that Pauwels later hit a bad patch and was bought out by the Indian firm Crompton Greaves in 2005.

“Everyone was afraid that after we entered the EU, Slovak firms without foreign capital would not be able to compete. For us it was the exact opposite – joining the EU gave us access to new markets and new customers like RWE and E.ON.”

So is it finally time for some new furniture? Not yet. “The entire business success of the Anglo-Saxon culture is based on the principle of deferred gratification,” says Šmatlík. “We did the same thing, and we’re still doing it.”