Preserving what remains of a vanishing past

As an employee of the BBC she traveled the world, meeting dozens of people who today hold important positions. Her Portobello production company helped to make the Oscar-winning film Kolja, as well as others better known in Slovakia such as The Life and Unusual Adventures of Private Ivan Čonkin (Život a neobyčajné dobrodružstvá vojaka Ivana Čonkina) and Dark Blue World (Tmavomodrý svet). Katya Krausová emigrated from Czechoslovakia to London in 1968 at the age of 18, following the occupation of her country by Warsaw Pact troops. Today, along with photographer Yuri Dojc, she is searching Slovakia for clues as to what became of people who survived the Holocaust in this country, as well as information about those who perished. About what is becoming of the world of Slovak Jewry. 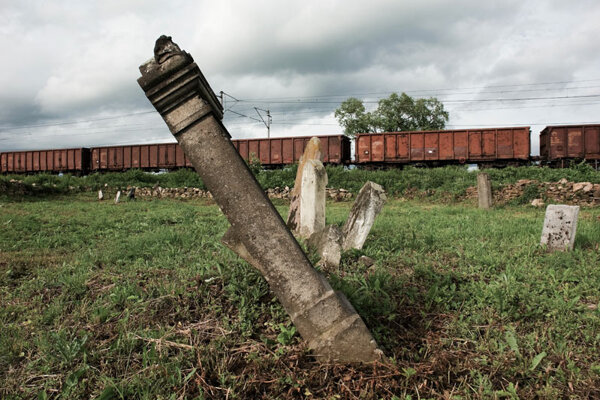 As an employee of the BBC she traveled the world, meeting dozens of people who today hold important positions. Her Portobello production company helped to make the Oscar-winning film Kolja, as well as others better known in Slovakia such as The Life and Unusual Adventures of Private Ivan Čonkin (Život a neobyčajné dobrodružstvá vojaka Ivana Čonkina) and Dark Blue World (Tmavomodrý svet).

Katya Krausová emigrated from Czechoslovakia to London in 1968 at the age of 18, following the occupation of her country by Warsaw Pact troops. Today, along with photographer Yuri Dojc, she is searching Slovakia for clues as to what became of people who survived the Holocaust in this country, as well as information about those who perished. About what is becoming of the world of Slovak Jewry.

Dojc started out by making 150 images of Holocaust survivors. Krausová says the first time she saw them, she wept – and then decided to get their stories on film. She convinced Dojc to make a documentary with her.

However, by the time they set out to start filming, only 30 of the original 150 people were still living. Dojc and Krausová, together with cameraman Richard Krivda, thus started looking for new people and new stories. So far they have filmed 36 people, half of whom have since died.

Dojc and Krausová are still working on the project, which they dubbed Hanishar – a Hebrew word meaning “that which remains”.

“People are happy when we arrive,” said Krausová. “Even in the most distant village in the east of Slovakia people tell us, ‘We so wanted to tell everything to someone’.”

Dojc captures atmospheric shots – the misty outlines of headstones in abandoned Jewish cemeteries, the yellowing pages of books in disintegrating synagogues, even the dusty, worm-eaten benches and schoolbags of a half-demolished Jewish school on Slovakia’s eastern frontier with Ukraine. In the school they found not only items that once belonged to Jewish students, but also signs extolling Slovakia’s wartime fascist state. The same state that sent 70,000 of its Jewish citizens to their deaths in concentration camps.

They began filming the story of Ružena Vajnorská. Just before they started, Vajnorská began applying blue eyeshadow without a mirror. When Krausová asked her if she didn’t need a mirror, Vajnorská said: “Dearie, what would I need that for? I’ve been putting makeup on for 30 years. I know by now where the shadows belong.”

Vajnorská then started by telling the filmmakers that she had been made a ‘capo’, or boss among the prisoners at Auschwitz.

During filming, Krausová even learned new things about her own family. She went to the border between Slovakia and Moravia to film the story of Katarína Brünsteinová, who in 1945 had survived the march of death from Auschwitz. Brünsteinová recalled that the Nazis forced the inmates to walk for days and weeks. They slept at night in the ditches by the road, because American planes were bombing the route they were being forced to take. They had neither water nor food, and were filthy and verminous.

One day Brünsteinová woke up in the ditch and found that the Germans were gone, that the raids had ended. That the war was over.

“I asked her if they had celebrated the end of the war,” Krausová told Spex. “She said there was nothing to celebrate because they were more dead than alive.”

Brünsteinová lay back down in the ditch and slept. When she woke up, she heard a stranger talking in Slovak, even though they were not on Slovak territory. A young man was talking about how they would build a new Czechoslovakia. She was surprised that anyone in their situation was thinking about the future. It emerged that this Slovak man was one of the survivors of the death march.

Brünsteinová and the Slovak joined a group of former inmates traveling to the north of Germany, and then home. Near the end of their long journey, Brünsteinová realized that although she was flea-bitten and more dead than alive, she was still only 23, and she was in love with the young Slovak.

“It was to be such a life,” Krausová said. “I asked her if she had ended up marrying the Slovak, but she said they had lost contact.”

Brünsteinová waited for her man, looked for him, but couldn’t find him. She met him again, years later, when both of them were already married to other people. Krausová asked the man’s name – and discovered that Brünsteinová the whole time had been talking about Krausová’s father. The two of them froze.

“Then Mrs. Brünsteinová turned to me and said – ‘Come here, Krauska, and give me a hug. I could have been your mum.’”

Krausová attended elementary school in Bratislava on Čapková Street. In the second half of the 1950s, students from the school were frequently summoned to welcome official state and government delegations from other countries.

In 1958, at the age of eight, Krausová was called on to greet the General Secretary of the Communist Party of Bulgaria, Todor Zhivkov, in person, and give him a flower.

“He went to give me a kiss, and I turned my face away,” she recalled.

At the time, Krausová’s father was a political prisoner working in the uranium mines at Jáchymov in the Czech lands, where prisoners endured the hardest and most dangerous conditions in the Communist prison system. Martin Kraus had been sentenced to life in the mid-1950s in connection with the infamous trial of Rudolf Slánský. In 1951, Slánský, a top party official, had been jailed for political reasons and then sentenced in a show trial; 11 of the defendants were executed, and 3 were jailed for life, although they were later released. All confessed to anti-state activities, but the trial was openly anti-Semitic in tone. Most of those executed were Jews. Martin Kraus was given life along with Oskar Langer.

“It was a strange feeling to be getting a kiss from Zhivkov at a time when my father was in the mines,” Krausová said. He was released in the 1960s.

As a student she was sent several times to the Bratislava castle to attend official celebrations of top politicians of the 1950s. She was chosen for her good marks, and for the fact she had the required working class background, as her father was a miner. It made no difference that he was a miner perforce as a result of political persecution.

In 1966, Krausová started writing back and forth with an English girl, and in 1968 she went to London to stay with the family of the editor of The Observer and a BBC reporter, to be an au pair for their three small children. Martin Kraus became convinced in July 1968 that the Soviets would not sit idly by while Czechoslovakia inched towards democratization. He arranged that if the country was occupied, Krausová would stay in London.

On August 22, at half-past six in the morning, a few hours after Warsaw Pact troops had crossed into Czechoslovakia, the editor of The Observer came into the kitchen in his housecoat, where Krausová (above, with Dojc) was making breakfast, and said: “So your father was right. You are staying.”

They turned on the radio and heard that Czechoslovakia had been occupied. The die was cast, and Krausová remained in England while her parents stayed in Czechoslovakia. She eventually won a scholarship to study at the London School of Economics, while continuing to serve as an au pair for the family.

“I was very lucky, because they were both interesting and very heartwarming people. And the job of taking care of three children kept my mind off other things.” Her situation also gave Krausová the comfort of being part of a family rather than on her own as anonymous emigrant.
“I fell in love with London,” she says today.

After finishing her studies at LSE she went to Oxford to study political science, where for her doctoral thesis she analyzed the roots of the political trials in Eastern Europe in the 1950s.

After graduating she was unable to find work, so she took a job as a waitress. After a few years of serving tables, she applied for a job as a BBC producer. The station chose only 27 candidates out of 20,000 applicants; Krausová was one of the lucky ones.

In her work for the BBC, Krausová traveled the globe. She worked on reports from Japan, and in the early 1980s covered the impact in Germany of a documentary film series on the Holocaust that had been made in the US. The film awoke shock, horror, and rejection, and led to several explosions and unrest. The German station that broadcast the series received 200,000 letters from viewers. Krausová covered the stories of five of the letter writers, Germans who had decided after seeing the series to talk about life in Nazi Germany.

Everyone she met told her that the Holocaust series had been so emotionally powerful because it had been in color. Until then, the German public had seen only black and white documentary footage of emaciated prisoners or their remains. The images in the old footage had not resembled human beings, but in color they looked much more like former neighbors and acquaintances of the viewers.

At the beginning of the 1990s, the British government asked Krausová to work for the Foreign Office in its Central and Eastern Europe department. She accepted, and was sent to Slovakia to teach young people the basics of producing films and TV. For two years she also worked in Kazakhstan, helping to establish the soap opera as a TV form. The soap opera she helped produce helped to educate the entire country, and was mentioned by the Wall Street Journal.

Krausová first saw Dojc’s photographs two years ago at a meeting in Bratislava of people who had emigrated from Slovakia in 1968. Dojc had an exhibit there, and Krausová was deeply touched by his work. On meeting him, she tried to convince him to film the stories of the people whose images he had captured so powerfully. Dojc resisted, but in the end agreed. The two are still collecting stories, and both admit their work has become addictive.

“We still have the feeling that these stories have to be told, that it’s very important. Even though we know that as Jews, we may be closer to the subject matter than others,” says Krausová.

On the other hand, she says, if they pursued Hanishar with the BBC’s famed objectivity, their work would not benefit from the personal interest that the authors so clearly take in their subjects.

“Truly engaging stories are better told from a subjective than an objective point of view,” Krausová says.