Advice from both sides of German politics

SINCE the beginning of the 1990s, several German political foundations have been active in Slovakia, focusing mainly on the development of civic society, pluralist democracy, freedom of speech, or racial and religious tolerance. The Friedrich Ebert Stiftung (FES) has ties to the German social democratic movement and the Konrad Adenauer Stiftung (KAS) is associated with the Christian democratic movement in Germany. 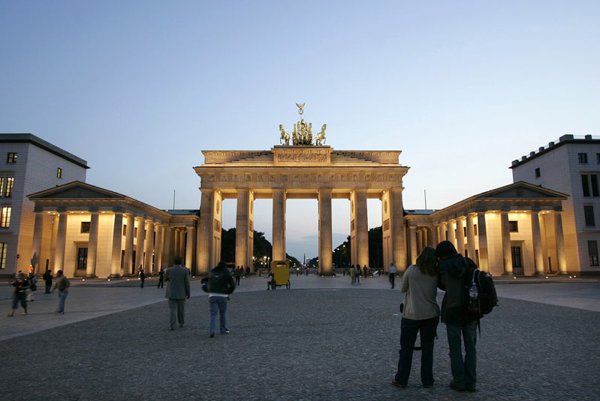 German foundations are helping the development of civil society in over 70 countries. The Brandenburg Gate in Berlin is a symbol of linking the East with the West. (Source: ČTK)
Font size:A-|A+

SINCE the beginning of the 1990s, several German political foundations have been active in Slovakia, focusing mainly on the development of civic society, pluralist democracy, freedom of speech, or racial and religious tolerance. The Friedrich Ebert Stiftung (FES) has ties to the German social democratic movement and the Konrad Adenauer Stiftung (KAS) is associated with the Christian democratic movement in Germany.

Hubert Gehring, head of the KAS representation in Slovakia and the Czech Republic, stressed to The Slovak Spectator that for all German political foundations it was crucial to cooperate with other countries, and not only act within Germany, as Germany currently needed friends.

According to Gehring, the KAS has representation in more than seventy countries. “Our ambition is to show people in countries where we operate that Germans no longer wear Nazi helmets on their heads, and have not done for a long time,” Gehring said. “Today, we are a country rooted in the family of nations, and which wants to have friendly and good relations with all countries worldwide.”

In Slovakia, for both the FES and the KAS, the country’s integration into Euro-Atlantic structures is crucial. “Our number one topic is currently the Lisbon Treaty,” Gehring added. “This is the framework within which Europe will move in the future.”

The issue of cooperation between countries is being re-formulated currently, as new aspects arise in the current financial crisis. “By the end of financial crisis, one question will remain: Do the European countries jointly create the future, or do they want to lose this future individually?” Gehring stressed. He added that countries would have to look for answers in discussions and debates, in which the KAS wanted to help.

The representative of the FES in Slovakia, Michael Petráš, said that his foundation was focused primarily on spreading education and knowledge about foreign and security policy, with a stress on European issues. Their first objective is to clarify the topic of policy towards Europe’s neighbours. But the FES also tries to support the development of democratic and effective unions, to consolidate and strengthen the legal state, and to clarify and strive to develop social policy mainly in the context of the European economic and social model.

The FES has focused on education and discussions within the framework of Slovak security policy and NATO membership. It has organised a round of events on Ukrainian-Slovak relations.


“Currently, research and events focusing on European policy towards its neighbours are taking place,” Petráš added. In this, FES cooperates with a local non-governmental foreign-policy think-tank, the Slovak Foreign Policy Association.

In addition, for nine years the FES has been behind a project called “Social Discussion Forum” which organises monthly seminars on social policy. Apart from this, it supports activities to fight poverty in Slovakia; and it cooperates in the training of Roma teaching assistants, who can then help Roma children integrate into schools.

The FES also supports the education of Roma community activists as well as organising long-term education projects for trade unionists.

The KAS also supports investigation of crimes committed under communism. It has supported several publications by the Nation’s Memory Institute (ÚPN) about Slovakia’s communist past.

“And when it comes to coming to terms with the past, we Germans are experts – if I may say so, unfortunately.”

Gehring added that Germany has had experience coming to terms with its Nazi past, and also with events under communism in the former German Democratic Republic (East Germany). In this process, it is crucial for the victims of totalitarian regimes to experience justice, according to Gehring.

In connection with the development of civic society, the KAS cooperates mainly with the non-governmental organisation the Permanent Conference of Civic Institute (SKOI) and, on European topics, with the NGO the Centre for European Policy (CEP).

According to Gehring, both of these NGOs are doing very useful and good jobs, especially by organising discussions and meetings with citizens where selected lecturers deliver speeches. It is good that they are doing it in a bipartisan way, as a political education for society,” Gehring said of his Slovak partners.

In his interview for The Slovak Spectator, Gehring further stressed that for a pluralist society, the development of minority rights is also important, and so the KAS has focused on this topic as well by providing financial support for activities in Slovakia.

Turning to the subject of Jewish relations, Gehring stressed that the KAS was proud of its cooperation with the Institute of Judaism, part of Comenius University, in Bratislava. Since 1993, Gehring said, the KAS has also had close, even friendly, links to the Jewish community. ‘We Germans have a responsibility to work so that racism, anti-Semitism and the terrible impact they had in the last century do not occur again.”