KNOWLEDGE of foreign languages has become vital as globalisation has taken hold. So German Federal Foreign Minister Frank-Walter Steinmeier has introduced Schools: Partners of the Future (PASCH), an initiative that supports teaching German as a foreign language. 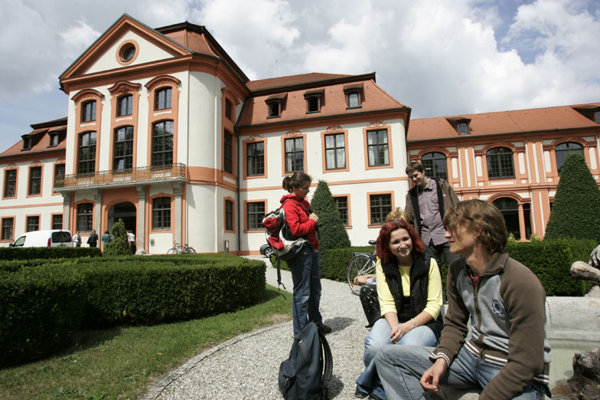 A good knowledge of German gives Slovak students a better chance of studying at a German university. Above: the University of Eichstaett. (Source: ČTK)
Font size:A-|A+

KNOWLEDGE of foreign languages has become vital as globalisation has taken hold. So German Federal Foreign Minister Frank-Walter Steinmeier has introduced Schools: Partners of the Future (PASCH), an initiative that supports teaching German as a foreign language.

As part of the project, the Goethe Institute is doubling its network of partner schools by cooperating with 500 secondary schools around the world that offer the Deutsches Sprachdiplom (certificates proving near-native or native fluency) at the conclusion of a student’s German language study.

“This enables Germany to accumulate long-term partners around the whole world who introduce the German language and culture at a very early age,” Hans-Georg Knopp, secretary general of the Goethe Institute, said at a contract signing with the first partner schools, in New Delhi, India, on June 9.

In Slovakia, the Goethe Institute has selected two secondary schools: one each in Dolný Kubín and Nová Baňa.

“For Slovakia this means that the two schools are added to the existing network of partner schools,” Evelyn Regenfus, the head of the language department at the Goethe Institute in Bratislava, told The Slovak Spectator. Currently, the bilingual secondary school in Poprad, the German-Slovak school in Bratislava and 26 secondary schools offer extended German study and the Sprachdiplom DSD II in Slovakia.

For the schools in Dolný Kubín and Nová Baňa, participating in the three-year PASCH project means the opportunity for their students to attend international language courses in Germany and for their teachers to receive fellowships for further education in German. The Goethe Institute will also provide the schools with teaching materials including recordings, maps, dictionaries and some technical support in the form of laptops or data projectors.

The Goethe Institute will also provide education experts to advise the German teachers on how to present the material to students.

“The Goethe Institute has employed teaching experts who will take care of these schools,” Regenfus told The Slovak Spectator. “Michael Hauke from the Goethe Institute in Budapest is in charge of the Slovak schools. He also oversees three schools in Hungary and one in Slovenia.”

The secondary school in Dolný Kubín found out about the PASCH project directly from the Goethe Institute.

“The Goethe Institute informed me about this project because of my experience teaching and at this school,” Dáša Janigová, a German teacher known for her enthusiasm, told The Slovak Spectator.

The school then filled in questionnaires which were used to eliminate some schools and advanced others to the second round of selection. At that point, Regenfus and Hauke personally visited the schools to see their teaching conditions and talk with teachers and students. Hauke also visited some of the German lessons to see how the language was being taught.

Each school picked for the project has to meet a number of conditions.

“It has to provide extended education in German and teach it as the first foreign language students are introduced to,” Regenfus told The Slovak Spectator. “The school must have qualified teachers who are willing to continue their training; it must be interested in an exchange programme with German schools; and it has to be willing to participate in the partner schools’ projects.”

The benefit to the schools

The Slovak schools hope that their involvement in the project will make learning German more rewarding for their students.

“For me, as a German teacher, the programme means expert help and support at our school,” Janigová told The Slovak Spectator. “Cooperation with Hauke will help us, for example, when creating and carrying out various projects.”

Both Janigová and Radovan Mádel, the vice principal at the Gymnázium F. Švantnera in Nová Baňa, note that English is more in demand among students than German.

“They consider English to be the easier language,” Mádel, who also teaches German, told The Slovak Spectator. “The different suffixes, tenses and word order in German are the main problems for students. So if they think it’s enough to learn one foreign language, they learn English.”


Janigová hopes that students will be motivated to learn German upon finding out that the PASCH programme will be around for three years.

The PASCH programme also addresses this issue. Janigová has already started teaching German to 6-year-olds at a primary school in Dolný Kubín.

“These are the youngest students learning German in Dolný Kubín,“ Janigová told The Slovak Spectator. She said her hope is that the students will grow up with an interest in German.

Though the programme is just underway, the schools say they have already reaped some of the benefits.

The Goethe Institute co-organised performances of plays in German, a rap concert that used Schiller’s poetry as lyrics and workshop for the schools. Six students attended a three-week study stay in Germany during the summer.

“Three of our students and three students from Nová Baňa were selected to attend an exchange programme along with students from other European Union countries,” Hacaj told The Slovak Spectator.

A theatre project is also in the pipeline.

“In mid-November, teachers from the participating schools will attend a lecture in Budapest for those who will later lead the German theatre project at their schools,” Janigová said.


The project is to rehearse a German play and perform it in competition with the other schools.

“The first performance will take place here in Dolný Kubín,” she said. “Then we will take it to the festival in Budapest, where schools from Slovenia, Hungary and Turkey will meet. The winner will go to the worldwide theatre festival in Berlin.”

The secondary school in Dolný Kubín will also receive an assistant German teacher to help with the project.

“The plan so far is that a native German speaker, a university student in his final year of studying to be a teacher of German as a foreign language will spend six months at our school,” Janigová told The Slovak Spectator. “This will be our first experience with such a teacher. He will arrive in January and stay the entire semester.”

The schools and the Goethe Institute in Bratislava report that they are satisfied with the programme’s results so far.

“The cooperation already looks like it’s going to be a success,” Regenfus from the Goethe Institute in Bratislava told The Slovak Spectator. “The German teachers are very motivated. The students returned from their summer language stay in Germany full of experiences and enthusiasm. Meeting and getting to know other countries and cultures definitely broadens horizons.”

She added, “This project shows how important it is to learn foreign languages, and German in particular. German is the most spoken language in Europe, as it is the mother tongue for about 100 million people.”


More of topic: Foreigners in Slovakia