THE BRATISLAVA water utility company Bratislavská Vodárenská Spoločnosť (BVS) has begun an extensive restoration of the water source on Sihoť, an island on the Danube, to turn it into a museum. The source will continue to contain the original equipment, but new roads and space for parking will be added. 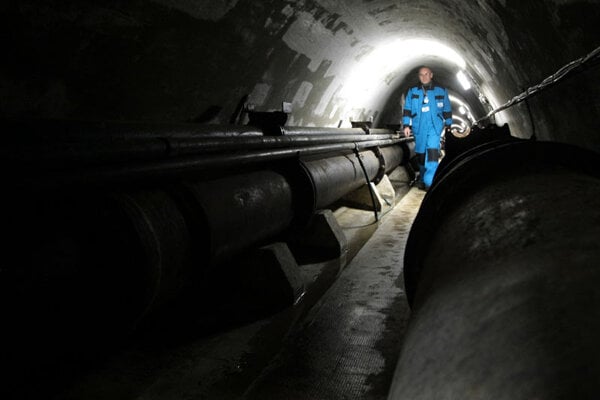 The tunnel will be made accessible to the public. (Source: SITA)
Font size:A-|A+

THE BRATISLAVA water utility company Bratislavská Vodárenská Spoločnosť (BVS) has begun an extensive restoration of the water source on Sihoť, an island on the Danube, to turn it into a museum. The source will continue to contain the original equipment, but new roads and space for parking will be added.

Meanwhile, the tunnel under the Danube, which connects the river bank with the island, will be renovated. The reconstruction will last for about 10 months. According to the Sme daily, visitors will be able to walk through the tunnel in about a year.

The site lies in a protected zone that is not usually accessible to the public because it is the source of the city’s drinking water. The public is usually allowed to go there just once a year, during World Water Day.

“It was a great experience for us all to see the original equipment and walk in the tunnel under the river,” said Zenon Mikle, the company’s spokesman.

But the tunnel, which led under a road used by trucks transporting stone from a nearby quarry, is in desperate need of repair.

“The most demanding part – the reconstruction of the tunnel – is already underway,” architect Ľubomír Lapšanský explained. “It was so unstable that it could have caved in. The heavy traffic really inflicted damage.”

The tunnel is 132 metres long and about 80 centimetres under the road. It contains a water main that has supplied the town for almost a hundred years. The tunnel was built in the 19th century, when the water main was also put into operation.

“Except for three days during World War II, when there was no electricity, the water main has been operating continuously,” Pavol Helia of BVS explained. He said only the heavily worn-out parts will be replaced during the reconstruction.

“All the equipment is original: the windows, doors, and steel constructions in the tunnel,” he said. He added, jokingly, “Once people start visiting we hope they will stop thinking that the water piping begins in their bathroom.”

The water resource also contains one of the town’s first wells, which was first tested for supplying drinking water on July 22, 1882.

“This water resource has been used since 1886, when it was chosen to supply Bratislava,” Helia said. "The water main was prepared for operation in the 1870s.”

Today, the well has been replaced with 13 others on the island, and the water is still very clean.

“It has been supplied to households for 68 years without chlorination or any adjustments,” he said. “We only started chlorinating it in 1954, after big floods, when a hygienist ordered it.”

The water remains only slightly chlorinated, Helia said, and only for legal reasons.

The station that is located on the resource is a protected landmark. Its architecture resembles a castle.

Reconstruction of the interior and building the infrastructure required to accommodate visitors will cost about Sk25 million (€829,848).