THERE seems to be no end in sight to the turbulence that has rocked the country’s pension system. And neither political statements nor actual steps by the government suggest that the second pillar of the pension system, which allows Slovaks to save for their old-age pensions using private pension management funds, will reach calmer waters any time soon. 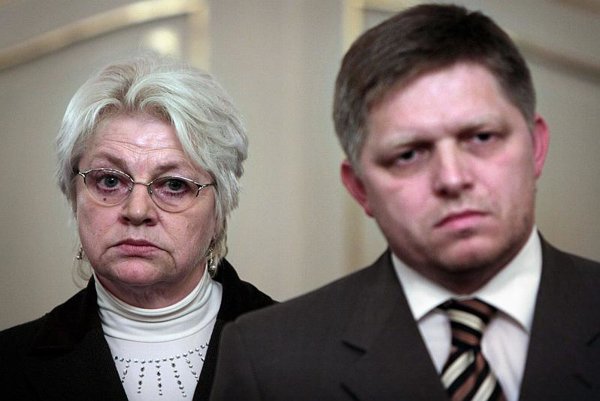 THERE seems to be no end in sight to the turbulence that has rocked the country’s pension system. And neither political statements nor actual steps by the government suggest that the second pillar of the pension system, which allows Slovaks to save for their old-age pensions using private pension management funds, will reach calmer waters any time soon.

October has been a particularly rocky period for the private pension funds: the Slovak parliament agreed to re-open the second pillar from mid November until mid-2009, allowing clients to return to the state-run pay-as-you-go system. In doing so, it cited as a reason the need to shelter people from the possible impact of the global financial crisis.

Meanwhile, Prime Minister Robert Fico has said that his government would even consider expropriation if it feels that pension fund management companies are threatening the savings of their clients.
The director of the state-run social insurer, Sociálna Poisťovňa, Dušan Muňko, has also made a series of strong statements directed towards private pension companies, even suggesting, in an interview with the Sme daily, that people who entered the second pillar have already lost their savings.

The Fico government previously opened up the second pillar in January 2008 for the first six months of this year, allowing people the opportunity to return to the publicly-managed scheme.

In 2005, when the government of Mikuláš Dzurinda reformed the pension system, more than 1.5 million pension savers joined the second, or so-called capitalisation, pillar of the system, which allows contributors to pay into privately-managed funds.

Despite Fico and Muňko’s comments, market watchers and the central bank have said that they do not foresee any serious threat to clients of the second pillar, while private fund managers say that it is the instability caused by the repeated opening of the system that might harm their clients.

Critics of the prime minister, as well as the pension fund companies themselves, say that by repeatedly opening up the pillar, the government is in fact looking for ways to replenish the coffers of the state-run social insurer. Analysts have also described the government’s comments on the second pillar as unfair.

However, Fico denied that the cabinet was opening the second pillar in order to tap more finances for the state budget.

“We are not opening the second pillar because we need money,” Fico said on October 25, as quoted by the SITA newswire.

According to Fico, the measure is a reaction to the depreciation of savings in the second pillar, which in his words is “becoming dangerous”.

However, the budget of Sociálna Poisťovňa does count on the arrival of 150,000 savers, along with their pension savings, from the second pillar, and assumes a one-off increase in its revenues of Sk6.97 billion (€231.4 million).

The insurer also expects its revenues to swell due to a reduction in the volume of old-age pension contributions it would otherwise have to transfer to pension fund management companies, according to the draft budget approved by cabinet.

Sociálna Poisťovňa will only begin processing applications after January 1, 2009, after parliament moved to delay the administrative burden given the existing work associated with the introduction of the euro and readjustment of pension values from January 1, 2009, SITA wrote.

The Slovak Association of Pension Fund Management Companies said that the government is in fact using the global crisis to help the state-run social insurer re-fill its empty coffers.

“I see the effort to reopen the second pillar as an abuse of the global financial crisis to cover the debts of the social insurer Sociálna Poisťovňa, since even based on the recent statements of its general director, the insurer does not have enough money, even through cross-funding between its individual funds,” secretary of the Slovak Association of Pension Fund Management Companies (ADSS) Ivan Barri told The Slovak Spectator in an earlier interview. “Since they cannot solve the situation in any other way, they are trying to solve it this way.”

As for the option of keeping the second pillar open for good, Barri said that free entry and departure would have an unfavourable impact on the management of Sociálna Poisťovňa, and prevent the pension fund management companies from performing in the way they are required to by law.

Meanwhile, the prime minister also said the pension fund management companies should faithfully inform their clients about the state of pension funds, mainly as regards the current drop in the value of pension accounts.

“I am asking pension fund management companies to start telling the truth about what is now happening, about the situation in pension funds and about the depreciation of people's money,” Fico said, as quoted by SITA. “We will carefully go through the statements of DSS [private pension funds] over the next few days. Unless we see a change in the quality of information provided by DSS, then we will once again debate this topic.”

Head of the ADSS Peter Socha responded that he does not really understand the prime minister's statements since the pension funds already release the data, as required by regulations.

The Governor of the National Bank of Slovakia (NBS), Ivan Šramko, said on October 28 that the money in private pension fund management companies is not at risk, according to SITA. On the contrary, the money could help the state develop its economy, he added.

He suggested that these funds could be used very well in the form of a specific government debt issue that the pension funds could buy, for example to finance highways or other state needs.

“We have a relatively unique chance to make use of this money, which is of a long-term nature and which is already now of great value,” Šramko said.

He pointed out that the net value of the assets in the second pillar amounts to more than Sk60 billion (€2 billion).

“From the perspective of the NBS, the system is good, the system works, we have sufficient possibilities for its regulation and supervision,” Šramko said as quoted by SITA.

Peter Goliáš, an analyst with the Institute for Economic and Social Reforms (INEKO), criticised what he called misleading statements by members of the government about the disadvantageous nature of the second pillar. Goliáš said statements comparing the pension fund management companies to failed non-banking deposit companies, or claims that people in Iceland will not get anything from their pension funds and that the same fate threatens Slovakia, fall into this category.

“Lies kill any serious discussion, destabilise savers and, in combination with the opening of the second pillar in a time of crisis, threaten its purpose, which is the protection of Slovakia from the negative impact of an ageing population,” Goliáš told The Slovak Spectator. “The government, led by the prime minister, is taking over a considerable share of responsibility. Because today it is most likely that the current crisis on the capital markets and also in the second pillar will disappear, while the crisis in the first pillar, a consequence of people’s ageing, will only continue to emerge.”

As to whether this is will be the government’s last change to the second pillar, analysts are sceptical.

“The government will be trying to make as many people leave the second pillar as it needs to fill the gaps in the state budget,” Goliáš said. “If less people leave, it can be expected to adopt measures that will disadvantage savers in the second pillar. The labour minister for example has suggested the possibility of prolonging the minimum time for saving from 15 to 20 years.”

Threats of nationalisation are making savers uncertain and thus weakening the second pillar, according to Goliáš. They are also attacks on the ethic of saving for more difficult times, he added.

“The consequences for Slovakia could be that we turn into a country which ‘ate yesterday what they saved for tomorrow’,” Goliáš concluded.