HUNDREDS of mourners packed into the cemetery below Ostrva, in the High Tatras, on October 25 to attend an annual tribute in memory of those who have lost their lives in the mountains, the SITA newswire. 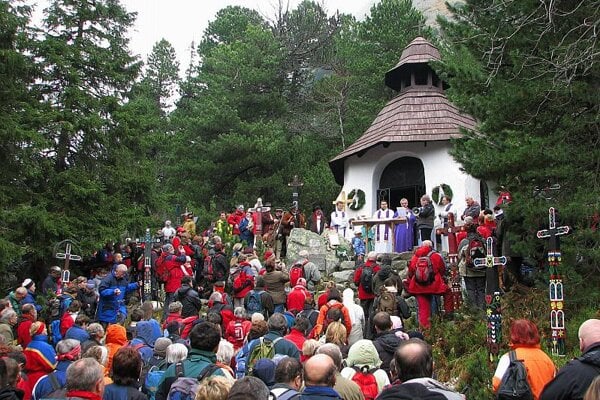 Hundreds gathered at a Mass commemorating those who have died in the mountains. (Source: SITA)
Font size:A-|A+

HUNDREDS of mourners packed into the cemetery below Ostrva, in the High Tatras, on October 25 to attend an annual tribute in memory of those who have lost their lives in the mountains, the SITA newswire.

Fourteen people have died in the High Tatras in recent years, with 13 of those deaths occurring in this year alone.

Jaroslav Švorc, the head of the Tatra Mountain Rescue Service, recounted that the people had overestimated their abilities, made absent-minded mistakes, or fallen victim to bad weather. The remembrance ended with a Mass for all the victims.

Many of the mourners had two specific anniversaries on their mind.

This year is the tenth anniversary of the death of professional mountain rescuer Ľubomír Jurský. And in December, it will be 50 years since an avalanche in Lomnické Sedlo claimed the lives of four members of the national downhill skiing team, who were aged 12 to 18.

The remembrance on October 25 included several members of that team who were lucky enough to escape with their lives.

Boards are added to the symbolic cemetery each year with the names of those who have died in other mountain ranges closely connected to the Tatras as well. Seven such boards were added this year.
According to Dominik Michalík, one of the cemetery’s trustees, the actual number of people who have died in the High Tatras far exceeds what’s listed at the cemetery.

To this day, 1,097 people are known to have lost their lives there. But many more, especially anyone who died during war time, remain unknown.

Mountain guides first laid wreaths at the symbolic cemetery on November 1, 1936. It was opened in the summer of 1940.