THE GOVERNMENT has acknowledged that Slovakia’s economy will not grow at the pace forecast in the draft state budget sent to parliament only three weeks ago. A consolation is that the country should still be able to take pride in having one of the fastest-growing economies in the region. 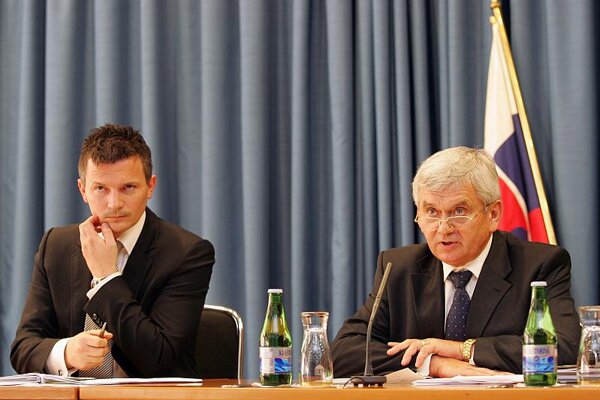 THE GOVERNMENT has acknowledged that Slovakia’s economy will not grow at the pace forecast in the draft state budget sent to parliament only three weeks ago. A consolation is that the country should still be able to take pride in having one of the fastest-growing economies in the region.

After the global financial crisis had forced financial institutions, governments and think-tanks to revise their economic forecasts, Slovakia’s Finance Ministry followed suit by revising its macroeconomic prognoses for the forthcoming years on November 4. It now believes that Slovakia’s economy will grow by only 4.6 percent in 2009, not the 6.5 percent used to calculate the draft state budget for 2009.

The draft budget was approved by Prime Minister Robert Fico’s cabinet on October 15. The ministry predicts growth will accelerate to 5.3 percent in 2010 and reach 6.1 percent in 2011. A revision of forecast tax revenues will follow, the ministry said.

The prime minister said that the revision of macroeconomic data does not make him nervous since Slovakia will have one of the fastest-growing economies in the European Union. According to Fico, other countries are facing greater financial problems and having to nationalise banks and pour large amounts of money into their financial sectors.

“Slovakia has not had to do this and will have the highest economic growth within the EU, so what more can we wish for?” Fico said, as quoted by the SITA newswire.

Fico also suggested that the government would not be forced to curb any of its social programmes.
“Everything that we have planned for 2009 will be fulfilled to the very last crown,” Fico said.
The Finance Ministry’s Institute for Financial Policies has also revised down this year’s economic growth estimate from 7.7 percent to 7 percent.

The revised figures had been widely expected; the commercial banks had already made estimates very close to the Finance Ministry’s new numbers.

A downward revision in the forecast growth of the Slovak economy was expected as a consequence of the global financial crisis, which has resulted in downward revisions in other EU countries, said an analyst with UniCredit Bank, Ľubomír Koršňák.

“Since Slovakia has a small, open economy, a slowdown in economic growth and in particular in demand from our most significant trading partners should also have a negative impact on the growth of the Slovak economy,” Koršňák told The Slovak Spectator.

Juraj Valachy of Tatra Banka said he had also expected the move since commercial banks had already made considerable changes to their forecasts.

“The fact that the macroeconomic forecasts and also the predictions of tax revenues have been revised is a very commendable act,” Valachy told The Slovak Spectator.

“We expect economic growth to be 5.5 percent but also see some risks that it might be closer to the ministry’s estimate,” Valachy said.

Koršňák said that the current forecast of the Finance Ministry does not fall far from his bank’s forecast of 4.2 percent. However, in contrast to Valachy he considers the ministry’s estimate to be slightly optimistic and says the main risk is of slower growth.

“We regard the Finance Ministry prognosis for GDP growth in 2009 as realistic,” said Slovenská Sporiteľňa bank senior analyst Mária Valachyová.

“We have also cut our forecast for economic growth for next year from 6.0 percent to 4.8 percent, to similar levels as the ministry, due to worsening global economic developments and a deepening of the financial crisis” Valachyová told The Slovak Spectator. “We expect a slowdown in loans, which will be reflected in slower growth in investments and consumption.”

According to Valachyová, growth forecasts in the eurozone have undergone significant downward revisions, which have also been reflected in lower export growth predictions.

“The economy should next year be pulled along mainly by domestic demand, specifically household consumption and government spending,” Valachyová added.

The ministry’s expectations are similar, though it expects a somewhat higher growth in investment and slower growth in domestic consumption, she added.

“The market has been expecting this move and it is likely that most institutions preparing economic forecasts had already revised their predictions downwards over the past couple of weeks,” Valachyová said. “The market consensus is moving to around 5 percent [growth] for next year, as compared to the 6 percent estimated a month ago.”

Market watchers agree that the revised estimate of growth is likely to have an impact on the state budget for 2009.

If parliament does not revise the state budget and it remains based on the October forecast, it is likely that the public finance deficit will not be maintained next year without additional cuts during 2009, Koršňák said.

Valachy said that nominal GDP could drop by Sk44 billion as result of the slowdown, which according to a simplified calculation would mean a Sk10 billion drop in planned tax and payroll tax revenues.
“Either some spending is cut or the deficit will increase,” Valachy said. “I hope the first alternative will be chosen. At first sight, cutting Sk10 billion seems like quite a lot, but even with this reduction the nominal growth in total revenues for the public administration would still be very decent, representing a 14 percent rise year-on-year.”

As far as the state budget (rather than the total general government budget) is concerned Valachyová expects the lower predicted economic growth (and hence domestic consumption) will result in tax revenues falling by roughly Sk5 billion.

“Lower payroll taxes should be added as well, which might reduce public administration revenues by further billions,” Valachyová told The Slovak Spectator. “The total fall in revenues could reach several tenths of a percent of GDP: about 0.3-0.5 percent of GDP.”

Of course it is up to the government whether this drop in revenues is reflected in a reduction in spending or an increase in the budget deficit, currently predicted to be 1.7 percent of GDP, she added.

“Since this year it has not met its promise to the European Commission to cut the deficit, I expect that next year it will also prefer to increase it, especially since it will be a pre-election year,” she said.

As for possible further revisions to the macroeconomic growth forecasts, Koršňák said that these will depend on developments in Western European countries, since their ability to tackle the expected slowdown will also affect the performance of Slovakia’s economy. Valachy also said that he doesn’t presently see any reason for further revision.