AN INCIDENT at a football match in Dunajská Streda on November 1 has become the most recent cause of tension between Slovakia and Hungary. 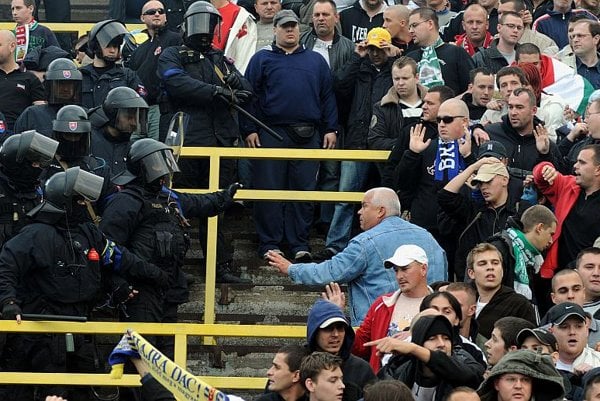 Police and fans confront each other in Dunajská Streda. (Source: SITA)
Font size:A-|A+

AN INCIDENT at a football match in Dunajská Streda on November 1 has become the most recent cause of tension between Slovakia and Hungary.

Officials from each country are accusing the other side of politicising the incident, while a think-tank has described the situation as a symptom of the overall breakdown in the countries’ relations.

The fact that the incident took place in Dunajská Streda is important, because the south-western town has the largest proportion of ethnic Hungarians of any in Slovakia. The match was between DAC, the local team, and Slovan Bratislava.

At some point in the match, violence erupted in the crowd, causing the referee to suspend the action on the pitch. Police intervened to suppress the violence, injuring dozens, including seven who had to be taken to hospital. Police also detained 35 fans – 15 for Slovan Bratislava, three for DAC and 17 identified only as Hungarian citizens – pending charges of assaulting police officers and committing a public disturbance.

Confrontations occurred even before the match began, prompting police to escort 1,000 Slovan fans to the stadium. Authorities also confiscated dozens of banned items as fans entered, including signal rockets, wooden bats, brass knuckles and boot spikes. Nonetheless, some fans were able to smuggle in signal rockets, and launched them onto the pitch during the game.

Politicians in Budapest have criticised the police response as excessive and have alleged that the DAC fans were targeted. Official requests were made for Slovakia to launch an investigation.

But the Interior Ministry is defending the operation by pointing out that the police were attacked first, and saying swift action was needed to prevent the violence from escalating into a full-scale riot.

In addition, the Defence and Security Committee, which oversees police operations, agreed that the amount of force was proportionate.

After meeting President Ivan Gašparovič on November 3, Interior Minister Robert Kaliňák told journalists that the police at the stadium had followed standard procedure.

“The police do not discriminate among rioters” he said. “They take action against both sides equally.”

“I consider it abnormal that a large part of extremists among fans perceive a football stadium as a place and a football match as a means for addressing historical and political events,” he said.
As soon as a day after the incident, about 150 people protested in front of the Slovak Embassy in Budapest. Witnesses reported seeing people burning the Slovak flag and chanting slogans of “We Won’t Take It Any More!”

On November 3, about 400 people took part in a peaceful protest organised by the Hungarian movement 64 Regions, according to the private Markíza TV station.

And two Hungarian villages with a sizeable Slovak minority reported on November 2 that someone had vandalised signs by painting over the Slovak translation of the village’s name.

On November 3, Hungarian Prime Minister Ferenc Guyrcsány stated that video recordings of the violence posted on YouTube.com show that the police’s response to the violence was disproportionate.
“It would be good to believe that the fans’ offence was not that they were Hungarians,” he said, as quoted by the ČTK newswire. He also condemned the burning of Slovak flags.

But he also brought up the fact that the Slovak Nation Party (SNS) is a member of Slovakia’s governing coalition.

“I would be happy if the modern history between Hungary and Slovakia was not determined by extremists and radicals, be they outside government or close to it,” he said.

Gyurcsány stated that the burden is on the state to prove that force is necessary and proportionate.
“We should not solve political disputes with the help of police batons,” he said.

He emphasised that Hungary is still unsettled by the incident, so he had asked Slovakia to investigate. He repeated this request in person to Prime Minister Robert Fico while in Warsaw on November 5 for a meeting of the Visegrad Four countries and regional partners, the SITA newswire wrote.

Politicians from Slovakia’s Hungarian Coalition Party (SMK) have also voiced their opinion on the incident.

Pál Csáky, the chairman of the SMK, alleged at a press conference on November 3 that it was President Gašparovič and Minister Kaliňák who were playing politics.

“We want to see evidence that police were attacked,” he demanded. “We want an analysis of whether the intervention was proportionate. We do not think that the police handled the situation well.”
Minister Kaliňák responded, “We cannot understand the statements by SMK representatives and the Hungarian government as anything other than politically motivated.”

“It looks like a brusque, disrespectful interference into Slovakia’s domestic affairs,” Slota said at a press conference on November 4, as quoted by the SITA newswire.

Slota even went as far as to claim that the violence at the football match had been staged by Hungarian intelligence allegedly in attendance.

Béla Bugár, the former chairman of the SMK, expressed regret that politicians are escalating the tension rather than trying to calm it.

“At this moment, it is no longer important what happened in Dunajská Streda,” Bugár told The Slovak Spectator. “Today, it is important to stop the escalation. It is not funny anymore.”

He added, “Relations are worsening, and I think that a huge part of the responsibility for this lies with politicians, regardless of whether they are from the governing coalition or the opposition.”

Grigorij Mesežnikov, president of the Institute for Public Affairs, called this an unfortunate but predictable development.

“Here, the tension between Slovakia and Hungary has been escalating for some time, between the governing coalition parties and the SMK,” he told The Slovak Spectator.

The tension is a logical result of Fico’s decision upon becoming prime minister in 2006 to include the SNS in the governing coalition, Mesežnikov said.

After all, it is the SNS that has repeatedly rejected any level of dialogue with Hungary and continues to foment hostility between the countries, he said.

“And the statements made by some of the representatives of other parties, including Smer, have been problematic as well,” Mesežnikov added.